After a hard match of Fortnite, maybe you should hunt down and take in a snack – even if it looks a little faulty. Your task this week is to “Consume Glitched Foraged items” in Fortnite, so here are the locations you need to visit to do just that.

“Foraged items” in Fortnite are usually the foods that you can find around the map and “consume”. These include bananas, mushrooms, apples, peppers, and coconuts.

For this week’s challenges though you need to find specifically Glitched Foraged items, which are new to the game’s files. It looks like these special Foraged items appear in the new Rift Zones that have appeared in Season 10.

Dataminers have found that the Glitched Foraged Items element is linked to a Rift Zone that’s due to appear over the Soccer Pitch area that’s between Tilted and Snobby Shores.

The New POI coming in replacement of the Soccer Stadium will have the “Feature” of “Glitched Forged Items”.

This means, we *could* be seeing the return of Hop Rocks, Shadow Stones, as well as alternate versions of Forged Items such as Apples, Banana’s, Mushroom’s & Coconuts. pic.twitter.com/zyTCEPKwlO

Where to find Foraged Items in Fortnite

Bananas and Apples are probably the least useful of the Foraged Items, because they just heal 5 HP to you bar if you’ve taken damage – meaning you can’t consume them if you’re at full health. Like the Lost Spray cans from last week, these items are spread around the map.

Mushrooms grant you 5 shield to your bar regardless of your health. While coconuts are gathered from Palm Trees which you have to hit with your pickaxe to make them appear. They’re versatile, meaning they heal either 5 HP, or give you 5 shields depending on what you need.

Finally, Peppers are a cool item that heal you for 5 if you need, but also increase your movement speed by 20%, which can be really useful for covering distance in the desert.

All of these Foraged items aren’t just lying around everywhere on the map though. They’re split up into the following locations: 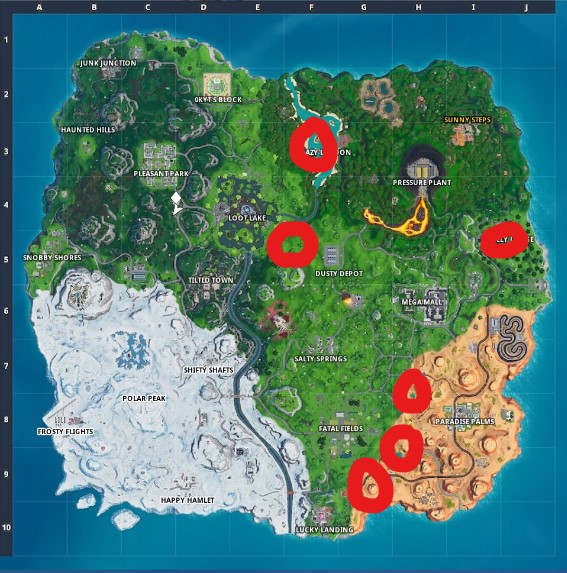 It’s interesting that there aren’t really many things to find in the snowy area of the map. Although the biome does feature heavily in other weekly challenges like visiting graffiti covered billboards and searching chests in containers with windows.

As mentioned above, Fortnite dataminers have linked these different glitched items to the Indoor Soccer Pitch area that’s just to the west of Tilted and east of Snobby Shores. You could also get there by going south from Pleasant Park, or north from Polar Peak.

Because they’re Glitched this could hint at the return of vaulted Foraged items like Hop Rocks, which give you a brief period of low-gravity jumps, and Shadow Stones which work very similarly to Shadow Grenades.

To complete the Junk Storm challenge though, the Soccer Pitch Rift zone should be your first port of call.

For more on the rest of this season’s Fortnite challenges, take a look at our full guide for every difficult regular and prestige task so far.