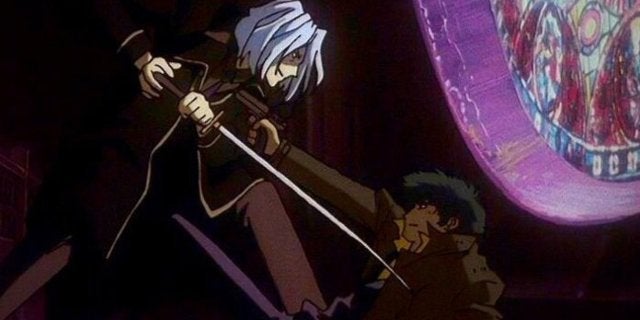 One of the most popular releases from the Funko line of collectible Pop! figures has been the “Moments” collection. These special moments highlights some of pop culture’s biggest events, but Funko has never quite strayed into anime. But that’s about to change with one of the most memorable scenes in all of anime as the final episode of Cowboy Bebop is going to be immortalized in a surprisingly adorable fashion. You won’t see Spike’s fight with vicious in the same way anymore!

As spotted by @FunkoPopHunters on Twitter, a listing for the special Cowboy Bebop Funko Pop anime moment, “Ballad of Fallen Angels,” has sprung up at GameStop for a scheduled release in November.

This release sees one of the final standoffs between Spike and his rival Vicious at the cathedral in the final episode of the series. It’s one of the most talked about fights among anime fans, and this iconic imagery has remained in fans’ minds ever since that final episode made its debut. It’s part of the reason why Cowboy Bebop has become one of the most prolific anime series among fans, and often hailed as a classic. This continuous popularity has also resulted in an upcoming live-action series.

A co-production between Netflix and Tomorrow Studios, the series has been confirmed to run for 10 episodes, and Alex Garcia Lopez (Marvel’s Daredevil) will direct the first two. Christopher Yost (Thor: Ragnarok) has been confirmed to write the first episode. Director of the original series, Shinichiro Watanabe, will be serving as a consultant on the new project.

READ  Fortnite’s Halloween event is back for Fortnitemares 2020

Andre Nemec, Josh Appelbaum, Jeff Pinkner, and Scott Rosenberg of Midnight Radio will serve as executive producers, and Yasuo Miyakawa, Masayuki Ozaki, and Shin Sasaki from the original anime’s studio Sunrise will also executive produce as well. Netflix officially describes the new series as such, “Based on the worldwide phenomenon from Sunrise Inc., Cowboy Bebop is the jazz-inspired, genre-bending story of a rag-tag crew of bounty hunters on the run from their pasts, as they hunt down the solar system’s most dangerous criminals. They’ll even save the world…for the right price.”

Cowboy Bebop was first produced by Sunrise in 1998. Directed by Shinichiro Watanabe, with scripts written by Keiko Nobumoto, character designer Toshihiro Kawamoto, and songs composed by Yoko Kanno, the series explores many existentialist philosophies as it follows the adventures of Spike Spiegel, and a group of bounty hunter misfits aboard the titular spaceship the Bebop in the year 2071.