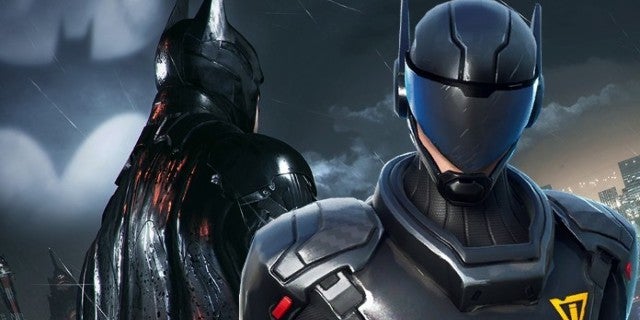 Fortnite players have peered into the future by datamining files to find some sort of Batman crossover that’s coming soon. Items players will presumably be able to use in-game within the next few weeks were found along with cosmetics and other assets that explicitly mention Batman himself. There’s no known date for when this will all come to the game, but Batman and Fortnite fans should take note that Batman Day is indeed coming up later this month.

The Batman assets were found in the games files by Twitter users like Lucas7yoshi who’s known for pulling out the most interesting parts of the game’s files for others to see. While most early versions of the game’s files pulled from updates are rarely decisive and look like they could be implemented in different ways, it seems pretty clear here that some sort of Batman crossover is coming.

A few of the assets which can be seen below include a Batman banner for players’ profiles, an Explosive Batarang, and the other a grapple gun Batman would use.

Fortnite players who’ve been around long enough to see some items come and go will recall that the Grapnel Gun and the Batarang closely resemble the effects of other items even if they’re different in appearance. The grapple gun was quite the divisive item when it was first added in Fortnite, like many of the items are, and the Batarang is reminiscent of a Clinger which was a grenade that stuck to whatever surface it hit.

READ  Oi! Now that we've got your attention go and catch all of the latest Fortnite news direct from Australia and New Zealand at @FortniteANZ! #FortniteANZ https://t.co/iilVDl23y2

It seems there will also be some other items and cosmetics added to the game. Additional datamines have pointed to Batman skins coming to the game, so we’ll have to see what else is included in this event.

It’s also worth noting that the Epic Games Store itself has been teasing something related to Batman recently. The store’s site was updated to show a collection of Batman games that seemed to encompass everything from the darker Arkham series to the LEGO Batman games which led people to speculate what Epic Games might be planning. Are all the games coming to the Epic Games Store, possibly for free? Is there a new Batman game releasing exclusively there? The Epic Games Store is supposed to update on September 19th, the same day when people are expecting the Fortnite crossover to go live, so we’ll know soon what’s in store.

The Dark Knight will rise in Fortnite soon

Call of Duty: Mobile launches October 1 with a bunch of familiar maps, but without Zombies