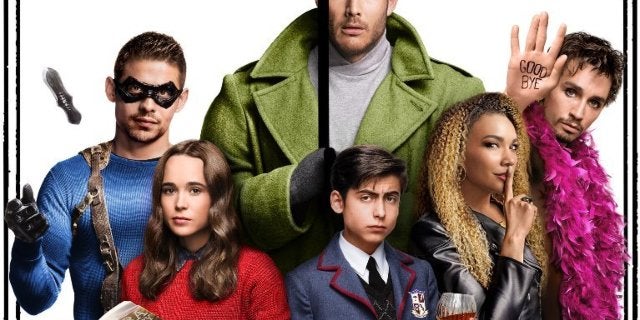 Netflix is getting the band of The Umbrella Academy back together again for a new season, which recently filmed. While fans will have to wait a bit longer to see the new season hit their TV screens, Umbrella Academy’s Justin Min decided to take fans behind the scenes with a video on social media, as well as several photos of the entire cast. The first thing he shared was a video of him on the set during a break in his day, and it seems everyone else was shooting at the moment. That gave him a chance to talk with fans, but midway through the video he realizes they are actually shooting right by him, and so he quickly has to quiet down.

Min said, “Everyone else is shooting right now so I have to be extremely quiet but i thought I’d give a little bts.” At that point you hear someone yell something and then a bell rings. “Oh wait, they’re shooting,” Min says. He then signals we need to be quiet, but keeps rolling.

Min then decides to share a bunch of photos from the filming of season 2, kicking it off with the caption “🗣Since we’re not on set rn we can be as loud as we want about all of these SUPER ADORABLE pics🗣[a thread]”

🗣Since we’re not on set rn we can be as loud as we want about all of these SUPER ADORABLE pics🗣[a thread] pic.twitter.com/IDQLj3tm6c

We first get a picture of Min with Klaus actor Robert Sheehan, followed by a picture of Aidan Gallagher and Kate Walsh filing a scene. We then see a photo of David Castaneda’s Deigo, and Tom Hopper’s Luther.

The next set of photos show Sheehan and Vanya actress Ellen Page on a roller coaster and Page at a restaurant. The last photo shows Min posing with Castaneda, and you can check out the photos above and below.

You can check out the official description for season 1 below.

“On the same day in 1989, forty-three infants are inexplicably born to random, unconnected women who showed no signs of pregnancy the day before. Seven are adopted by Sir Reginald Hargreeves, a billionaire industrialist, who creates The Umbrella Academy and prepares his “children” to save the world. But not everything went according to plan. In their teenage years, the family fractured and the team disbanded. Now, the six surviving thirty-something members reunite upon the news of Hargreeves’ passing. Luther, Diego, Allison, Klaus, Vanya and Number Five work together to solve a mystery surrounding their father’s death. But the estranged family once again begins to come apart due to their divergent personalities and abilities, not to mention the imminent threat of a global apocalypse.”

The Umbrella Academy season 2 currently does not have a release date.

We’re expanding the ways you can support your favorite Creators! Find all the details here: https://www.epicgames.com/fortnite/news/support-a-creator-comes-to-pack-purchases …

The #FortniteChampionSeries Finals has begun! Join the casting crew as they get you caught up on the action so far and what&#039;s to come: https://www.fortnite.com/watch pic.twitter.com/QPCCOc00B1