You can tackle Shadow Arena solo or as part of a team. Much like Overwatch and Apex Legends, there are various characters and classes to choose from – players will recognise many of the characters from Black Desert’s rich lore, though new characters will be added to the roster both pre and post-launch.

The rules for Shadow Arena are much the same as any other battle royale: you’ll be up against 49 players, you need to stay in the circle, find better gear and kill your foes. Alongside other players, you’ll also need to battle monsters that are scattered across the map which become increasingly more difficult to kill as the circle closes in.

While choosing a character with a specific skill set isn’t much of a divergence from the norm, what sets Shadow Arena apart is its use of skill levelling mid-game. Rather than launching from a bus or a helicopter, you traverse the skies as a black spirit before choosing where to land. Your character then has a choice of four skills you can utilise and level up as the match progresses.

During my hands-on, I played as Herawen, a ranged mage type. She had a choice of three attack-based elemental skills and a healing skill, alongside a standard staff attack and knife melee. As you kill the various creatures roaming, you’ll pick up potions, new weapons and gear and earn those all-important skill points.

I spoke with Shadow Arena’s lead producer Kwang Sam Kim about the character I used versus some of the more accessible characters for new players. There was a stealth character, Haru, who was recommended as a good starter choice for players of all skill sets, but having the ability to set people on fire was far more my style.

“Initially, players might think Herawen is weak as she is slower and the ranged attacks take time to recharge and dispel, but she’s actually one of the most powerful characters throughout all stages of the match,” says developer Kwang Sam Kim. He goes on to explain that a crafty player – such as myself – could level up Herawen’s healing tree skill to level three, where you can place the tree outside of the closing rings for several minutes, meaning you can lurk in the background and pick off unsuspecting players who are battling each other or a horde of monsters. 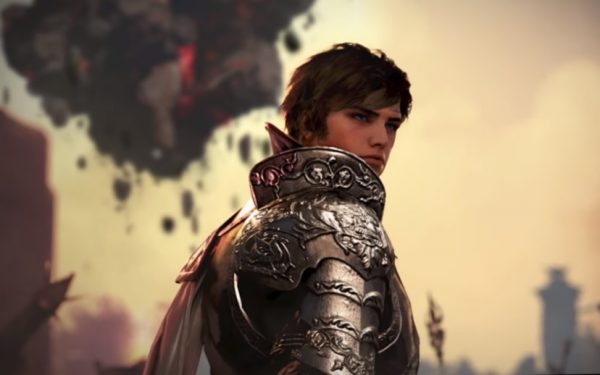 This will then “give Herawen player’s an advantage over close-combat melee types as they can remain outside the ring, cast elemental damage and be constantly healed by their tree”.

I used this late-to-the-circle party trick a few times during our match and I’m pleased to say VG247 won the Journo Royale in a final 1v1 against RPS. Good to see that playing all that Fortnite has finally paid off.

Despite having all the hallmark features of a battle royale, the team at Pearl Abyss were keen to stress that this is what they call an action arena fighting game, utilising real-time attacks to beat 49 player opponents and countless other enemies. It takes the best of Black Desert’s sleek combat system and puts it in a shiny new environment that’s accessible for new players and familiar for veterans.

The first closed beta test will run from November 21 – 24, and you can keep track of any further beta sessions here. You can expect to play it on PC, PS4 and Xbox One at launch sometime in 2020, and Pearl Abyss hopes to expand it on to Stadia in the future.

Impressions based on hands-on time at G-Star in Korea. Accommodation and travel provided by Pearl Abyss.

Fortnite Pipeman Location: Where to dance at the Pipeman