Fortnite&#039;s NFL Uniform Skins Are Back for the Super Bowl 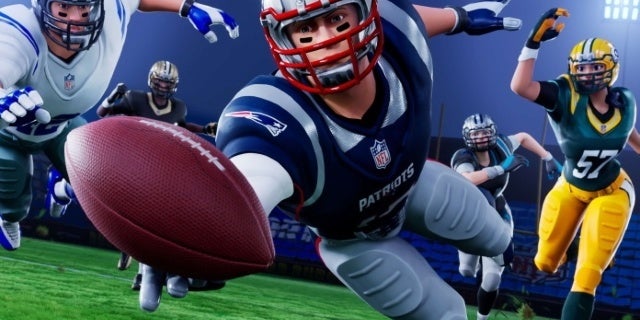 The popular battle royale video game Fortnite has once again brought NFL skins back into the game — conveniently, right before the biggest football game of the year, the Super Bowl. This isn’t the first time NFL uniform outfits have made their way to the video game, and it’s not likely to be the last, but this time also brings with it a new Team Rumble that pits the San Francisco 49ers against the Kansas City Chiefs.

But never fear: if you’re somehow averse to both the San Francisco 49ers and the Kansas City Chiefs, Epic Games notes that all 32 teams are available as part of the outfit, though the event itself is limited. The Item Shop should update with the NFL Outfits later tonight, but the special NFL Rumble should be available now. It’s unclear exactly when the outfits might leave the Item Shop, but the special Team Rumble runs through Super Bowl Sunday, so it’s likely that the outfits will leave at the same time.

“Adding to the football festivities, be sure to catch the Twitch Rivals: Streamer Bowl featuring Fortnite,” Epic Games states as part of the update on the NFL stuff. “Airing live on Twitch.tv/Fortnite on January 30, (Pre-Show starts at 5pm EST, with the main event beginning at 6pm EST) the event pairs your favorite Fortnite players with some of the NFL’s best, including the NFLPA Open winner, Kurt Benkert of the Atlanta Falcons.”

The @NFL returns to Fortnite!

Starting today, jump in-game and go head to head in NFL Rumble and tonight the NFL Outfits featuring all 32 teams come back into the Item Shop.

Read more in our blog: https://t.co/UXRSEXOco0

What do you think of the NFL uniforms in Fortnite? Are you excited to check out the new mode? Let us know in the comments, or hit me up directly on Twitter at @rollinbishop to talk all things gaming!

READ  Take your Fortnite style off the Island and into the real world! We’ve teamed up with @CASETiFY for a limited-edition collection featuring some of your favorite Fortnite characters. #FortnitexCASETiFYShop now: https://t.co/E1JEY7rbZC https://t.co/wKRy2S9Y6S

Fortnite is currently in its first season of Chapter 2, which started after the black hole event late last year basically destroyed the map and world. Chapter 2 – Season 2 was recently announced as starting on February 20th. You can check out all of our previous coverage of Fortnite right here.