Tales from the Borderlands 2 Reportedly in the Works at Telltale 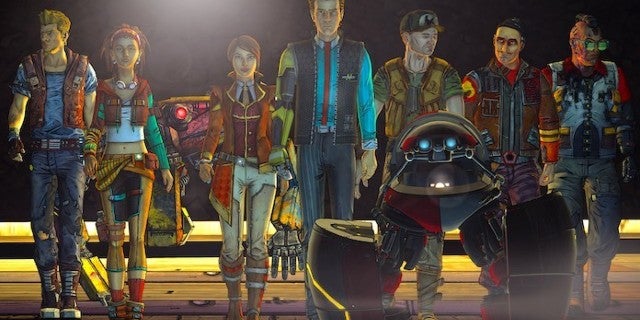 According to a new rumor, Telltale is working on a sequel to Tales from the Borderlands, which will be its next major project after The Wolf Among Us 2, which it announced back at The Game Awards 2018. The rumor comes from an anonymous Reddit user, which is usually reason enough to write it off, but this is the same user who leaked The Wolf Among Us 2 announcement before it happened. In other words, there’s reason to believe them, at least when it comes to scoops pertaining to Telltale.

That all said, Tales from the Borderlands 2 is allegedly Telltale’s next big project, however, it will be a few years before it’s revealed, as The Wolf Among Us 2 is reportedly not coming until 2021. The report also notes that Telltale and Gearbox are currently working on a new deal that will see the first season return as well, while AdHoc will be given the second season. The studio is currently working on The Wolf Among Us 2, which explains why we may not be seeing it for a few years.

With Wolf Among Us 2 not coming until 2021, Telltale is reportedly releasing Poker Night 3 this year. The aforementioned Reddit user — HereItIsMyDude — says this isn’t a big project, and that AdHoc has no involvement with it. What’s also noted is that the game will receive crossover items for Borderlands 3 and Fortnite, and will feature Bigby Wolf, Bruce Wayne, Lee Everett, and Rhys + Fiona. As you may know, The Walking Dead rights no longer belong to Telltale, but Skyboud, however, it’s understood the two have reached a deal to allow Lee Everett in the game. Beyond this, it’s noted the game will use Unreal engine, and players will be able to contribute to the conversation, but won’t have an actual voice. The report finishes this point off by noting Telltale hopes to announce the game at E3 and release it not long after, likely around the return of the first season of Tales from the Borderlands.

Lastly, and circling back to The Wolf Among Us 2, it’s noted that the game is currently on hold a bit as AdHoc figures out the game’s story, however, a ton of assets for the game have been made, and all the core mechanics, along with locations (Bigby’s place, the Woodlands, etc.), have been added.

Of course, all of this should be taken with a grain of salt given that it’s unofficial information, however, as mentioned above, the leaker in question does have a (brief) history of reliable Telltale scoops.