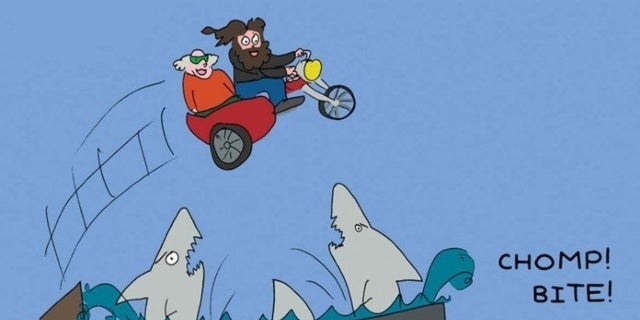 For decades, Tenacious D has set itself apart from a lot of other bands, whether in the realms of music, movies and television, and live performance. If you just can’t get enough of the band – which is made up of comedians Jack Black and Kyle Gass – and their unique point-of-view, a new graphic novel might be right up your alley. The Hollywood Reporter recently revealed that the band will be releasing Post-Apocalypto, a 180-page, full-color graphic novel inspired by the YouTube series and 2018 album of the same name. The book will be co-written by Black and Gass, with Black providing the art.

Post-Apocalypto will see the band explore a post-apocalyptic hellscape — unsurprisingly, given the title — and battle all-new forms of evil mutations in the wake of an atomic blast, as well as visit space and the White House, which are almost certainly two different places even in a radioactive future, all in the name of trying to save the world.

“True to the title, Post-Apocalypto finds Tenacious D thrust into a world of complete and utter destruction following the drop of an atomic bomb,” the original press release for the album reads. “Surviving the attack in classic cinematic fashion (a good old imperishable 1950’s refrigerator), the duo quickly learns that new forms of evil have spawned from the blast. One thing becomes apparent — for humanity to prevail, Tenacious D must save the world. With unimaginable twists and turns, an insane visit to the White House, a time machine, a space adventure, and the help of some tried and true daddy issues, Post-Apocalypto is as hilarious as it is political, and as brilliant and multi-faceted as its incredible creators. The songs are damn good, too.”

Post-Apocalypto will be published by Seattle’s Fantagraphics Books. The company is also planning a streamable read-along audiobook version, which would be voiced by Gass and Black, and feature some of Tenacious D’s music.

“When we finished this book there was only one publisher we ever really considered,” Tenacious D said in a statement. “Fantagraphics has been the shining beacon of creativity in comic books for decades. We are thrilled to release our magnum opus with the undisputed greatest and best comic book publisher in the world. Fantagraphics 4 life.”

The hardcover of Post-Apocalypto will be released in September, and will retail for $29.99.