The text was written in all capitals and accompanied by ASCII art of a middle finger. The issue was fixed shortly after catching the attention of some players.

The message appeared as a description when users searched for the “Steam Store” on Google, but simply typing “Steam” would display the regular message below the store page. The text seemingly came from a review on Metro Exodus, a game that was recently released on the platform. 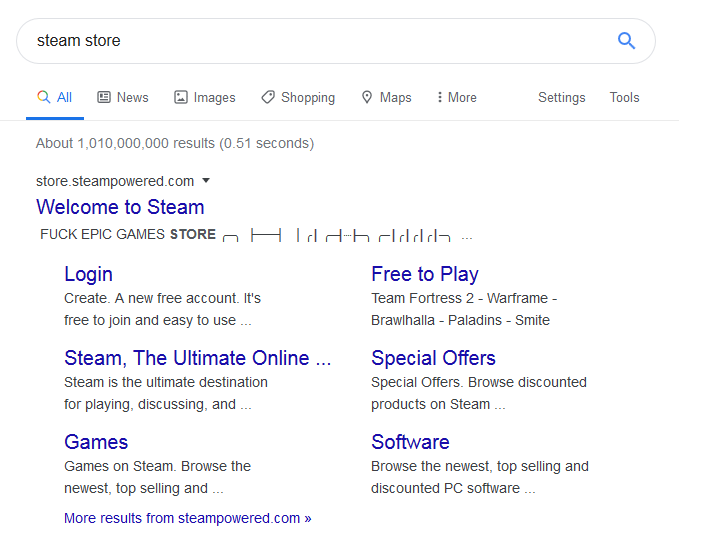 Adding “store” to the search query likely had a different result due to the repetition of the word on the page. The Metro Exodus listing on Steam is filled with anti-Epic messages like “Fuck Epic Games Store,” accompanied by text art of people giving a virtual middle finger to the company.

Metro Exodus recently made its way to Steam after its one-year exclusivity deal with Epic came to an end. Epic antagonists were quick to flood the Steam Store page with messages to manifest their dissatisfaction once the monopoly ended.

Epic has several titles under temporary exclusivity. For instance, Borderlands 3 is exclusive to the platform until April and players loyal to Steam have missed out on several limited-time events and the release of new DLC. The practice is unpopular amongst Epic opponents and longtime Steam players who wish to concentrate their library in one place.