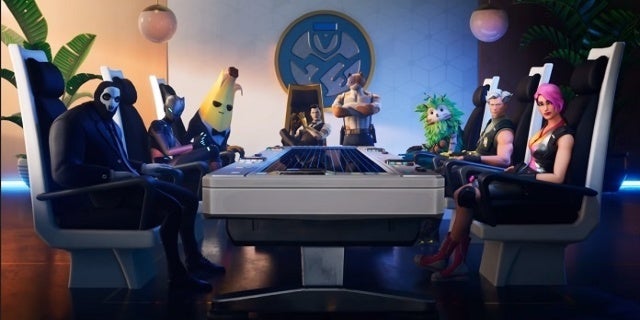 Fortnite’s second season of Chapter 2 introduced a new feature to the game: Chests and doors locked by scanners. Rewards await players who can outsmart the scanners and gain entry into whatever they’ve locked, but doing so requires a bit of work. It’s thankfully a pretty easy process though and won’t take players too long to get the hang of once they know what’s required to bypass the scanners and get their loot.

These scanners can be found throughout the game’s updated map in areas where the presence of the new henchmen is strongest. Some of these areas include The Shark and the Grotto among other spots. Within these locations you’ll see chests and doors with devices on or next to them that look like the ones shown in the tweet below.

New ID scanners in the Fortnite v12.00 update, must be a faction member to unlock pic.twitter.com/t87dv9WDDV

Try to use these scanners without any prep and you’ll find that you’ve been denied access. To get around this, you have two options: Either dress up like one of the henchmen or knock out one of the new characters and have the scanner scan them instead.

To go the nonviolent route, look for red phone booths located within these new areas. Hop inside one and you’ll be disguised as one of the henchmen and will be able to pass as them when the scanner checks you. Then you can open the door or chest while wearing your disguise and see what’s waiting for you.

If you’re the more confrontational type of player, you can take out one of the henchmen and used the knocked-out enemy to bypass the scanners. These characters found within the faction’s most active sites have only a bit of health, so taking them out shouldn’t be difficult. Once you do, you can pick them up and carry them over to one of the scanners. You’ll then be presented with an option to scan the henchman instead of scanning yourself which will then allow you to open whatever’s locked.

Locked chests and doors aside, one of the biggest parts of Fortnite’s latest season is the addition of a Deadpool skin. That skin isn’t unlockable just yet since it’s found further in the battle pass and can be unlocked after completing certain challenges, but you can go ahead and get started on those challenges now using this guide.