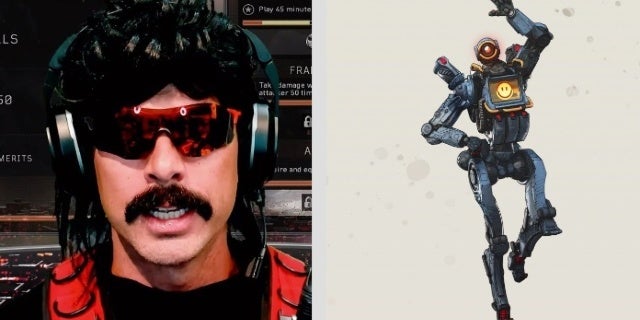 Dr Disrespect has been having a tough time finding a game he likes, of late. After letting loose on Overwatch and calling Fortnite “the corniest game in the history of video games,” the self-proclaimed greatest gamer in the universe now seems to be done with Apex Legends, as well. During a stream of the game, the Twitch star aired his frustrations with the title, claiming he has “zero interest” in the game. While Disrespect’s irritation with those other games was a bit more comedic, the Two-Time seemed rather calm, and even nonchalant in his distaste for Apex Legends, claiming that he knows “what every single fight is like,” now.

Of course, it’s not unusual for Dr Disrespect to drop a game and come back to it a short time later. Time will tell if the streamer is truly done with the game for good, or if this is just the latest example of the bombastic streamer airing his grievances. In the video, Dr Disrespect can clearly be heard battling some kind of illness, which he later (jokingly) attributed to Coronavirus. Naturally, Dr Disrespect claimed to have “crushed” the virus, which should come as a bit of a relief for his viewers.

Apex Legends actually owes quite a bit of its popularity to Dr Disrespect. The streamer gave the game a lot of attention when it first released, and the Two-Time addressed that in his latest stream claiming that he had a little bit of fun with the game “early on, but that was fun, I was learning, it was fresh.”

Born Herschel Beahm IV, Beahm once worked for Sledgehammer Games, developing maps for Call of Duty: Advanced Warfare. Beahm left Sledgehammer in 2015 to focus on streaming, where he gained a following on Twitch thanks to the over-the-top Dr Disrepect character. Since then, the streamer has gained more than 7 million followers, resulting in a TV development deal, and an upcoming, in-character memoir. During his streams, Dr Disrespect typically plays battle royale games, including Apex Legends and PUBG. With so much on his plate, however, it will be interesting to see if the streams start to take a backseat to the rest of his work.

Are you a fan of Dr Disrespect? Do you agree with his assessment of Apex Legends? Let us know in the comments or share your thoughts directly on Twitter at @Marcdachamp to talk all things gaming!

Put your best bigfoot forward. Check out the new Sasquatchin&#039; Emote in the Item Shop now!pic.twitter.com/7viR922d2q