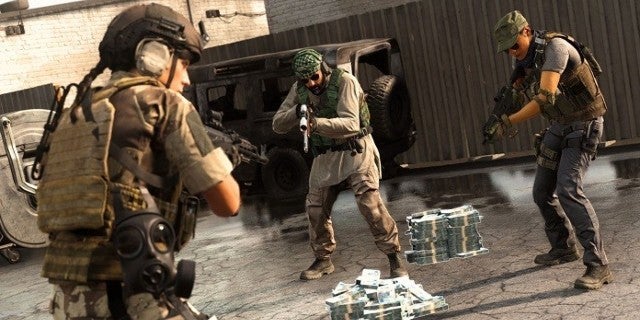 This week, Activision released Call of Duty: Warzone, a free-to-play battle royale game. The title has quickly proven to be a massive hit with gamers, but developer Infinity Ward is already looking for ways to make the experience better for Call of Duty fans. The team has confirmed that they are looking to up the number of players from 150 to 200, but it seems Infinity Ward is also testing out different team sizes, as well. As of this writing, the game allows for teams of three players, but the developer has internally tested options for four and five-player teams. The news comes from an interview with Infinity Ward studio head Patrick Kelly, conducted by USA Today.

“So let’s say you show up alone and just want to play solo … or if you show up with a buddy, you just check the box that says, ‘Don’t fill my squad,’ and you will just be a duo,” Kelly told USA Today. “I can tell you we have four- and five-player squads we are already playing with. But we want to launch with something we know works really well and we have tested to the nines and then play around with these different team sizes.”

It’s certainly a positive sign for the game’s longevity that Infinity Ward is already looking for ways to improve on the game. Free-to-play titles can only continue to thrive when they receive a healthy dose of support. Of course, Activision is no stranger to supporting games long after their initial release. Last year, the franchise made $1.1 billion in revenue. Part of that can be attributed to the release of Call of Duty: Modern Warfare, but Call of Duty: Black Ops 4 earned $487 million throughout 2019, predominantly because of the game’s DLC.

It will be interesting to see if Call of Duty: Warzone will be able to compete with other popular battle royale games, like Fortnite and Apex Legends, in the longterm. Warzone is already outpacing both of those games, but it’s hard to say how many battle royale games the market will be able to sustain. Of course, if there’s one brand-name that has proven to be lasting, it’s Call of Duty.

Call of Duty: Warzone does take a few cues from other popular battle royale games, but it also delivers an experience that remains faithful to the Call of Duty brand. In the game, players parachute into the battlefield, and immediately scrounge for cash and loot in order to buy Killstreaks and Loadouts, before taking on the other 149 players. Unlike other battle royale games, dying once does not necessarily mean the player is out of the game. Instead, they are thrown in the Gulag, where they have an opportunity to participate in a 1v1 Gunfight, where the winner gets to head back into battle. The game is available for download on PlayStation 4, Xbox One, and PC.

Are you excited about the prospect of four and five-player squads? Or do you prefer the current method? Let us know in the comments or share your thoughts directly on Twitter at @Marcdachamp to talk all things gaming!

A Short Hike, Anodyne 2 and Mutazione are free for keeps on Epic this week