Home » fallout » In times of isolation, Fallout 3’s Three Dog has got your back
falloutfallout 3Feature AFortniteLatest News From FortnitePCPS3PS4RPGShooterXbox 360Xbox One

In times of isolation, Fallout 3’s Three Dog has got your back

“300? What the hell? You said it was 100 caps!” I tell Moriarty, one of the many scumbags I meet after exiting my vault in Fallout 3. “I did say it was 100 caps. And as I recall, you said no. So now I’m saying it’s 300 caps. What will you say this time?” I grin in frustration and head outside Megaton in search for Silver instead, a woman who allegedly betrayed him by taking his money and escaping to Springvale, a ghost town in the whereabouts of Megaton.

The job involved getting my hands dirty to collect the debt, but I managed to talk my way out of it, lying to Moriarty about the outcome. What are the chances that he’s gonna leave the town anytime soon, anyway? No one wants to spend a minute out there. Silver quickly reaffirmed this to me: “The Wasteland sucks, kid. Just get used to it.”

This is quite the first impression of the outside world for someone who’s spend all their young life locked underground. No one in the vault, nor the questions from that G.O.A.T. exam prepared them to wake up one day and find out their dad had left home overnight. No school class spoke about how shitty things were on the surface. How hard the good people struggled to survive. But at least they all had Three Dog — and I’m glad I could count on him, too. 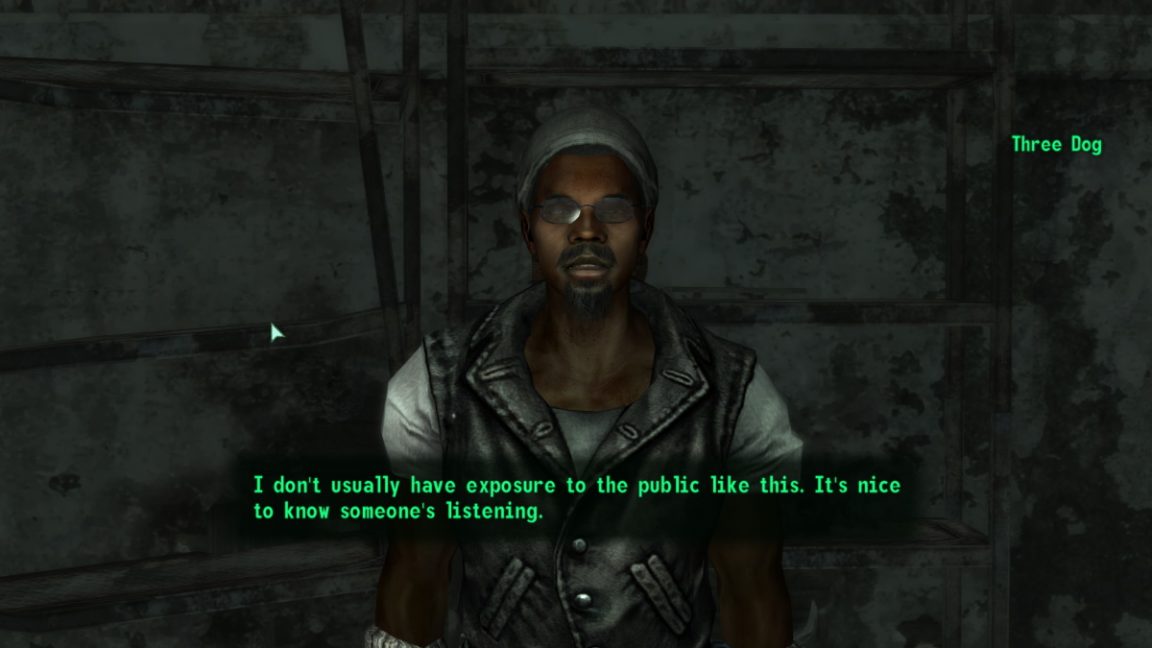 I hadn’t played Fallout 3 for years. I just wanted to take a couple of clean screenshots for this piece, but in reality, it was the chance to revisit one of the first and favourite RPGs of mine. My goal wasn’t to lose myself into side quests once more, though, since I have a job to maintain. The task, then, involved following the main story until I crossed paths with Three Dog, the guy behind Galaxy News Radio.

Around two hours later, I had returned to Washington D.C., or what was left of it. There’s a sheer beauty in these otherwise decaying landscapes thanks to meticulous environmental care behind them, but they present a rather grim reality. Traversing through the Wasteland always felt desolating. Despite knowing I was about to meet The Brotherhood of Steel on the streets and tag along until the radio station, the same feeling quickly kicked in once more.

But I was closer to my goal, and this gave me strength to carry forward. Three Dog always evoked such strength, providing all his listeners with encouraging words in between songs from The Ink Spots. Most importantly, he’s always done a good job keeping folks up to date with rumours, places to avoid, and the latest events. After meeting him for the first time, these events commence to involve you, the kid from Vault 101, and that initial sense of loneliness suddenly doesn’t feel as bad as before.

Depending on where you steer your karma level based on your deeds, these tales may vary. But if you’re like me and Galaxy News Radio is always playing in the background, more often than not you’ll be surprised with his own tales on your journey. There’s one in particular, where he sort of introduces you to his audience, that has left a mark on me after all these years. 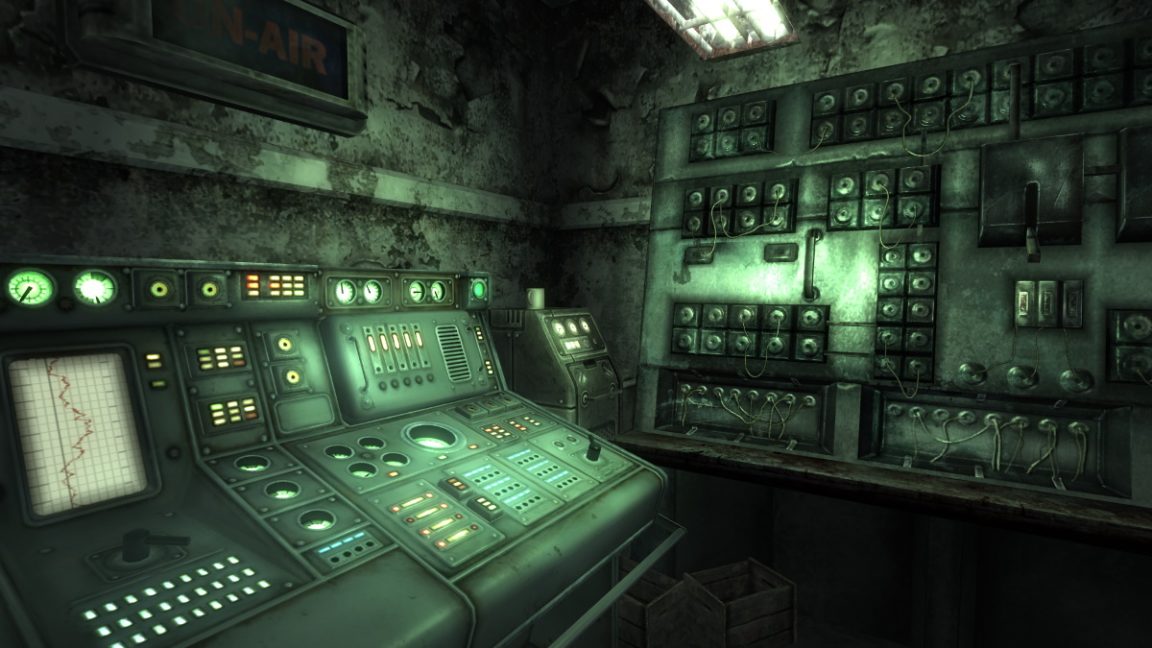 “See, James left Vault 101 without telling the kid why. Now, I’ve since learned that James is a scientist and is working on something big. Is that why he left the vault? Looks that way. So who knows, maybe James is going to save the world. Can’t think of a better cause than that. But James, if you’re listening… Your kid’s out, man, and he misses you. So you might want to find him before he gets swallowed up and spit out. And for all you other cats out there listening, if you see the kid from Vault 101 out there, give him a pat on the back and wish him luck.”

I literally stopped walking the first time I heard it, and just laughed in joy. A complete stranger now had my back, and I didn’t feel alone anymore. Every time a song ended, I eagerly hoped to listen to Three Dog again, not only to hear what the latest news were, but to also have a friendly voice on my side amidst super mutants and thieves. I was always greeted with a joke or an inspiring line that made me smile as I traversed the Wasteland.

Three Dog defended a principle he liked to call the Good Fight. Even though his station took place on a faction’s headquarters, he always stood on his own line, voicing the truth to the people who needed it the most. He often let me know that things were going to be alright. No matter how uncertain and scary the path ahead seemed. 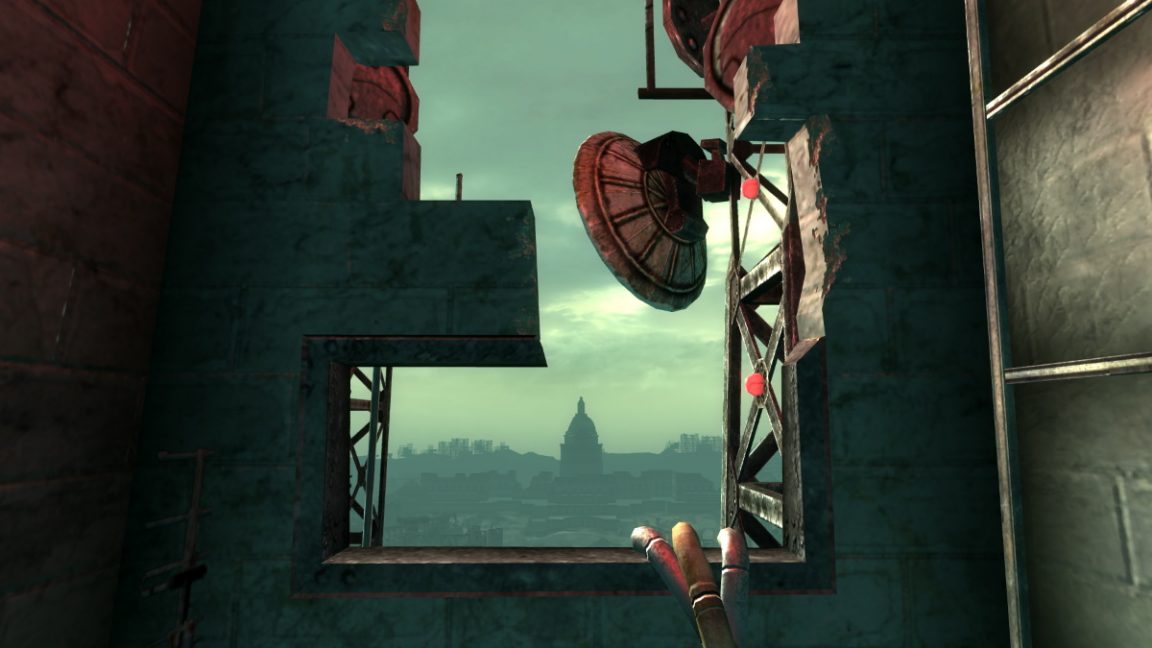 He’s been on my mind during these past few weeks, and I think we all should follow his example. We all share the same uncertain path, but we can make a difference by lifting each other up, even when the odds don’t seem to be on our side. What might seem as the smallest gesture can make someone’s day. Sometimes that’s all we need, and I assure you it will be treasured forever.

Even though my Speech stat wasn’t remotely developed due to my short play time, I actually succeeded in that one dialogue option that lets you skip Three Dog’s quest. The task was over, but I felt like I owed it to him, for old time’s sake. I went to the heart of D.C. and fixed his antenna. Now, from Megaton to Girdershade, Paradise Falls to the Republic of Dave, everyone could hear my story. I knew I could count on him no matter the distance.

“From here on in, it’s bye-bye stupid static, hello magnificent music. So sit back, relax, and absorb these classic tunes.”

Critical Hit! From D&D to Pokémon, tracing the origins of the gaming phrase