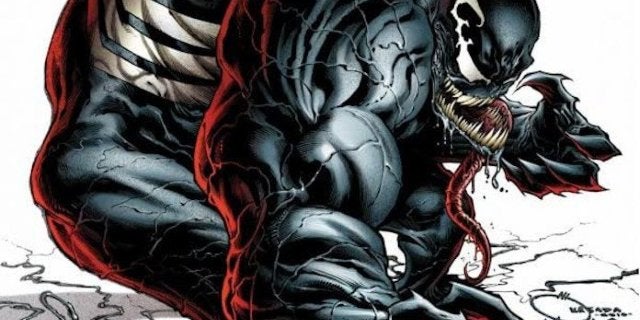 During this COVID-19 pandemic quarantine, writer Rick Remender has been digging through his old files. He’s revealed several items from his time at Marvel Comics. He’s unearthed early designs for Sam Wilson’s Captain America costume as well as his abandoned plans for the X-Men line. Now he’s come across a pitch for a Spider-Man and Venom crossover event he put together in 2011. This was at the same time that he was writing the ongoing Venom series starring Flash Thompson, then host to the symbiote. Eddie Brock, the original Venom, had bonded to another powerful symbiote called Toxin at the time. The event would have revolved around the symbiotes entering their spawning season. This would have attracted the attention of alien symbiote hunters:

“Symbiote spawning season beginning with Eddie Brock/Toxin going into heat and beginning a mass procreation bid. This is contained to New York and dealt with by Spiderman, Venom, and, eventually, our SYMBIOTE HUNTERS from outer space. Given we’ll have spent 7 months building Eddie as Toxin in Venom, it’ll pay out nicely when he’s the one who goes into heat and spreads the symbiote spores all over.”

From their, Earth is soon taken over by symbiotes. Powerful symbiotes like Carnage become warlords, claiming major cities as their domains.

Digging back into the HD. Here’s a rough planning doc for my shelved 2011 War of the Symbiotes story for Venom/Spider-Man and some pitch art I mocked up. pic.twitter.com/if0I4GMHQ8

“But the symbiotes mass procreation begins to spread at such a pace that it cannot be contained. Entire cities are overrun worldwide, creating new symbiotes warlords in each. Carnage becomes the King of a NY overrun by symbiote infections…

“War is waged, the superhuman community rally together to try and combat the plague of symbiotes, but the symbiotes have spread at such a rate that heroes are being bonded to symbiotes as soon as they enter into battle. Much of the MU is overrun, Venom and small band of remaining heroes have to save the world.”

Remender’s document goes on to detail how the tendrils of the story would spread throughout the Marvel line. Spider-Man and the Avengers would have become more involved. Eddie Brock would make a sacrifice towards the end of the story, dying to stop Toxin from continuing to spawn.

The story never happened, but Remender did write Venom for 22 issues. It remains a well-regarded run that helped cement Flash’s Agent Venom persona as a fan favorite symbiote character.

Would you have liked to have seen Remender’s “War of the Symbiotes” story happen? Let us know what you think about it in the comments section.

In this latest episode we breakdown the controversy surrounding the PS5, talk about some big movie and gaming release date changes, and preview how Wrestlemania 36 is continuing despite the Coronavirus Pandemic! Listen & Subscribe!

Fortnite: How to Get Deadpool Skin, Backpack, and Unmasked Version