Disintegration is the kind of game that defies expectations and labels.

Like PUBG for battle royales or Dota Auto Chess for auto battlers, this feels like be the beginning of a totally new genre. Disintegration might create the next new video game craze out there — we just don’t know what to call it yet. According to Marcus Lehto, President and Creative Director of V1 Interactive, that was always the intent.

“Our goal is to carve out a nice new little niche for gamers,” Lehto tells Inverse.

Most video games feel like something that came before. Your Call of Duty skills transfers into Apex Legends because the gunplay is similar enough. Just about every third-person action game with melee weapon combat gets labeled a “Soulslike” because it resembles Dark Souls. But there’s nothing we can think of that will prepare you for Disintegration.

A strange collision of real-time strategy and first-person shooters with just a dash of pilot sims and some MOBA seasoning, Disintegration can feel overwhelming. And the game doesn’t exactly ease you in. Right from the start, you’ll step into a Gravcycle (motorcycle hovercraft) and start issuing commands to your crew while also flying around, shooting enemies, and using your own unique abilities

But after a disorienting few minutes of gameplay with too much going on for anyone to manage, I hit a groove and everything clicked into place. It’s not really an “aha!” moment so much as it is a “woah!” moment as it becomes clear exactly how different Disintegration is from everything else in the video game landscape.

This was the impression I came away with in October 2019 after a multiplayer demo for Disintegration led me to assume that, conceptually, it was like Mad Max meets Destiny; colorful gangs of robots roam the ruins of Earth atop sci-fi vehicles in lush but dilapidated environments long after the apocalypse.

But after getting a sneak peek at the game’s story in late March through a livestream hosted by developer V1 Interactive, Disintegration continues to surprise and impress with a thoughtful narrative about transhumanist ideas in an increasingly dark future. For a world with lots of robots, Disintegration feels distinctly human as a ragtag group of misfits come together to stop a totalitarian regime. Think Guardians of the Galaxy if everybody were a robot.

Disintegration is set 150 years into the future after global warming, food scarcity, and a pandemic have pushed humans to the brink of extinction. Even if it sounds oddly prescient given the current pandemic around the world, a worldwide pandemic serves as a mere set dressing here that we never actually see.

“Pandemic is a very small back-section of our situation,” Lehto says. “It’s a fiction I started writing six years ago. That being said, it’s a work of fiction and not meant to be any kind of real-world reflection of our current times.” As is the case in many compelling sci-fi stories before, the end of the world forces mankind to innovate.

Through a process called “integration,” the human brain is encased in a robotic armature, allowing anyone to live as a robot of pretty much any size or shape for up to 200 years before neural degradation kicks in. The story picks up several decades after the technology goes mainstream when an evil Integrated collective known as the Rayonne starts a civil war to convert or kill any and all “Naturals.” 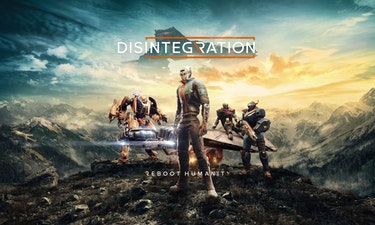 Romer is our unlikey hero.V1 Interactive

Robots just want to feel again — The protagonist in all this is an Integrated called Romer, an early adopter of the process who, like most of the “original Integrated,” clings to whatever’s left of his humanity to this day.

When he was still human, Romer was a celebrity with a TV show called Cradled Grav. A badass pilot who spent his time testing and reviewing Gravcycles “back when it was a craft hobby widely used by the public,” he underwent Integration to boost his ratings. (Yes, our hero is both a live-streamer and early-adopter of new tech.)

After the civil war against the Rayonne broke out, Romer resorted to playing both sides like a Han Solo-type smuggler, stealing and selling gravcycles to the highest bidder until he was caught and imprisoned by the Rayonne — specifically, the principal villain Black Shuck who lords over what’s left of North America.

“I wanted to make a primary character with a lot more depth than a typical empty vessel, someone who actually had a backstory we could dig into,” Lehto says. “His history with Black Shuck, Romer is not proud of that. His journey is one of redemption.”

At the start of the game, Romer breaks out of jail with a group of other Integrateds to join the Resistance and fight against Black Shuck and the Rayonne. The unlikely crew joins together to save humanity by preventing them all from being converted into soulless robots. Caught in between worlds, Romer just wants to feel human again.

“They may look robotic on the outside but they’re very human on the inside,” Lehto says of the crew. “They hold onto the affectations that made them human in the first place.” 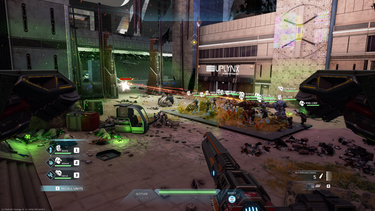 Here’s a look at Romer’s perspective during most campaign missions.V1 Interactive

How a drone became a gravcycle — Like Halo long before it, Disintegration started out as a real-time strategy game in which you hand-select units and watch them play out simulated battles in front of you with the player controlling a simple drone.

Eventually, that drone became weaponized. Then it became a floating motorcycle equipped with its own weapons and abilities, but Disintegration still kept its RTS elements. So you’ll play an active role like in a first-person shooter, but you can also call upon members of your crew to execute combo moves like in Mass Effect.

“We were worried about being lost in a sea of other games,” Lehto says. “What are we going to do to make it unique?”

Flying above the battle and actively participating when it feels necessary, you can issue commands to your troops on the fly or tell them to move towards a location. “You fire a command pulse and they’ll move there and take autonomous cover and attack,” Lehto says, noting that a significant chunk of development focused on creating the A.I. that allows your units to follow these commands.

For a team of around 30 developers working at an indie studio, it’s no easy feat to deliver what’s essentially a AAA title, but Lehto is confident Disintegration will be released by the end of 2020. With ambitious long-term plans for the new franchise, we just might have the next big sci-fi gaming universe on our hands.

Disintegration will be released in 2020 for PlayStation 4, Xbox One, Microsoft Windows.