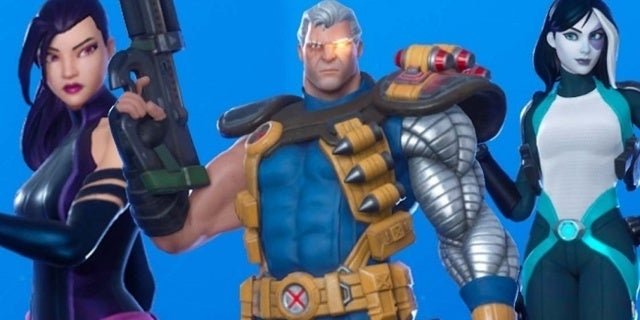 Epic Games and Fortnite have teamed up with Marvel to unveil some special edition skins for X-fans. The popular X-Force characters of Cable, Psylocke, and Domino have been made available for purchase in the Fortnite store, currently on sale for less V-Bucks than usual when bought as a bundle. This is the latest Marvel addition to Fortnite, following the Battle Pass for the current season offering the opportunity to unlock a Deadpool skin. Previously, Fortnite had a mode celebrating Thanos and his involvement in Avengers: Infinity War and Avengers: Endgame and skins such as Black Widow have also been available in the past.

On Friday’s ComicBook Plays stream, Brandon Davis unlocked the Cable, Psylocke, and Domino skins in Fortnite to take a close-up look at them in the game. Each of the skins comes with their own backpack to complete the character’s look, like Cable’s cape and Psylocke’S Shurayuki blade.

In the video below, the costumes get an up-close look as they appear in Fortnite.

A full look at the X-Force costumes you can get in #Fortnite now! pic.twitter.com/6MjkA5BVmd

Playing with the skins didn’t bring much luck to the ComicBook Plays stream on Friday, though.

While Cable and Psylocke were used early on, getting back in thee swing of things (remembering how to play) was done in time for Domino’s efforts. In the video below, Domino is seen in action, taking out one of three remaining players late in a game but ultimately perishing in the storm to finish in second place. Heeartbreaking. Domino could’ve used a bit of that Deadpool 2 luck.

ComicBook Plays is the latest exciting product from ComicBook.com. Recently, the launch of the live Quarantine Watch Party has gained great popularity as filmmakers and popular actors join live Watch Party events on social media, sharing behind the scenes details, images, and videos from the production of their respective films. On weekday mornings at 11:30am ET, ComicBook.com’s Daily Distraction with Chris Killian publishes on Instagram and Twitter. Each Saturday, ComicBook.com’s Second Printing recaps the week’s biggest issues with a singular focus on Instagram and YouTube video.

READ  Popping Off with the Crossbow in Fortnite! (w/ @SypherPK)

ComicBook.com’s social channels continue to grow with original content and engagement. The official Instagram account will top 1 million followers, along with a YouTube channel reaching more than 1.1 million subscribers and a Facebook reach closing in on 20 million across all pages. For the content to continue improving, please be sure to leave your comments and suggestions so that each show can cater to the desires of all of ComicBook Nation!

New episodes of ComicBook Plays air weekdays at 1:30pm ET and be followed up each week day at the same time!