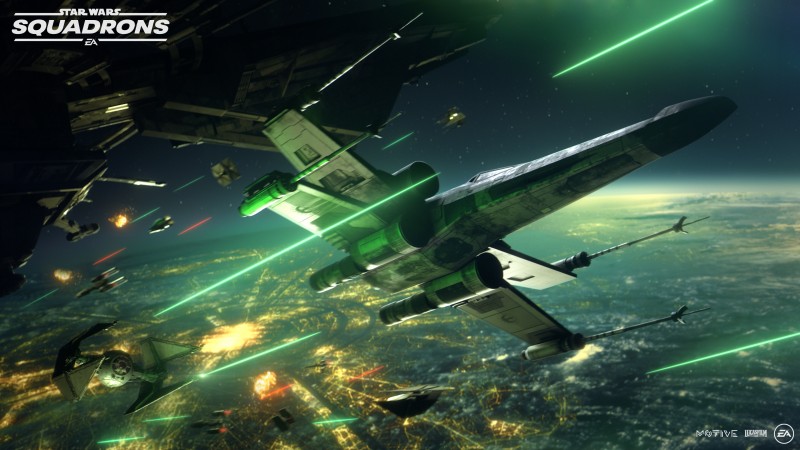 Star Wars fans have long wanted another X-Wing game, and developer Motive Studios may be answering that call with Star Wars: Squadrons, a new dogfighting game that puts you in the cockpit of an X-Wing or TIE Fighter. Star Wars: Squadrons will release on October 2 for PlayStation 4, Xbox One, and PC (via Steam, Epic Games Store, and Origin) with cross-platform support. The PlayStation 4 and PC versions can also be played in VR.

Set after the Battle of Endor, Star Wars: Squadrons features both a multiplayer component and a single-player campaign. For the campaign, Motive is creating a new story that unfolds from the perspective of what the studio calls “two  customizable pilots,” one for the Republic’s Vanguard Squadron and another for the Empire’s Titan Squadron. The wingmates at your side are original characters. We don’t know who they are yet, but it appears you can get your first look at them in the screenshots below. Motive is also teasing cameos from known characters.

The multiplayer component focuses on 5v5 dogfighting. We assume you’ll be able to select whichever “Wing” or “TIE” you want before taking to the skies. Motive has provided the framework for one of the multiplayer modes called Fleet Battles. Players begin a briefing room where skirmishes are planned and then take off to battle a rival team with the ultimate goal of destroying their flagship. These battles unfold from the first-person perspective, and also feature objectives. Some of the locations are new to Star Wars, including Galitan’s shattered moon and Yavin Prime’s gas giant. Playing multiplayer will reward you with experience points that eventually lead to ranks being earned, which in turn give you new weapons, engines, shields, and hulls. Customizable options are handed out to change the look of your pilot, ship exterior, and cockpit interior.

READ  Feature: Unity Prices Its IPO at $52, Above the Expected Range. Now We Wait for the Opening Trade.

I cannot wait to get my hands on Star Wars: Squadrons. As much as I enjoyed Star Wars Jedi: Fallen Order, we don’t always need to be running around with a lightsaber. The space battles in Star Wars are equally as exciting. The X-Wing and Rogue Squadron games of old show us they can be just as much fun in video games.