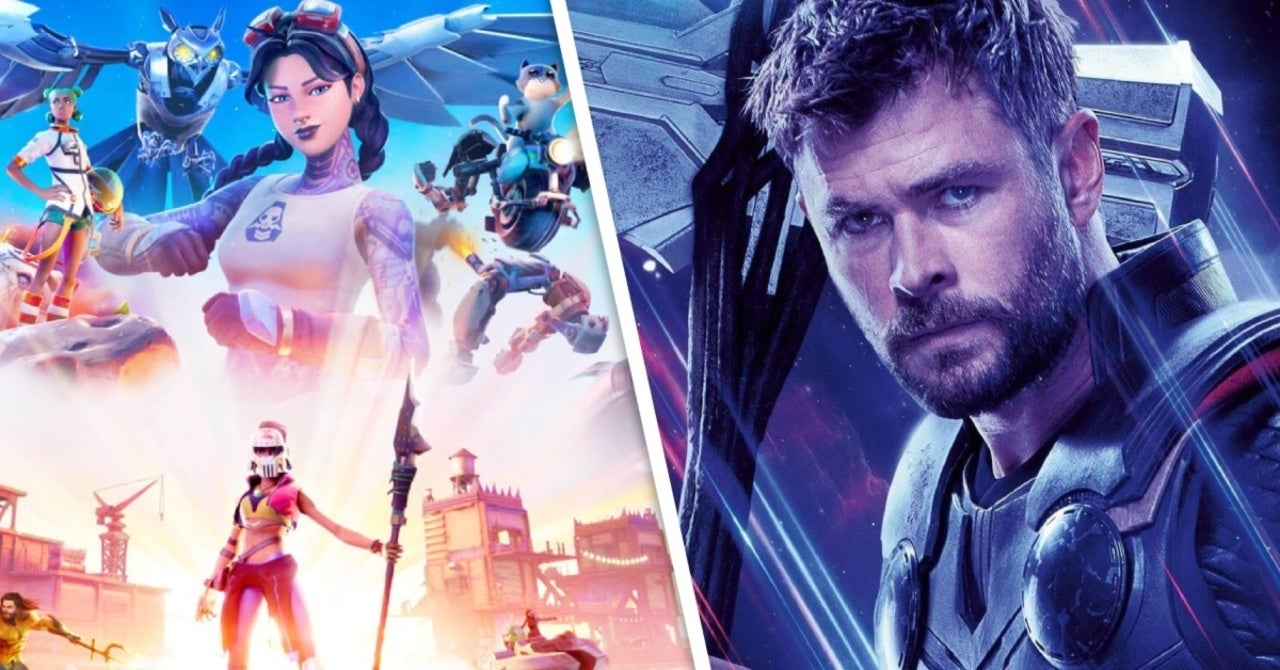 Fortnite‘s Chapter 2, Season 3 is in full swing, and it’s already been providing fans of the popular game with some major updates. In addition to plunging nearly all of the game’s map underwater, the game has unveiled a slew of new cosmetic items, including new skins for fans to purchase. Given the nautical theme of the season, some of these skins and new characters have gone into an interesting direction — and it looks like a new leaked skin is no exception. A new tweet from @Lucas7yoshi reveals several of the leaked skins and back blings that will seemingly be making their way into Season 3. Among these is “Dad Bod Jonesy”, a take on the blonde-haired character that some are already comparing to Avengers: Endgame‘s “Bro Thor” (Chris Hemsworth).

When you look at the two side-by-side, there definitely are some similarities, from the long hair, beard, and sunglasses to the nearby snack food. Dad Bod Jonesy is also sporting a beige cardigan that looks a lot like Jeff Bridge’s character in The Big Lebowski, a character that served as a bit of inspiration for “Bro Thor”.

“We knew we wanted him to kind of get a little schlubby and be hanging around the house,” Endgame co-writer Christopher Markus explained in an interview last year. “And Lebowski is sort of the world’s primary reference for a guy in a bathrobe. So we gave our ideas about it to the costume and art department and they came back with Thor in a bathrobe with sunglasses and suddenly it all clicked.”

“Playing that version of Thor was a real joy because on Ragnarok we did something so drastically different,” Hemsworth explained in an interview last October. “Then, Infinity War, I came in thinking I was going to do Ragnarok, and Anthony and Joe Russo said, ‘No, we’ve got something different again.’ Then I got to Endgame and thought, ‘Man, what do we do now?’ We have to keep making these big changes and they had that idea for that character.”

“We just kind of ran with it, and it evolved,” Hemsworth added. “There was a lot of improvisation. But, there were no rules with what we could do there. Again, when you kind of remove the box the character is in, it keeps you surprised as the actor. For the audience, I think what was fun was, I didn’t know what the hell was going on, and I think most people were along for that journey.”

What do you think of “Dad Bod Jonesy”? Do you think he looks similar to “Bro Thor”? Share your thoughts with us in the comments below!

Trackmania is out now