Home » FBNR Guides » Ubisoft’s new battle royale game is for the looters, not the shooters
FBNR GuidesFortniteLatest News From Fortnite

Ubisoft’s new battle royale game is for the looters, not the shooters

On Thursday, Ubisoft Montreal revealed Hyper Scape, a new battle royale game set in a cyber future. The game’s heroes enter the future equivalent of the internet to battle it out for glory — basically, the Oasis from Ready Player One, if that helps you.

At a preview event on June 26, I played a few hours of Hyper Scape, and learned that this battle royale is more about looting than shooting.

What is Hyper Scape

Hyper Scape is a battle royale game for up to 99 players, played in either three-player squads or alone via solo queue. When the match starts, players fall to the ground in their customizable landing pods. The other players at the preview event and I never seemed to have trouble reaching even the farthest areas of the map during our descent.

Hyper Scape only has four gear slots: two weapons and two “Hacks.” Hacks are abilities, which can do all sorts of things, from healing you and your squad to turning you into a giant ball that can bounce around an area. There are no health packs or armor kits, no grenades or vehicles.

If a player picks up a copy of something they already have, their gun or Hack will get an upgrade. This is called “fusing,” and the gun upgrades that result from it can be devastating and game-changing. For example, the sniper rifle starts out as a two-headshot kill weapon, but when it’s fully upgraded, the sniper can kill an enemy in a single headshot. Hacks fuse to reduce cooldown, allowing players to use them more frequently. 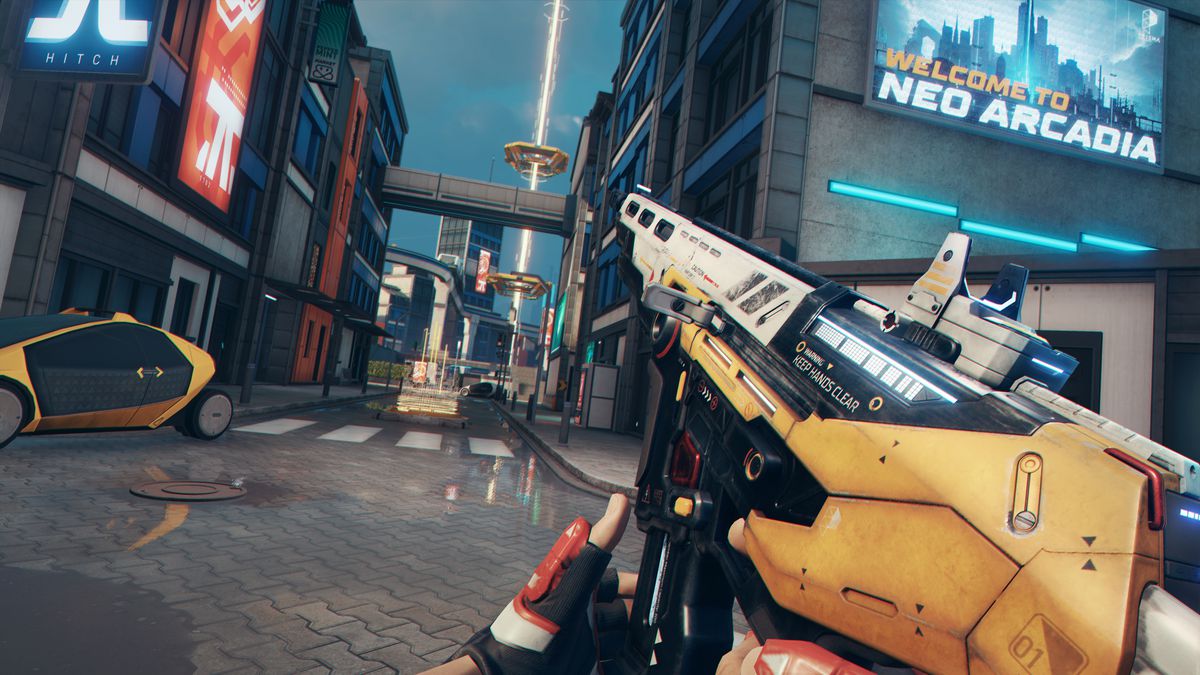 Death in Hyper Scape is also a bit more forgiving than the typical battle royale game. When you die, you become a ghost who can then wander the world, scouting out enemies — so you never have to put down your mouse or controller. When enemies die, they become a ghost just like you, but they also drop a respawn pad. Allies cannot drop these pads, but all enemies do. If a living squad mate and a ghost ally meet at any respawn point, the living player can bring their ally back to life, albeit without all their loot. Because of how many enemies die every match, a respawn point is never too far away.

When describing this revival mechanic, Hyper Scape creative director Jean-Christophe Guyot said, “We’re still tweaking the formula a lot … One thing we wanted was to make sure there was never a pause in the game.”

Like other battle royale games, the goal is to remain the last team or player standing, while the map gets smaller and smaller. In this game, different districts of the city start to phase out of existence — in this case, that’s referred to as the “decay” — which restricts the area of play down to a single block in the city. But in Hyper Scape, players can also pick up the Crown. Holding onto the Crown for 45 seconds wins the game, but you have a massive target on your back while you do it.

In each game, the NPC host of the Hyper Scape arena will also deploy different kinds of in-game events. Some events cause more loot to spawn, while another reveals all enemies on the map, and yet another one all but turns off the game’s gravity. All of these familiar parts of battle royale gameplay get a mix-up thanks to Ubisoft Montreal’s Twitch partnership. If someone in your game is streaming, audience members can vote on which event will take place. If their favorite streamer is in a high-octane chase around the city, perhaps the chat will vote for low gravity, or something more detrimental, like the reveal event.

Hyper Scape is a free game, but it will sell cosmetics like Fortnite does, and players can opt into the game’s Battle Pass. But with so many free, first-person, fast-paced battle royale games out there, what makes Hyper Scape different? 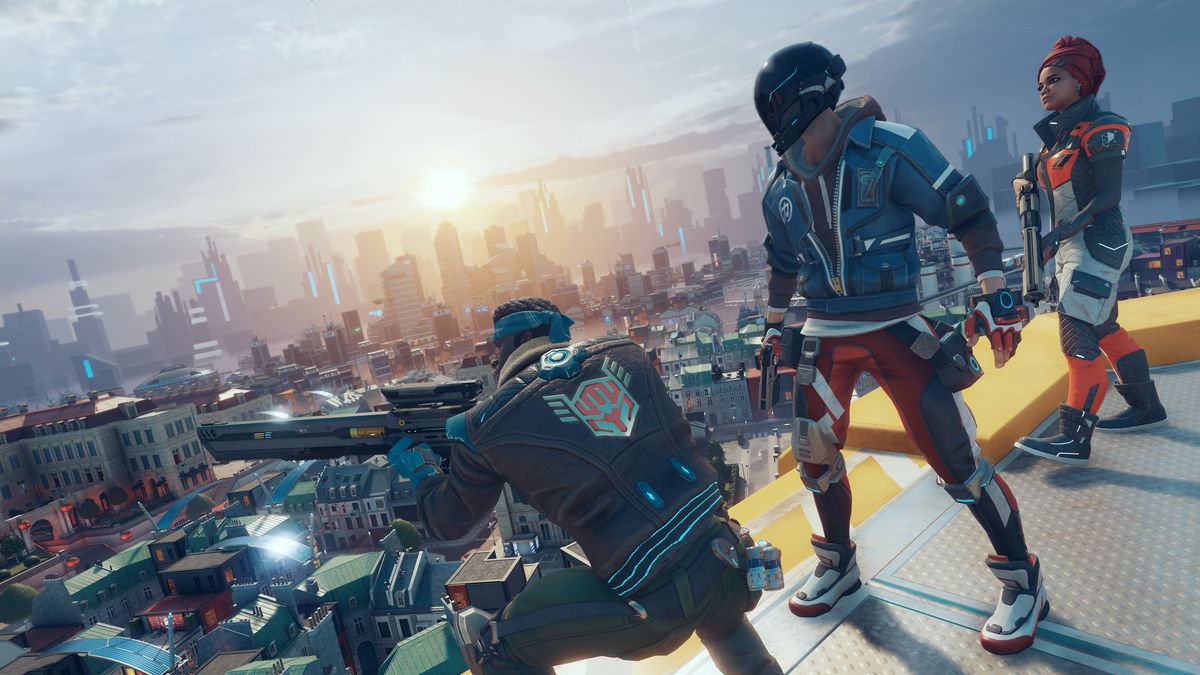 A squad scouts ahead on a rooftop Image: Ubisoft Montreal

If you’re familiar with battle royale games, Hyper Scape will immediately remind you of Apex Legends. The speed, the animations, the sliding. I move fast in Hyper Scape, and the urban environment means I’m climbing up flights of stairs, shooting out of windows, or using jump pads to reach the roof.

My most successful fights took place at long range, with a sniper rifle in one hand and healing Hack in the other. These fights were slow, with two teams taking occasional shots at each other from two different buildings. If I hit someone, they would duck behind a chimney and start to heal, so I’d need to reposition for my next shot.

READ  The Motorola Edge is a more accessible flagship phone

Fights on the ground were hectic and a bit harder to track, although I also wasn’t familiar with the map yet. The explosive nature of many of the game’s weapons meant a quick end to one-on-one battles. But weaving between buildings and windows, chasing someone down or running away, felt smooth and polished. It’s got the mobility of Apex Legends, except I had to pick my character’s powers off the ground instead of spawning with them.

At first, the healing Hack felt almost mandatory, but as I got into more scrapes, I found powers like the armored ball or wall to be most helpful. If I needed to get away from a group of enemies, I could hop in the ball and bounce away, living to resurrect my teammates and fight another day. Or I could use the wall Hack to protect my allies while I resurrected them, or block off a doorway, trapping an enemy inside with me.

Still, the current tools in Hyper Scape felt a little limited. There was one weapon or power best suited for each situation, as opposed to multiple tools providing multiple ways to get out of different scrapes. If I was close to an opponent, I would wish I had the shotgun; if I was far, the sniper. I could paint a similar situation for each of the game’s powers and weapons, which left me disappointed with the limitations of the items I’d picked up in a given run, rather than eager to test a weapon’s versatility. 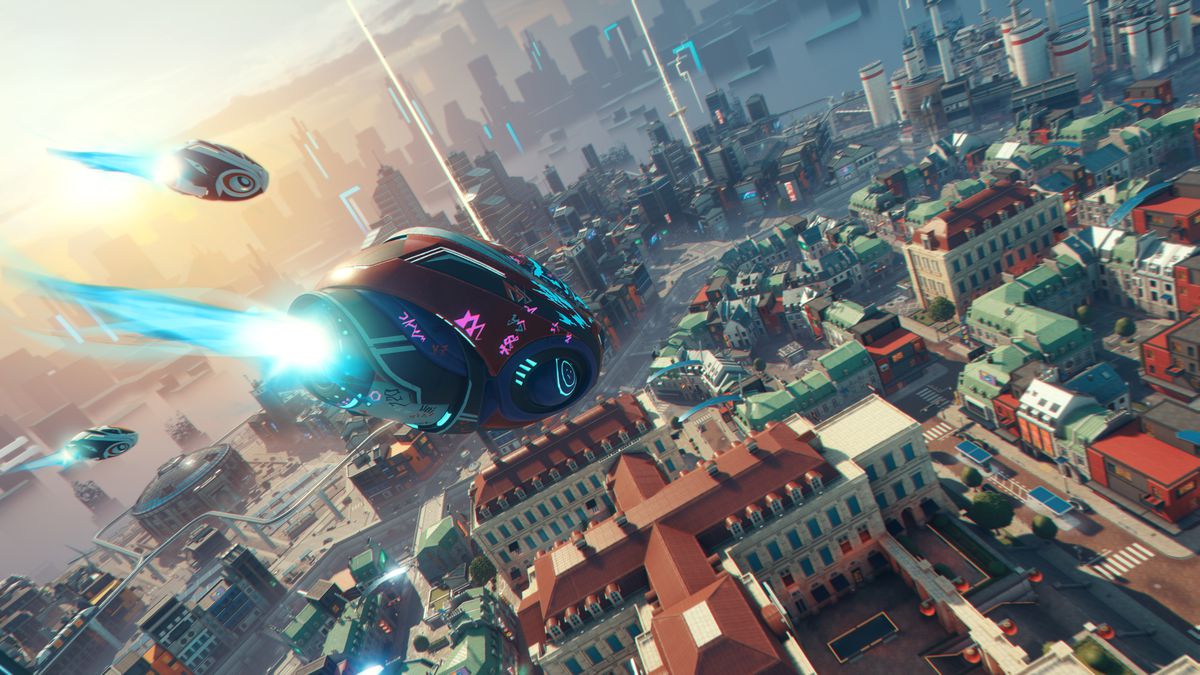 If I’ve learned anything about battle royale games over the years, it’s that aggressive play is the key to victory. Hiding in a bathtub or slowly looting a warehouse can only get you so far. If you hope to make it to the end, you need the best weapons and a sea of consumables to stand a chance. And the best way to collect those items? Eliminating the competition and stealing their shit.

In my couple of hours with Hyper Scape, I found it to be a far more passive experience. After trying to fight teams over and over, I kept asking myself what I was gaining from those encounters. Shooting experience and map knowledge, sure, but loot? No more than I would find in a nearby building.

My best matches came from looting a large, empty location with my squad. Because you can only hold four items, it was relatively easy to find exactly what I wanted anywhere on the map. I would regularly find two or three versions of my weapon — yielding some nice fusion fodder — before ever entering combat. In rare cases, my teammates and I would find a completely upgraded weapon by breaking a box — no murder required.

There are no consumable items to loot; player health will regenerate on its own as long as you’re not taking damage for a certain period of time. Combined with the ease of bringing someone back to life, Hyper Scape felt very lenient compared to other battle royale games. Get into a scrape you can’t win? As long as someone on your team runs away, your team can survive, because that person can revive all of you. Losing a battle just means more time looting in the shadows, which is more lucrative than fighting enemies anyway.

The “spectacle” aspect of the game was a huge selling point for Ubisoft, and given the Twitch support in-game, it’s clear that the designers want this game to appeal to spectators as much as players. But watching people look for weapons in a big building isn’t exactly riveting. Of course, Ubisoft is still working on Hyper Scape, and the designers’ focus on spectacle likely means they’ll try to find ways to incentivize players to play aggressively.

In my limited time with the game, that action-packed incentive isn’t there yet. Hyper Scape’s fluid, fast-paced feel is better for running away from a fight than running toward one. But a lot can change about a battle royale game after a beta, and even after a release, and Hyper Scape plays well at the very least — the hardest thing to fix post-launch.

Hyper Scape’s Technical Test launches July 3, and players can sign up for a spot on the game’s website. Ubisoft will likely do a beta down the road, but it’s unclear when it will launch. The Technical Test is only for PC players, but Hyper Scape will eventually come to PlayStation 4 and Xbox One. Guyot also hinted that Hyper Scape will eventually come to next generation consoles, although it’s unclear if it will be available when those consoles launch later this year.

Ubisoft’s Hyper Scape is a fast, chaotic battle royale from the developer of The Division

YOU LOVE IT OR YOU HATE IT! - FORTNITE W/ SYPHERPK & COURAGEJD