After last week’s largely downbeat episode, “Space Patrol” feels both unexpected and inevitable for a show like Doom Patrol. This is another transitional episode with no single big plot or “bad guy” for the heroes to fight. Instead, it’s a series of vignettes as it follows the characters in their different subplots. It’s actually a lot less depressing than last week as it sets up for bigger things to hit the fan later on. 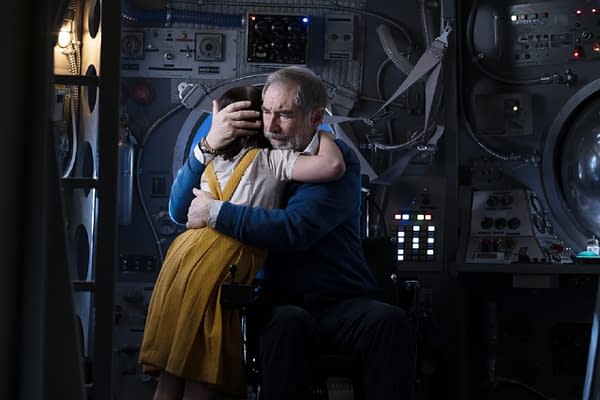 Everybody is Still Miserable

Jane (Diane Guerrero) is in a coma and covered in candle wax after her alternate personality Baby Doll’s run-in with the Candlemaker. In Jane’s mindscape, the alters are holding a funeral for the two that the Candlemaker killed and Jane is still trying to hold onto her position as the primary. Dorothy (Abigail Shapiro) feels guilty for what she did to Jane and runs away – to space. In a spaceship. The Chief (Timothy Dalton) grabs a reluctant Cliff (Brendan Fraser‘s voice, Riley Shanahan‘s body) to chase after her in a spare spaceship that happened to be sitting in the garage, because The Chief. Larry (Matt Bomer‘s voice, Matthew Zuk‘s body) ends up entertaining some guests while everyone else is gone – a trio of astronauts from the 1950s that The Chief had sent into space on an exploratory research mission, including a cosmonaut named Valentina Vostok who has a negative being like Larry’s inside her, but she’s made peace with it. Meanwhile, Rita (April Bowlby) decides to have a self-care day by joining the cast of a local community theatre production of “Our Town”. Vic (Jovian Wade) is off with his new girlfriend Roni and tries to help her figure out the origins of the implants in her body that’s poisoning her.

READ  How to get the golden version of the Off-site Student? 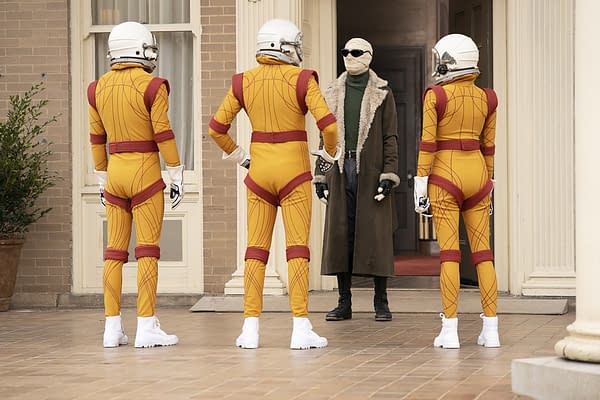 Yet again, the show reveals its real agenda. It’s not about superheroes fighting to save the world but a group of people trying to move forward with their lives after some horrific trauma. It’s a cruel comedy about taking small steps forward but big steps backward. It’s even crueler to the characters than Grant Morrison ever had the stomach to be in his run on the comics that the writers are obviously taking their cues from. The characters do much more awful things to each other than they ever did in the comics.

Everyone gets disappointed. In the funniest beat, Rita discovers to her chagrin that “Our Town” is not Thornton Wilder‘s play but a new play about the rift that opened and trashed the town back at the start of season one. And to add insult to injury, the co-star she befriends is actually unknowingly playing the “ugly blob lady” and has her psychoanalyzed to a ‘T’. Vic discovers that The Chief had worked with S.T.A.R. Labs to create the implants whose metal is currently poisoning Roni. Larry discovers that Valentina and the astronauts were sent by The Chief to explore the same anomaly that would later cause his accident and ruin his life with the negative being invading his body. Jane not only loses her role as primary but has to face her own failure.

Cliff talks a distraught Dorothy into returning with him to The Chief, only to be betrayed by him once again. That’s right. The Chief, Niles Caulder, despite all his talk about making amends and honesty, just can’t help but be a bastard when push comes to shove. The Chief is the worst. He’s possibly the most duplicitous guy on TV, and with a lot of other contenders in cable TV, manages to be an even bigger bastard than anyone you can think of. Everything is The Chief’s fault again. It’s about people trying to be better but always ending up doing what they always did, and The Chief is the best-worst example of all. Oh, Doom Patrol, don’t ever change. But then it seems to say that people can’t really change.

READ  A witch or a master of arcane arts? No one knows which is which.Check out Hemlock in the Item Shop now! https://t.co/SazGvC5eAs