Phoenix Labs released a brand new update into Dauntless this week as players can now experience the content from Clear Skies. The free update dropped on all three consoles and in the Epic Games Store, giving players access to a fully reworked sword kit, new combos, a special attack gauge, upgrades to Umbral Escalation, the “Clear Skies” Hunt Pass, and more. Probably one of the cooler things added was a redesign of Ramsgate, which you can check out here, giving the town a little bit more color and life. We have more info on the update from the devs below along with a trailer showing the area off more. 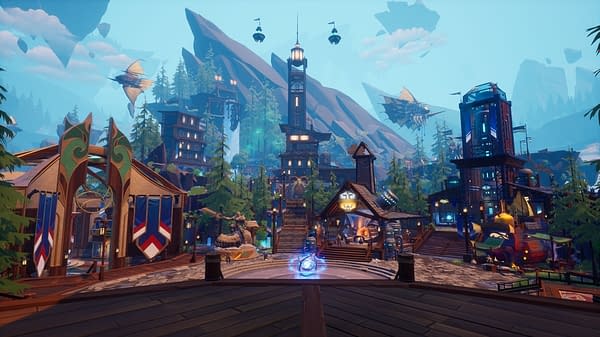 A look at the Ramsgate redesign in Dauntless, courtesy of Phoenix Labs.

The Ramsgate redesign showcases a completely new layout for the hub city, and features numerous points of interest and new structures housing Ramsgate’s denizens. The city now offers unique soundscapes for a variety of areas and NPCs, creating a more immersive Ramsgate experience. Players can also populate their journals by interacting with characters and objects to unlock lore about the Shattered Isles and its inhabitants. The city also now includes a racing mini-game, so players can challenge their friends to a footrace across the city.

The Sword has received a full design overhaul, and players can experience the new kit starting today. In addition to new combos, the sword now utilizes a Valour system built around 3 main components: core combos (which generate Valour), Valour combos (which cost Valour), and special meter (which lets players execute the currently-equipped special move). Valour combos open up a number of new combat actions for the sword, including an “area of effect” attack, as well as mid- and long-ranged attacks. The Clear Skies Hunt Pass launches as part of the update today, allowing Slayers to earn up to 50 levels of rewards, including cosmetics, bounty tokens, consumables, and more, themed around the celebration of new adventures following the rebuilding of Ramsgate. For the first time, Slayers can earn an exotic weapon–The Hunger sword–through the Hunt Pass.

READ  Complete Challenges in this life... or the next.Complete the free #Fortnitemares Challenges to unlock the Midas&#039; Shadow Wrap, Smash O&#039;-Lantern Pickaxe, Bobo Back Bling and more!Read more: https://t.co/UvPTCmeKZ9 https://t.co/xO1FQV8yht

THERE WAS NO WAY THEY'D WIN AFTER THIS!! FORTNITE NINJA THROWBACK!

Samurai Shodown Is Getting Gongsun Li as a Free DLC Character