Empyre #3 Review: Can This Issue Yet Save Marvel&#039;s Worst Event Ever?

Can this issue and its focus on Black Panther fighting to save the world… in turn save Marvel’s worst event ever?

Empyre may be Marvel’s worst event of all time. The events of the series hinge on Tony Stark making a mistake that he, or anyone with functioning ears and eyes in the situation he was in, would never make. What followed was a plant-based attack on the planet earth by the alien race the Cotati. As the Avengers and X-Men fight on the ground, and Hulkling, the Kree/Skrull Alliance, and Captain Marvel try to cook up a Deux Ex Machine while delivering purely expository dialogue in a spaceship overlooking the Earth. It’s all equals out to uniquely horrible storyline from a company that, despite all the talk about event fatigue among the readers, normally gets these kinds of stories right. The latest issue, Empyre #3, is the best yet, though… but is it enough to save this event? 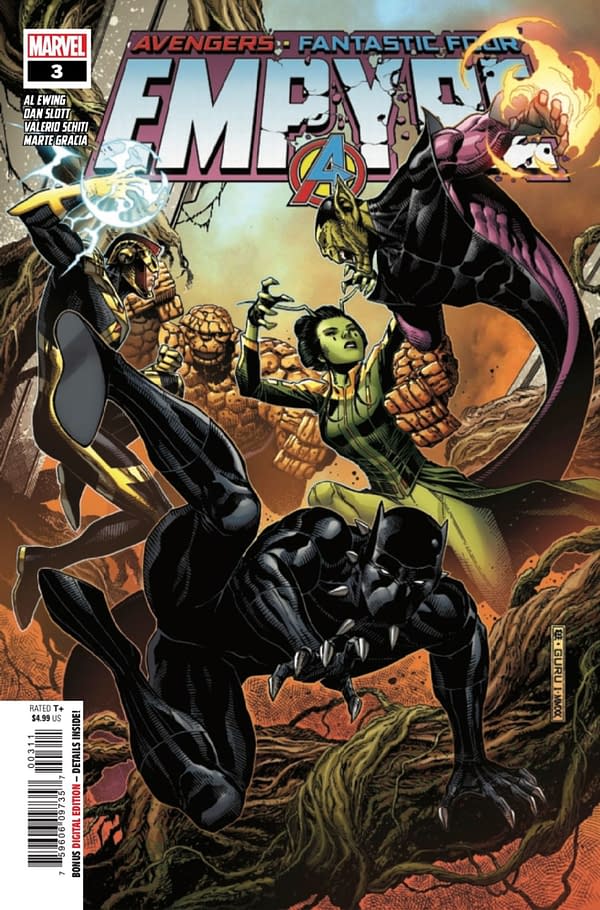 Al Ewing writes from a plot by himself and Dan Slott, and all of the problems with Ewing’s writing that make the first two issues almost unbearable are here in force. The characters sound nothing like themselves, as every line of dialogue is either plot-driven or an over-dramatic clunker, with Tony saying “blasted!” like a Saturday Morning Cartoon villain from the 90s, and Hulkling saying “damn you” as if he’s a forty-year-old man written by sixty-year-old writers in a soap opera, instead of a Young Avenger. It feels bizarrely out of touch, without a single line that feels like an insightful or powerful or interesting reflection of character. Still, it’s the best Empyre issue so far because of one idea: the Cotati’s plot to seed Wakanda’s Vibranium-enriched soil to create an unstoppable, God-like being. Black Panther, in all of his regality, actually benefits from the stilted writing that doesn’t work on other characters, and the focus on him in this issue is a breath of fresh air. It’s not enough, though, to balance out the drama in the stars above. Hulkling’s situation and choices should be interesting, but it all completely lacks emotional weight. There’s a huge twist in the issue, which sounds like it would be interesting on paper, but the writing feels unlike storytelling, but rather like plot points are being checked off one by one.

The same is true of Empyre #3 that was true of #1 and #2. Valerio Schiti, Marte Gracia, and VC’s Joe Caramagna do the lion’s share of work in making this book look and feel like a Marvel event book. It’s not enough to save the story, but this team makes it visually beautiful throughout.

Empyre will likely remain Marvel’s worst event, even though some of its tie-ins are great reads. Short of a finale that sets aside the boring plot and comes with a renewed focus on characters, it may be a total miss.

PUBG Madison studio director Dave Curd: “The Loot Truck is just the tip of the spear”