If you ever watched The Floor is Lava or Wipeout and thought, “I could do that,” Fall Guys: Ultimate Knockout lets you prove your prowess.

The goal in Fall Guys is to be the last jellybean-dude standing. There are five courses you’ll have to get through to wear the crown, with each course shaving off more of the game’s 60 initial participants. Some matches will have you chasing around other players to grab a golden wolf tail they’re wearing, and only the players with tails will move on to the next round.

Other levels are straightforward obstacle courses, where you have to finish within the first 30 or so players in order to move on. Imagine a battle royale game mixed with a surreal version of a family-friendly company picnic.

While it might take a couple games to get a feel for how high and far your character can jump, as well as figure out the overly-sensitive camera controls, Fall Guys is simple enough. You can jump, grab, and dive, giving you a handful of strategies to try out on the various levels.

Unlike traditional first-person shooter battle royale games, there aren’t many skills you can perfect to give you an unbeatable edge. You don’t have to know how to build a fortress in a snap or know which guns are the best for short-range duels. You just have to survive, and that’s what makes Fall Guys so good. The accessibility means that just about anyone can jump in and have a good time.

Besides, it’s all so doofy, and that tone is what keeps me playing instead of rage-quitting as I lose over and over, trying to come to terms with my strategy. The playful colors and silly sound effects serve as a permanent ice pack on my steaming head, keeping me from exploding.

READ  The Wall Street Journal: Tech companies including Spotify and the maker of ‘Fortnite’ seek to reform app stores

It’s hard to stay mad at such a lighthearted game, as the characters coo and sputter gibberish as they bounce around the stages. If I don’t make it in this round, no problem, I’ll just quit and queue up again. If any of my friends that I queued in with are still alive, I’ll stick around and watch them (try to) win. The stakes always seem low, and so many of the game’s design elements gently seem to remind everyone that this is all in good fun, so play nice. 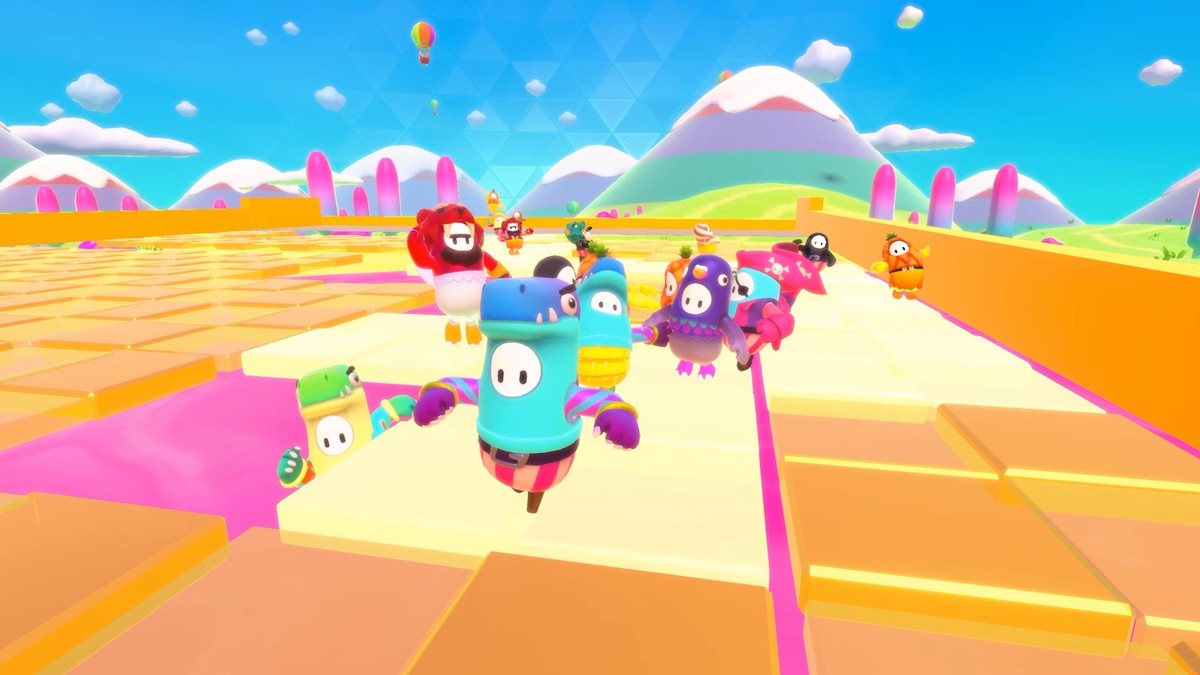 Players can still be jerks in Fall Guys, though. Sometimes opposing players will latch onto me at the beginning of the round, setting us both behind. Other times there are evil players who wait near the finish line and latch on to me there, sacrificing themselves just to prevent me from finishing.

Why? I don’t know. I guess this is fun for some people. All games have their fair share of bizarre griefers who want to ruin another player’s day. While this leaves a sour taste in my mouth when it happens in the rounds closer to the end, robbing me of any hope of winning, these toxic players don’t haunt me at night in the same way that say, a person ruining my 35-minute League of Legends match would.

Ultimately, the people who wrangle my character just to make me lose are just playing the game in their own weird way, which is another thing that makes Fall Guys so great. My friends and I have realized we all have very different ideas about how to best handle each situation, and they all work at different times.

In some of the wolf tail levels, my friends prefer to leap around, continuously moving around the stage to avoid getting their tail yanked from an opponent. I prefer to hide out in a corner, away from the madness, only moving when somebody notices that I’m far too calm. The beauty of battle royale games in general is that that no match will be the same as another, and Fall Guys does a good job at mixing things up.

Levels like the Seesaw stage at times throw me for a complete loop. The area involves jumping on dozens of platforms to reach the end but, as the name suggests, the platforms tip from side to side like a seesaw, depending on player weight. If tons of folks are on one side of the seesaw, it’ll flip that way.

I’ll be on my merry way, close to the finish, but if too many people are alongside me, the seesaw will tip over, causing my guy to slide right off into the abyss, along with the other players suffering the same unfortunate fate. We all have to work together to move forward, but only just enough to get things moving while keeping the advantage for ourselves.

There’s also a shop, in addition to the optional, Fortnite-style battle pass, where you can exchange in-game currency for cosmetic items that rotate out every 24 hours. Crowns, which you can only get from winning, unlock Legendary-tier cosmetics.

Kudos, which you get in various amounts depending on where you place in your round, can be used to buy everything else. Only the best of the best will be decked out in full Legendary gear. There’s also a battle pass-like system, which lets you unlock some gear just for playing the game. 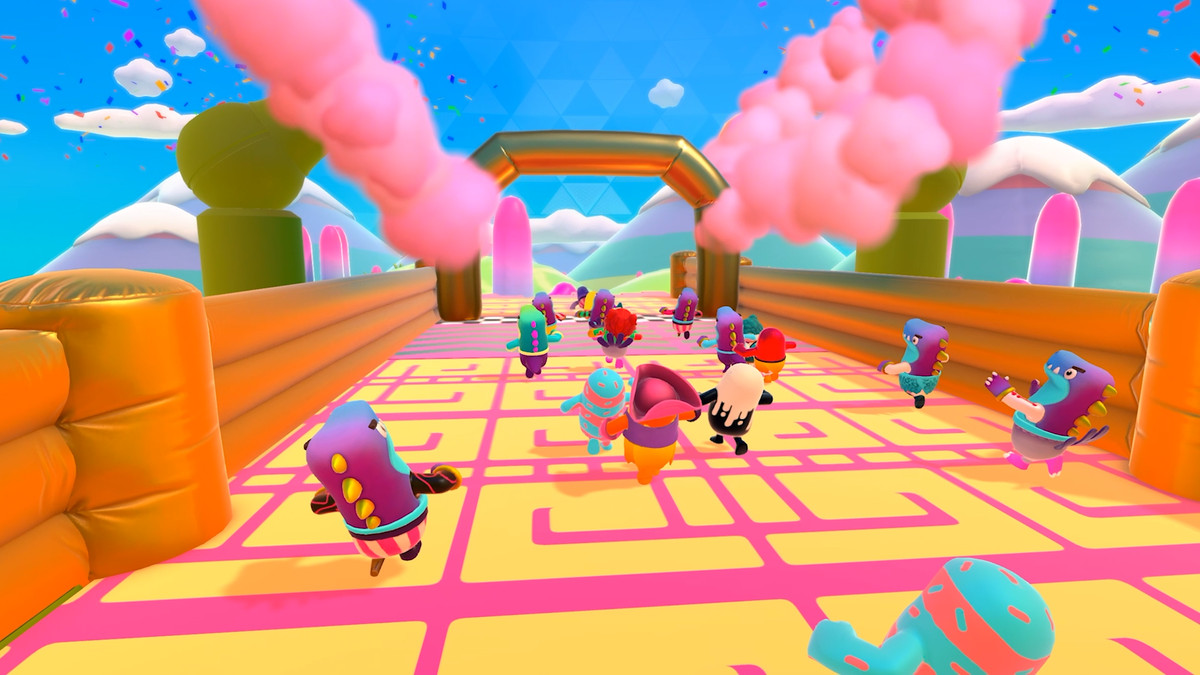 When I’m not playing Fall Guys, I’m watching other people play Fall Guys. I can’t seem to get enough of these rotund guys bouncing and flopping around. There’s something about hearing somebody confidently declare, “I’m going to win this round,” then seeing them immediately flop off the stage into a pool of pink death lava that is amusing every single time.

READ  PlayStation 5 launch games: Every PS5 title you can play on day one - CNET

With rounds only lasting 15 minutes at most — and that’s if you make it to the final round — Fall Guys is a delightful bite of fun that soothes the itch for a battle royale, without forcing you to think too hard. There is a bit of a random element to the game, especially since you never know how your competitors will react to giant falling fruit or huge hammers knocking your guys around, so the ultra competitive players who just want to win at any cost may get frustrated, but don’t let that stop you.

With new stages to be added in coming updates, Fall Guys is already cementing itself in the “favorites” section of my Steam library.

Fall Guys: Ultimate Knockout is out now on PC and PlayStation 4. The game was reviewed on the PC using a download code provided by Devolver Digital. Vox Media has affiliate partnerships. These do not influence editorial content, though Vox Media may earn commissions for products purchased via affiliate links. You can find additional information about Polygon’s ethics policy here.

YouTuber Collaboration Play Together for the First Time! Collab Ep. 1 | Fortnite Save the World