The three best-selling comic books on Amazon right now are the three volumes of The Umbrella Academy by Gerard Way and Gabriel Ba from Dark Horse Comics. Looks like a returning Netflix series really did the trick… 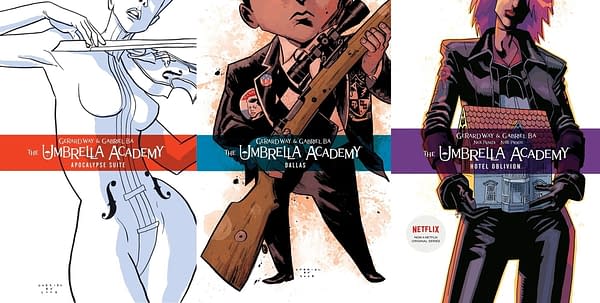 In an inexplicable worldwide event, forty-three extraordinary children were spontaneously born to women who’d previously shown no signs of pregnancy. Millionaire inventor Reginald Hargreeves adopted seven of the children; when asked why, his only explanation was, “To save the world.”

These seven children form the Umbrella Academy, a dysfunctional family of superheroes with bizarre powers. Their first adventure at the age of ten pits them against an erratic and deadly Eiffel Tower, piloted by the fearsome zombie-robot Gustave Eiffel. Nearly a decade later, the team disbands, but when Hargreeves unexpectedly dies, these disgruntled siblings reunite just in time to save the world once again.

Faced with an increasing number of lunatics with superpowers eager to fight his own wunderkind brood, Sir Reginald Hargreeves developed the ultimate solution …

Now, just a few years after Hargreeves’s death, his Umbrella Academy is scattered. Number Five is a hired gun, Kraken is stalking big game, Rumor is dealing with the wreckage of her marriage, an out-of-shape Spaceboy runs around the streets of Tokyo, Vanya continues her physical therapy after being shot in the head–and no one wants to even talk about what Séance is up to …

The award-winning and best-selling superhero series returns, stranger than ever–And their past is coming back to hunt them.

The team is despondent following the near apocalypse created by one of their own and the death of their beloved mentor Pogo. So it’s a great time for another catastrophic event to rouse the team into action. Trouble is, each member of the team is distracted by some very real problems of their own. The White Violin is bedridden due to an unfortunate blow to the head. Rumor has lost her voice – the source of her power. Spaceboy has eaten himself into a near-catatonic state, while Number Five dives into some shady dealings at the dog track and The Kraken starts looking at his littlest brother as the key to unraveling a mysterious series of massacres… all leading to a blood-drenched face-off with maniacal assassins, and a plot to kill JFK!

READ  Team up and use your super-powers to capture and defend outposts in a mighty battle for control of the Island.Play the new Marvel Takeover LTM now! https://t.co/tlFaUSqAXC