And so, DC Universe and HBO Max‘s Doom Patrol ends its second season prematurely. It was supposed to be 10 episodes instead of 9, but the pandemic caused production to be shut down before the 10th episode could finish shooting. We’re left with the abrupt cliffhanger ending of “Wax Patrol” as a cap on this season, just when things started getting really intense.

It was already intense to start with. This show is always intense. How can a show about surviving horrific emotional trauma not be, even if it’s dressed up in superhero clothing and surreal, symbolic, dark comedy? The ending of a serialized thriller series is always going to be a two-part episode with the penultimate episode serving as the dark before dawn. Things get really, really bad for everyone before a last Hail Mary or rescue arrives at the end. 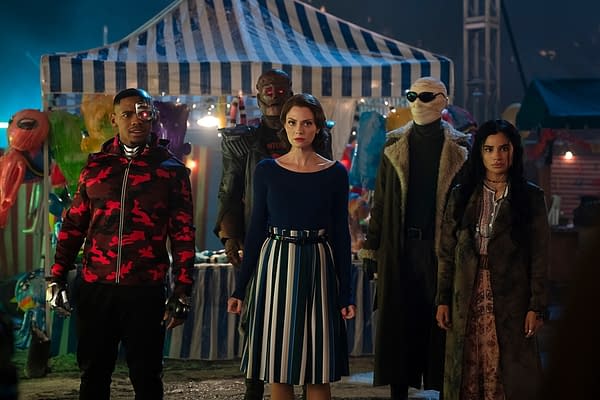 When Your Imaginary Friends Become Your Personal Demons

The wax has hit the fan at last. Dorothy’s (Abigail Shapiro) imaginary haunter the Candlemaker is loose and has reduced a fairground to a garden of horrors. He has turned people into wax while goading Dorothy with worse if she keeps trying to restrain him. The Chief (Timothy Dalton) is missing in the chaos and the team decide to come rescue him and save the world – once again having no clue how the hell they’re going to do that! That’s just how the Doom Patrol rolls. Even Cliff (Brendan Fraser‘s voice, Riley Shanahan‘s body) reluctantly comes along, at the risk of missing his daughter’s wedding. He still hates the Chief’s guts and isn’t a fan of Dorothy’s, but it’s the right thing to do. 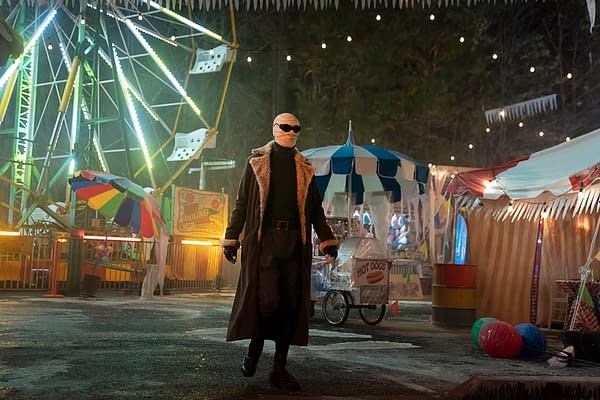 Betrayal by a loved one or a trusted person is a common theme that has run through this series since Season 1. Who else is left to betray our heroes? Willoughby Kipling (Mark Shepherd), the show’s John Constantine with the serial numbers shaved off, shows up to warn the team that the Candlemaker is turning everyone’s childhood imaginary friend against them before his shows up to beat him up and drag him away. Who his imaginary friend is turns out to be a reveal about his origins and a pretty good multilayered gag.

And they’re off to the races. Rita (April Bowlby) has to face Miss Roxy, her imaginary acting teacher who kept her company during her years as a child actor, but now too intertwined with her traumatic memory of her mother, since Miss Roxy is a version of her mother. Vic (Jovian Wade) is met with Dr. Cowboy, his friendly cowboy imaginary friend who looks like his dad, but unlike his dad, offers him endless affirmation and praise. That’s no help for Vic, who’s still heartbroken that his girlfriend Roni turned out to be a murderer and still a little boy at heart with a black and white view of the world. Cliff has the funniest imaginary friend of all: a foul-mouthed Jesus Christ who’s pissed off that Cliff abandoned him when summer bible camp was over. Only Larry (Matt Bomer‘s voice, Matthew Zuk‘s body) never had an imaginary friend as a child, but that doesn’t save him from getting trapped in wax-like everyone else. Jane is off in her underground and reliving the time Miranda was Kay’s primary personality. She discovers the time Miranda got a boyfriend as a way forward to maturity, only to be horribly betrayed and traumatize Kay and all the alters, which prompted Miranda to destroy herself and giving rise to Jane as primary.

And once again, it’s all The Chief’s fault. If Caulder hadn’t insisted on infantilizing Dorothy and keeping her at the mental age of 11 for over 100 years, she might have become mature enough to stop all this from happening.

In the end, it comes down to Jane and Dorothy’s paths to self-actualization. Jane finally learns the truth about Miranda and has to reclaim her place as Kay’s primary (which won’t happen till the next episode) before she can help the team. Dorothy, challenged by the spirit of her mother, finally accepts her birthright to leave childhood behind and take up her duty to face the Candlemaker. 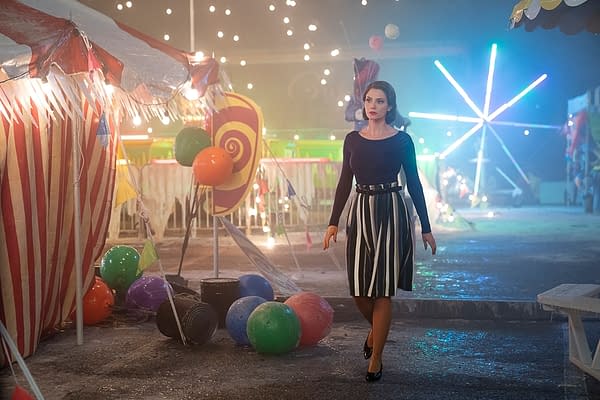 And that’s where the season ends abruptly. As cliffhangers go, it’s as good as they get. The Candlemaker was Grant Morrison‘s final arc, so it’ll be interesting to see how much the writers will use his resolution. In the comic, the Candlemaker only killed people. The TV version is more insidious and manipulative and represents more overtly Dorothy’s repressed psyche and a symbol of the show’s themes of emotional trauma and destructive urges. The finale doesn’t hit the comedic or thematic highs from earlier in the season since it has to pay off the plot now. Presumably, the 10th episode would have brought everything home, along with an abundance of comedic payoffs since writers always save the big blowout for last to go out on a high. We don’t know when production will resume on the show, or if it’s been renewed for a third season. If this is where the show ends, it’ll be one of those cliffhangers that actually ended on a perfect note: on the cusp of self-discovery but with another of many never-ending battles.

READ  PS5 launch games: Every PlayStation 5 title you can buy on Nov. 12 - CNET

The Iron Man 3 Kid Could Have Been Chinese, To Flatter Xi Jinping