AEW has been working hard to keep its production free of coronavirus, utilizing testing before anyone can enter the closed set for AEW Dynamite and having talent quarantine if they come into contact with anyone who’s tested positive for COVID-19. But one of the company’s top stars, Chris Jericho, has spent the weekend playing shows in North and South Dakota, including one scheduled for tonight in Sturgis, site of a biker rally that is estimated to bring 250,000 people into the town. That show, like the one Fozzy played last night, will take place indoors.

But despite playing in Sturgis, Chris Jericho doesn’t think he’s gone Hog Wild. Tthe Demo God isn’t all that worried that he could be putting himself, as well as his fellow athletes in AEW, at risk. In comments from a livestream transcribed by Heel by Nature, Jericho defended the decision to go on with the show. 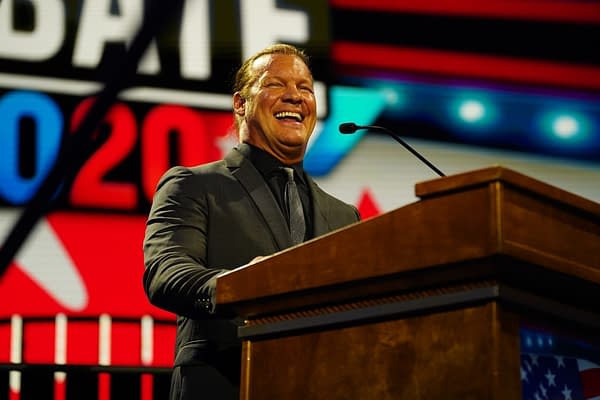 A moment from the Super Wednesday Debate between Chris Jericho and Orange Cassidy on AEW Dynamite 8/5/2020 [Photo: AEW]”We actually did four shows this week, and the reason for that is we had our ‘Save the World Tour’ which was originally scheduled for April and May, but it got postponed to July and August, then got postponed to October and November. Four shows remained in August, and I was like ‘How?”. The shows are in South Dakota, and North Dakota, and we have one in Fort Madison, Iowa, which is right near the border of South Dakota,” Jericho explained. “The reason why the shows have happened is because these states of North Dakota and South Dakota have low COVID cases, less than 1000 in both states, I think Florida had 9000 today alone.”

Jericho went on to say, “The venues are either outside, or they are half capacity. We are sold out tonight in Minot with I think 50% capacity, last night we were sold out in Sioux Falls, SD with 35% capacity. We hand out masks at the door, the temperature checks. We stay on the bus all day, the Fozzy crew and camp have been tested.”

Of course, while a concert venue may have a reduced capacity, that doesn’t mean all of those fans won’t be squeezed into the very front of the floor near the stage, as anyone who has ever been to a concert can tell you. Well, I guess we’ll see if Jericho has any problems passing the COVID test before his big match against Orange Cassidy on Dynamite this Wednesday. Hopefully, everything goes according to plan.

Chad McMahon is a lifelong professional wrestling fan and now journalist. Chad’s interests also include comic books, movies, netflix, and other sports including football, baseball and basketball, both college and professional.

TikTok influencers break down how they make money