Achilles, Get in the Horse

If I’ve learned anything from my brief time with a pre-release build of A Total War Saga: Troy, it’s this: Don’t piss off Achilles. He will walk over to you, no matter how many guys you have in your army, and stick you in the ass with a sharp spear.

Good thing that I’m Achilles, then. 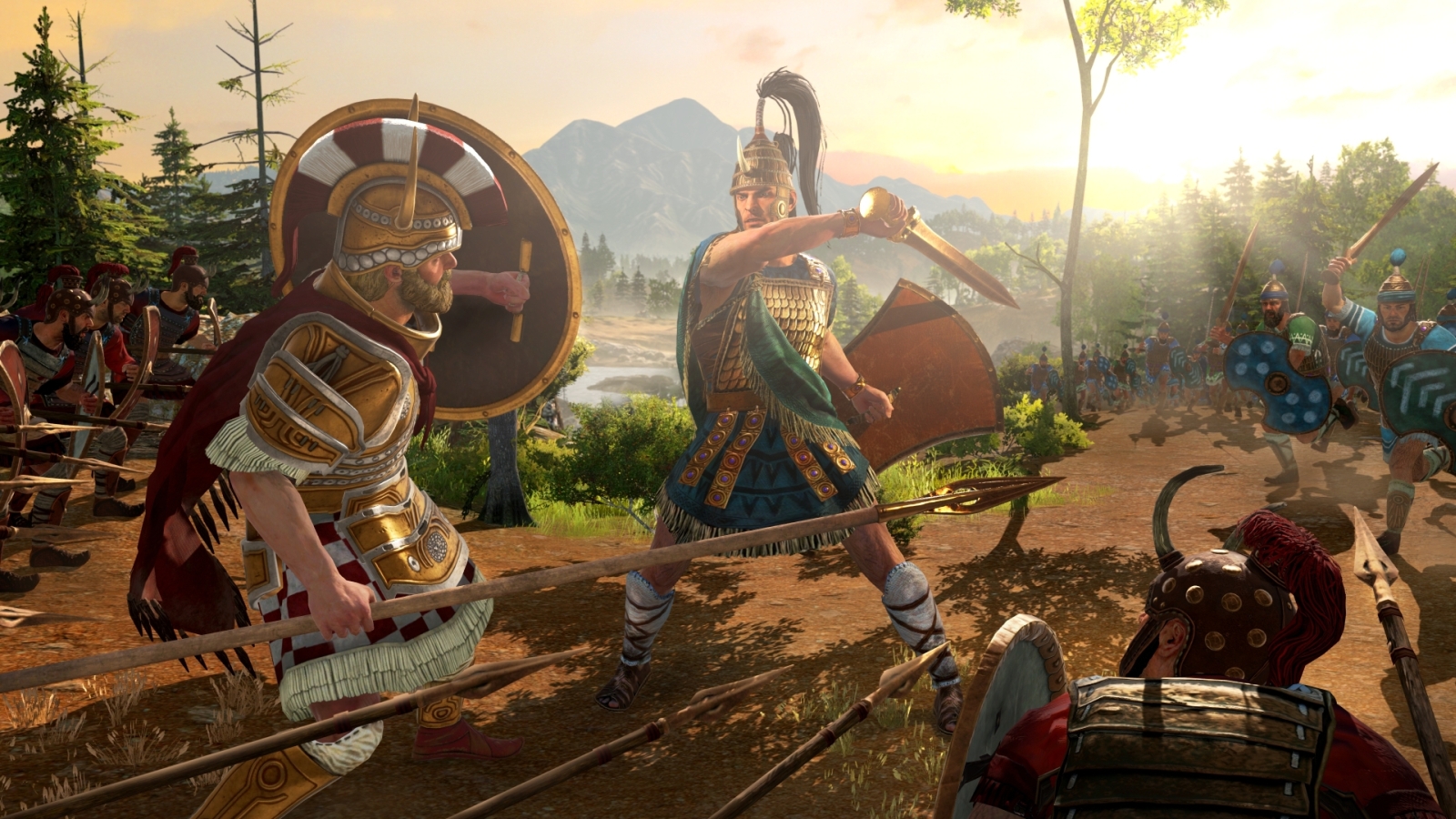 In case you haven’t been keeping up and are wondering what Creative Assembly are doing in ancient Greece when its epic foray to classical China has barely celebrated its first birthday, Troy isn’t a mainline Total War game. The title, A Total War Saga: Troy, is the telltale sign. Games in the Saga line are intended as smaller-scale experiences, and spaces for Creative Assembly to mess around, trying out new gimmicks and drastic overhauls that  might seem out of place in the kind of era-spanning scope of a marquee release.

Like 2018’s Thrones of Britannia’s focus on the time of Alfred the Great and Fall of the Samurai‘s tackling of the Boshin War (though released in back 2014 as a Shogun 2 expansion, Fall was retroactively added to the Saga line), Troy zooms in on a single major region, and a single, relatively contained span of time, and in this case, one that’s quite a bit more recognizable in terms of world history.

You guessed right: It’s the Trojan War! The decade-long dust-up between an alliance of indignant Greek kings and the Trojans over a pretty lady has been chronicled in countless different ways over the course of European civilization, from the Iliad to Troy (2004), and now you too have the privilege of reenacting it all on your computer screen.

But “reenactment” might be the wrong word, seeing as this is still a Total War title at heart. The famous combination of turn-based strategizing and real-time tactics is still intact, simulating an approximation of of Mycenaean Greece and Asia minor, circa 1200 BC. Players will take control of hero-kings from both sides of the conflict, including familiar names like Paris and Hector on the Trojan side, and Achilles, Menelaus, and Agamemnon on the Greek side.

Your hero choices make huge differences on your play experience, as each faction leader comes with a bespoke gameplay gimmick that changes how their faction plays. My first choice, Achilles, practically personifies his kingdom, meaning that when he’s sad, everyone is sad and when he’s mad, everyone‘s mad. His mood swings, influenced both by scripted events and in-game factors, have faction-wide effects. An indignant Achilles sulks, pouts and parties hard with all around him, boosting resource gathering in his settlements and increasing the public’s happiness. But all beware an outraged Achilles: Although his mighty tantrums give his troops berserker strength, he’s far too pissed to pay attention to the details of his diplomatic dealing, or even make sure people are harvesting their crops efficiently.

Other heroes have similarly dramatic gimmicks at work. Paris of Troy might be one of the best video game approximations of what it’s like to play a Wife Guy. While he can roam the map freely as an army leader, Paris can also have Helen (also of Troy) travel to cities he controls. And that matters, because the closer Paris is to Helen, the more powerfully their dispositions affect the whole faction’s growth, settlements, and even combat units. 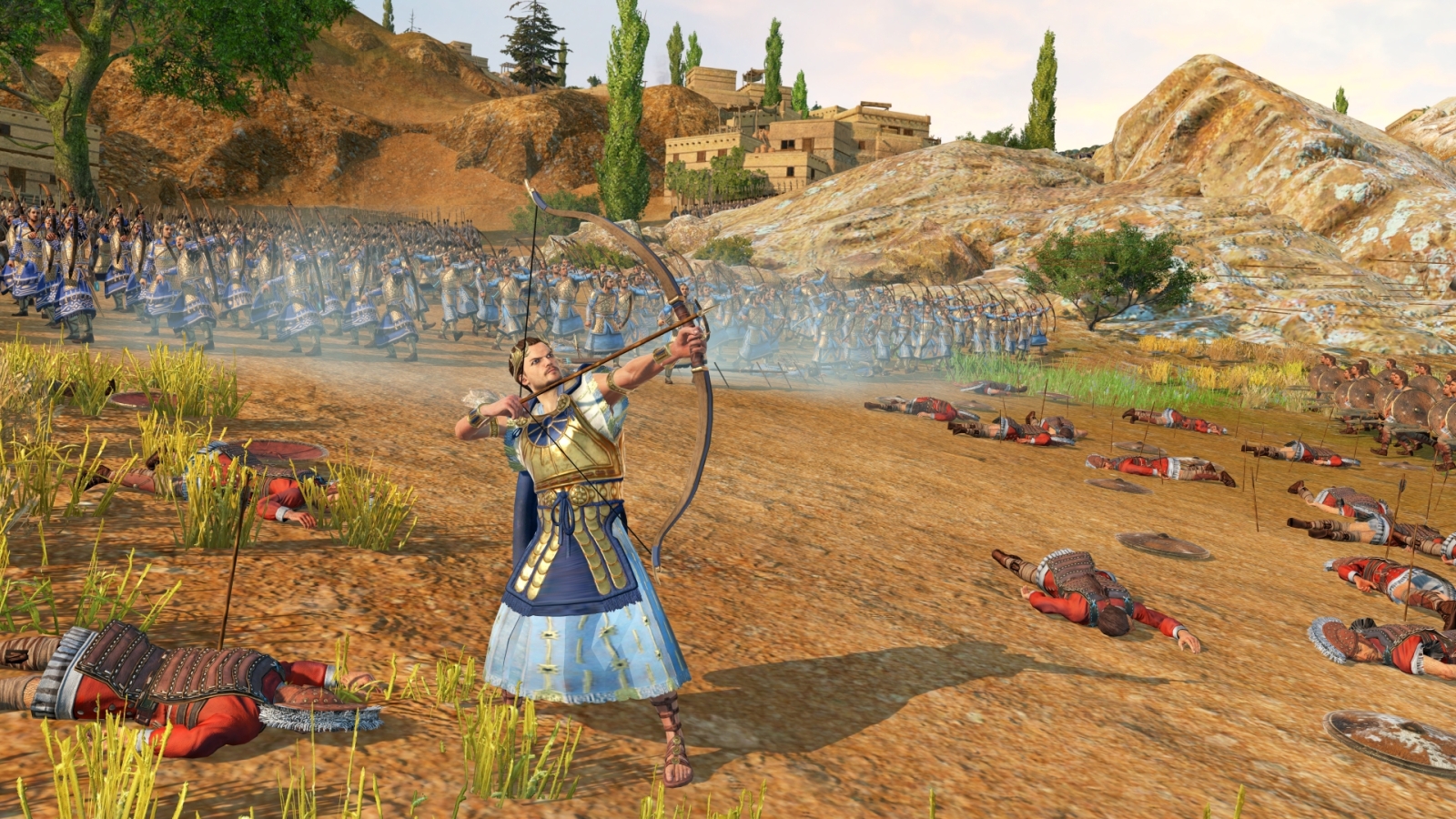 But back to the crops Achilles is ignoring because he’s too mad. You’re gonna need those crops, and more besides! A Total War Saga: Troy features a major reworking of the Total War economy in the form of a multi-resource system. Reflecting that the Trojan War took place before the wide adoption of currency-based trade, Troy‘s economy features four key resources scattered across the map and its settlements. Most basic is food, required for most functions and needed in quantity to buy low-tier units. Wood, stone, and bronze make up the rest, used for construction and upkeep of higher-tier units and buildings. Gold acts as an extremely limited (the map can completely run out of gold, unlike the other resources), but valuable resource used for facilitating diplomatic deals, purchasing agents, and accessing the most powerful soldiers.

READ  Dontnod's Twin Mirror gets real weird with it in December

The use of multiple resources, and the fact that not every faction has all five available in its home territory, makes for an interesting dynamic as you move to acquire or trade for what you need. You can set up single barter deals with other factions, assemble trades-over-time that exchange resources at a set rate over a series of turns, or do the usual thing and conquer territories with the stuff you want. Mighty Achilles will shed no blood for oil, but will spill plenty for some bronze to outfit his Pthian Spears. 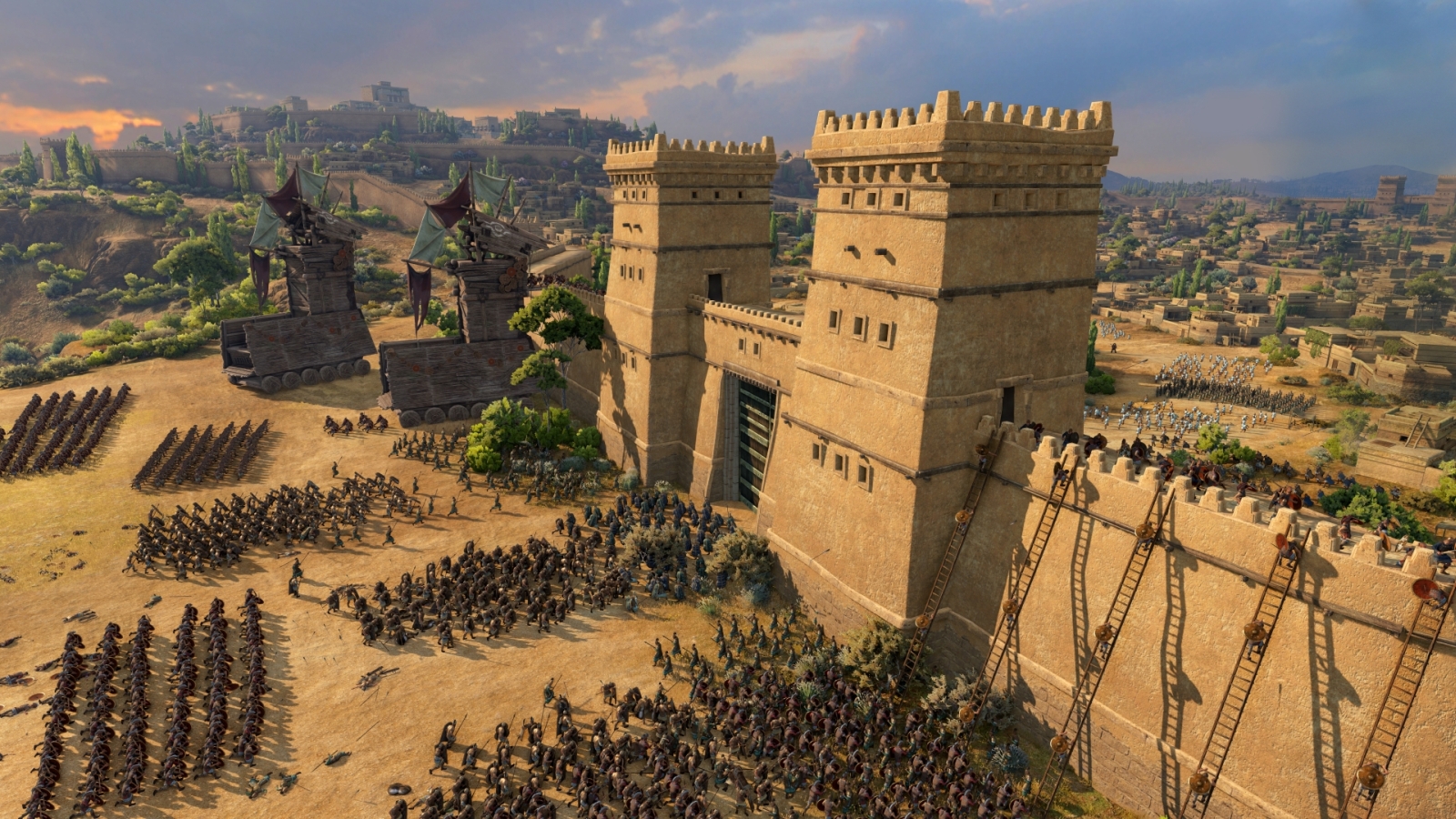 Troy also brings some interesting twists to Total War‘s real-time combat. Like the historical combat of the late bronze age, the Greeks and Trojans of a thousand years before Christ fought mostly on their own two feet. Large formations of cavalry were practically unheard of, with the scarce horses available used to haul around chariots.

Therefore most of Troy‘s fighting units are infantry-based, divided into light, medium and heavy categories. The differences between these types are more pronounced than in previous games, trading some realism in favor of fostering a clearer tactical dynamic. For example, heavy infantry (particularly when bolstered by a nearby hero) are almost impossible to take down when charged head-on, but are almost distressingly vulnerable to flanking from light units, which can move at almost twice their speed in some circumstances. Terrain effects also play a role, with heavy units getting bogged down in mud and swamp while light units can hide in long grass, able to move and even launch missiles unseen.

The game even includes “mythic units”, special groups of elite infantry or strategic-map agents inspired by the creatures told of in the legendary background of the Trojan War and the Epic Cycle. Rather than a lady with snakes for hair, the “Gorgon” of A Total War Saga: Troy is an intimidating lady with snakeskins woven directly into her ‘do. And instead of turning men to stone with her gaze, she can instead stare down an entire enemy army, setting some portion of them to flight before a battle even begins (useful for whittling down a garrison prior to a siege fight). Creative Assembly’s attempts to find the “truth behind the myth” make for an interesting middle ground between the pure fantasy of, say Total War: Warhammer, and the more grounded realism of the mainline historical titles. Similarly, heroic units, like Achilles himself, are toned down from the superhuman Dynasty Warriors antics of the heroes of Total War: Three Kingdoms‘ Romance mode, they’re still unique and have an irrepressible battlefield presence. They’ll also seek other heroes out for one-on-one battle. Once again, Achilles takes particular relish from vanquishing other heroes in combat, bolstering his status as a “Living Legend” and enhancing his faction’s strategic-map benefits. 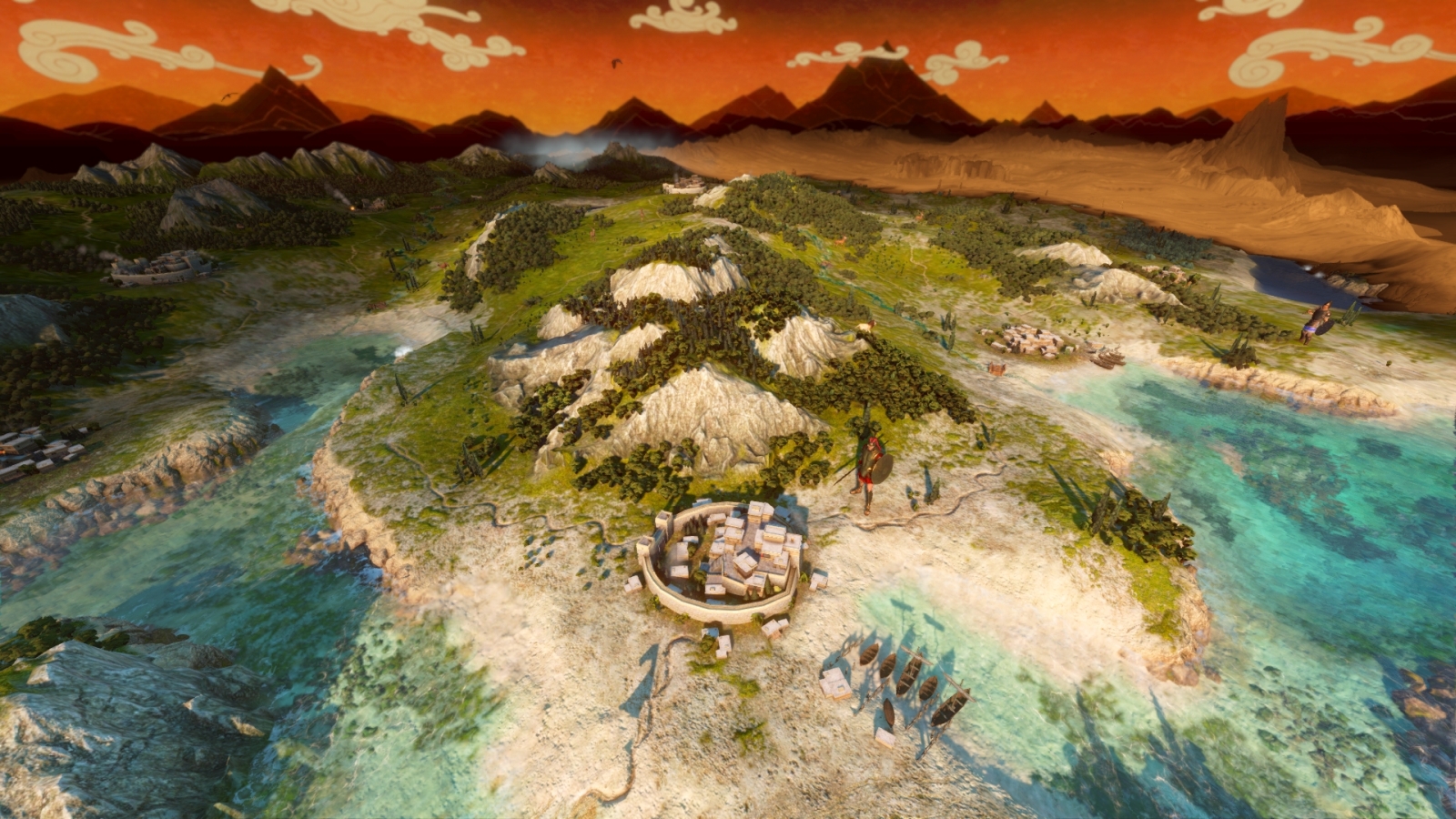 And yet, there’s more that I’m not quite in a position to speak definitively about. A Total War Saga: Troy might be part of a line that sells itself as smaller in scope than the mainline games, but it’s still pretty huge. I’ve spent over 14 hours on my opening campaign, and I’m barely past what could be called the mid-game. Heck, my Achilles has mostly been tooling around and conquering my Greek neighbors, rather than crossing the sea to kick Trojan ass and further his “Epic Mission” (an alternative, more narrative-based set of victory conditions).

Regardless, while I’m not quite ready to put a number on this impression of game (hence the “in progress” tag), I can say that A Total War Saga: Troy is shaping up to be quite a characterful take on the franchise, and I could stand to see a number of its changes make their way over the next time Creative Assembly wanna go bigger.

[This review-in-progress is based on a retail build of the game provided by the publisher.]