Fortnite: Battle Royale developer Epic Games may have just filed the lawsuit of the decade, and depending how the case unfolds, it could forever change the flow of money between consumers and the companies vying for their dollars on platforms like Apple’s App Store.

On Thursday, Epic Games — a corporate giant in its own right — positioned itself as the David facing off against the Goliath that is Apple in a bitter feud worth hundreds of millions of dollars. You can’t play Fortnite on iPhones anymore. A lawsuit has been filed. There was even a party within Fortnite that featured a video dunking on Apple.

To say that shots have been fired — metaphorically speaking, of course — would be an understatement. How did Epic Games go from reducing the cost of V-Bucks in the morning to filing a lawsuit against Apple in the middle of the afternoon? And why was the culminating moment of it all an image of Brite Bomber from Fortnite hurling the Rainbow Smash pickaxe at a black-and-white giant TV screen?

Here’s how it happened in real-time, and the four things you need to know about Apple v. Fortnite. 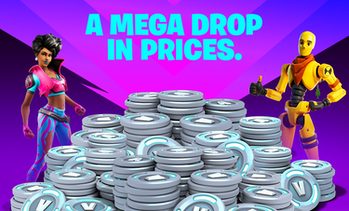 ‘Fortnite’ reduced the real-life cost of its in-game currency drastically, but the target may have been Apple all along.Epic Games

4. Epic Games circumvents Apple’s payment methods — Everything began around 6 a.m. Eastern when Epic Games announced via Twitter and a blog post something called “The Fortnite Mega Drop,” which is quite simply a permanent 20 percent reduction in the cost of V-Bucks, the in-game digital currency.

For as long as Fortnite has been around, the conversation rates for V-Bucks maintained a consistent price point of $9.99 for 1,000 V-Bucks with increasing discounts the more you purchased all the way up to $99.99 for 13,500 V-Bucks. The best you could get was 135 V-Bucks per dollar if you invested in the bulk purchase, but now, V-Bucks are 20 percent cheaper at all tiers.

The more controversial part of the Mega Drop, however, has everything to do with a new way to pay for V-Bucks on mobile devices.

Epic Games also released a new mobile payment method called “Epic direct payments” that, in function, bypasses traditional methods on mobile devices. It offers a 20 percent discount to users that use the direct payment method. Or they can pay the original price, which is subject to the 30 percent fee that companies like Apple would normally collect if the transaction happens on an iOS device.

READ  Ninja has returned to Twitch in new exclusive deal

“If Apple or Google lower their fees on payments in the future, Epic will pass along the savings to you,” the company promised in the blog post.

The gambit here was to circumvent Apple altogether, which no other developer has been allowed to do in the past. Obviously, anyone would rather pay $7.99 than $9.99 for the same exact thing.

From the consumer’s perspective, who cares where the money goes? As it turns out, Apple cares very much.

Anyone who already had Fortnite on their Apple device can still play the game, Polygon reports. In-app purchases even work. But the game has been removed from the App Store, which means there isn’t any way for someone to download it. At this rate, there may never be again.

The imagery features a collection of people in a room only lit by a massive, looming black-and-white TV screen. That, coupled with the punny title, immediately seemed like an obvious reference.

Though it aired in some local markets beforehand, perhaps the single most famous Super Bowl ad of all time aired during CBS’ broadcast of Super Bowl XVIII on January 22, 1984. Simply titled “1984,” the commercial positioned then-underdog Apple as a revolutionary company that could rise up and challenge IBM, which had seemingly monopolized the personal computer market. It likened IBM to the dystopian “Big Brother” entity from George Orwell’s 1984 with Apple as the revolutionary who would overthrow the totalitarian, monopolistic regime.

The Nineteen Eighty-Fortnite video is essentially a shot-for-shot remake of the classic commercial, except Fortnite characters are the new revolution, and Apple is the new monopoly, ending with the statement: “Epic Games has defied the Apple Store Monopoly. In retaliation, Apple is blocking Fortnite from a billion devices. Join the fight to stop 2020 from becoming “1984.”

#FreeFortnite has become the rallying cry.

There’s little doubt that Epic planned the entire thing, but why?

Epic is accusing Apple of a “series of anti-competitive restraints and monopolistic practices in markets.” In plainer terms, the accusation is that Apple is monopolizing the distribution of apps and the processing of payments within those apps.

Is this a valid lawsuit? A court will have to decide, but this isn’t the first time Apple has faced similar accusations. Last year, the company was sued by a pair of software developers who called out the 30 percent fee among other complaints. Essentially, Apple uses the enormous popularity of its iOS devices to force companies into accepting a 30 percent cut of all profits. And considering that there’s no other easy way to buy and download apps on an iPhone, that sure feels like a monopoly.

You could argue that Epic is just the first company big enough and brazen enough to call Apple out for this behavior and actually win.

READ  AMONG US is PAY TO WIN

Then again, Epic Games isn’t a non-profit organization. The developer announced on May 6 that Fortnite had 350 million registered users. A May 14 Sensor Tower report estimates that 96.7 percent of all mobile users are on iPhones to a tune of about 125 million installs. (Granted, there’s a lot of overlap between console and mobile user registrations when the game has crossplay.) That same report claims that overall spending within Fortnite reached $1 billion on mobile devices barely more than 2 years after its release with more than half of all spending happened via the App Store.

Conservatively, Fortnite players spent more than $500 million in the last 2 years on their iPhones and iPads, and Apple was there to take a $150 million cut for doing … what exactly? (Hint: It’s almost nothing.) One giant company gouging a slightly smaller giant company one seems unfair, but is it illegal? Keep in mind that Epic Games is owned 40 percent owned by Tencent Holdings, which has an estimated market cap of nearly $510 billion (that’s a quarter of Apple’s size at a market cap of nearly $2 trillion). Epic Games alone is valued at a paltry $17 billion by comparison.

As Epic points out in the opening statement of the lawsuit, Apple was once the underdog to IBM’s monopoly, and the original “1984” commercial was a brilliant stroke of marketing that helped launch it into prevalence as a serious rival. Except now, Apple has become the very thing it claimed to once despise.

“In 1984, the fledgling Apple computer company released the Macintosh — the first mass-market, consumer-friendly home computer,” the opening to the lawsuit reads. “The product launch was announced with a breathtaking advertisement evoking George Orwell’s 1984 that cast Apple as a beneficial, revolutionary force breaking IBM’s monopoly over the computing technology market.”

Now, “Apple has become what it once railed against: the behemoth seeking to control markets, block competition, and stifle innovation.”

I never thought I’d see the day when Fortnite, a game where players have to dance on inanimate objects on a weekly basis, would be leading the charge against monopolization in a post-capitalist society. Yet here we are.

This story is developing.

Apple vs. video games: an explainer of its many showdowns