Rage goeth before a fall as we finally take a look at the problems that made ol’ Jade Jaws takes a much meaner look at the world.

Marvel’s future history clearly explains that at some point, the powers of the world manage to blow themselves up without any supervillains or ridiculous costumes. That leaves only one radiation-powered being at the top of the heap of skeletons — the future version of the Hulk called the Maestro. Finally, with its creator at the helm, you can find out exactly what happened to change the arguably heroic alter ego of Bruce Banner into a despot, a tyrant, and a torturer. Maestro #1 is one seriously depressing book, but perhaps that’s apropos given the subject matter at hand. 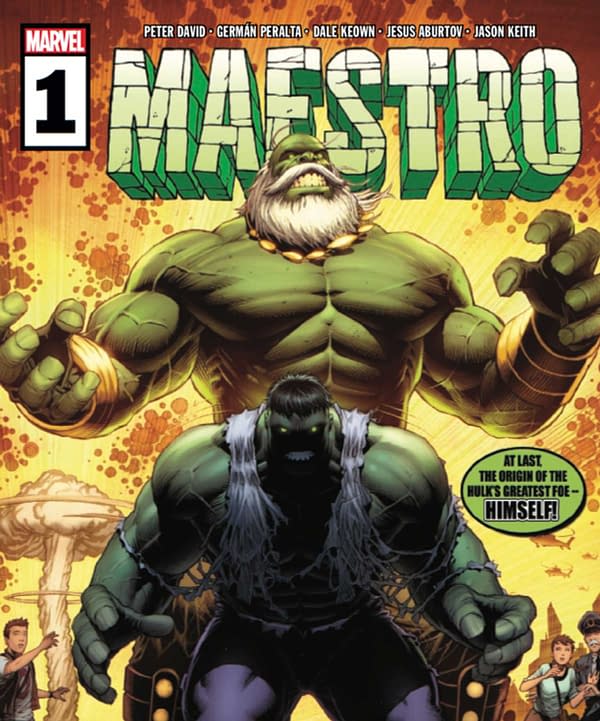 The key events are already understood before you get into what turns out to be a red herring in the plot. You know things end badly for this tedious little human experiment. What’s effective with David’s script is the surprisingly calm focus that the lead character has when faced with increasingly frustrating facts. The woman you loved? Dead, long long ago. Your best friend? Same, a handful of ashes. The heroes you called colleagues, who stood side by side to save the world again and again? Dead and forgotten. When faced with the reality of his life, he thinks to himself in voiceover caption, “now this … I understand,” responding accordingly. If you’re continuity nut, this is very much like the Professor Hulk personality popularized during David’s legendary run — smart and efficient, strong and effective, most of the upside and little of the downside.

The esoteric struggles of the modern Immortal Hulk and the childlike simplicity of the cinematic and classical versions are, in essence, sidelined, and there’s nothing wrong with that, per se. The visual storytelling from German Peralta, Jesus Aburtov, Dale Keown, Jason Keith, and Ariana Maher does a great job of visually presenting what is essentially a tragedy. You get a great sense of the gravity of it settling on these huge, verdant shoulders.

What’s the issue? Well, in a sort of “read the room” sense, perhaps this wasn’t the best time to release a dystopian version of how every hero you ever believed in failing in their core mission and how everything you ever loved will die, hard and ugly. This is a fine Hulk issue; this is a solid enough plot with skilled craftspeople doing their job at an effective level. The question is, even though the tale is well told, is it one you want to live in your head, especially now? Are the storytellers at play unwilling or unable to envision a future where it doesn’t all end in tears? If these questions are too heavy for you, staring down elections and face masks, perhaps this subject matter might not be the brightly colored escapism you crave, but the bleak horror our actions and inaction, in many ways, prove we deserve. RATING: HONORABLE MENTION.

THE STORY YOU’VE WAITED DECADES FOR: THE ORIGIN OF MAESTRO!
Almost 30 years after the landmark story Future Imperfect, legendary INCREDIBLE HULK scribe Peter David returns to the far-future version of the Hulk known as Maestro — the master of what remains of the world. With astounding art from HULK veteran Dale Keown and up-and-comer Germán Peralta, Maestro will answer questions that have haunted Hulk fans for years — and inspire some new ones. How did the world fall and the Maestro rise? What happened to the world’s heroes in between? And where is the Hulk we know and love? Find out here!

Hannibal Tabu is a writer, journalist, DJ, poet and designer living in south Los Angeles with his wife and children. He’s a winner of the 2012 Top Cow Talent Hunt, winner of the 2018-2019 Cultural Trailblazer award from the City of Los Angeles Department of Cultural Affairs, his weekly comic book review column THE BUY PILE can be found on iHeartRadio’s Nerd-O-Rama podcast, his reviews can be found on BleedingCool.com, and more information can be found at his website, www.hannibaltabu.com.
Plus, get free weekly web comics on the Operative Network at http://bit.ly/combatshaman.

Fortnite Getaway is Back!