All Marvel season 4 comic pages in Fortnite so far

Fortnite has partnered with Marvel for the upcoming season of the game and has teased Thor as the main character of Chapter Two, season four. Players can now find four comic book pages in the game that explain how Thor and Galactus ended up on Fortnite‘s island.

The first two pages were added on Aug. 22, while the latest two came on Aug. 23. The series is teasing the launch of Fortnite’s Chapter Two, season four on Aug. 27, so more pages should be released showing the new plot.

The story begins with Thor as the recently-crowned King of Asgard and the new Herald of Thunder, which also makes him the newest herald of Galactus. 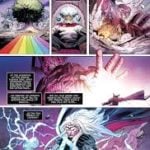 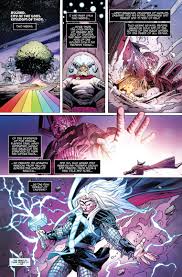 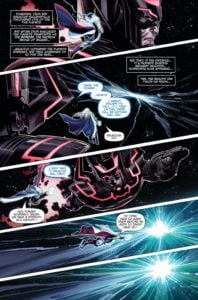 Galactus crashes on Asgard beaten down and warns Thor of the “coming of the Black Winter, of the death of all things.” Black Winter is the name of a multiversal cosmic entity with a power similar to Galactus, but stronger.

They work together to find five planets for Galactus to absorb and push Black Winter away. After Thor evacuated the first planet’s inhabitants and Galactus devoured the planet, they noticed a new source of power in the distance, which causes Galactus to lose track of the mission.

Thor goes to the planet to warn the inhabitants of Galactus. He arrives on Fortnite’s island and sees characters that players are familiar with and tries to speak to them. But things get out of hand. 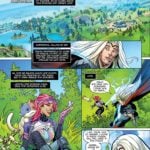 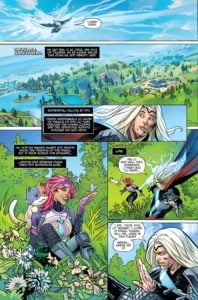 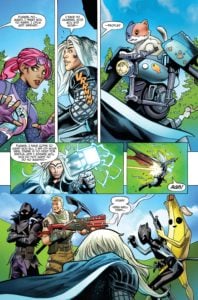 The latest comic pages added indicate that Thor will have to face Fortnite characters in a battle before he can earn their trust, while Galactus makes his way to the island.

This story follows the beginning of the Battle of the Black Winter arc from the Thor (2020) comic series. This arc has already closed in the comics and other characters, like the Silver Surfer, have a role in the story.

The new season of Fortnite will be Marvel-themed, bringing new hero skins based on their comic versions and not the actors from the live-action movies. So far, all previous skins have been based on the actors.

There are other Marvel characters available as skins in Fortnite, such as Captain America and Deadpool. Wolverine and Storm from the X-Men series will also be added to the game in the new season, according to a leak.

Fortnite Chapter Two, season four launches this week on Aug. 27. The update will be available on PC, Xbox, PlayStation, and the Nintendo Switch.