Bill and Ted Face the Music Writers On The Movie&#039;s Surprise(ish) Ending 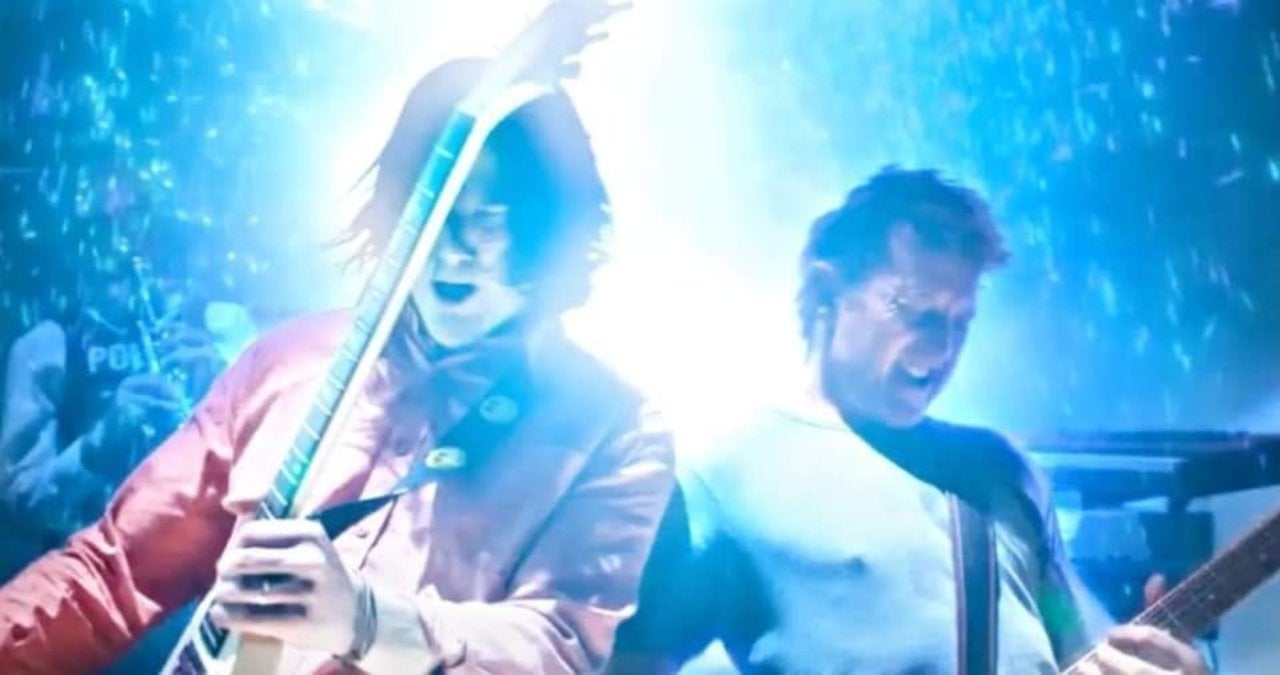 Thirty years after the characters debuted in Bill and Ted’s Excellent Adventure, the two great ones — Bill S. Preston, Esq. (Alex Winter) and Ted “Theodore” Logan (Keanu Reeves) — had to face the music. That’s both literal and figurative, as Bill and Ted had to finally face their destiny. In the original film, a man from the future named Rufus (George Carlin) came back in time to tell Bill and Ted that their band, Wyld Stallyns, would create music that would unite the world and create a utopian future. Thirty years on, they have never written that song, the band is splintered, and time is running out.

Enter Kelly (Kristen Schaal), Rufus’s daughter, who brings the pair back to the future in Bill and Ted Face the Music, where they are told that if they don’t write the song in the course of a few hours, reality will fold in on itself, ending the universe altogether. Their solution: travel to see themselves, a few years from now, and steal the song after it has already been written, so that they can have it in time to save the world.

That’s what you’ve seen from the trailers, but the ending is a little more twisty than that, and we broke it down with the film’s writers. Spoilers ahead for Bill and Ted Face the Music, in theaters and on-demand now.

There are a few things at play: first, Kelly believes the Wyld Stallyns’ destiny to be settled history, as did her father. Her mother, The Great Leader (Holland Taylor), sees the Wyld Stallyns’ destiny to be more of a prophecy and, as time is running out, she and others in the future are having a crisis of faith. There is, she argues, another interpretation of the information Rufus was working on — that it isn’t the song, but the deaths of Bill and Ted, which will be the catalyst for a better tomorrow.

By the end of the movie, Bill and Ted are still alive, and reality has been repaired, suggesting that Kelly and Rufus had the right idea. But writer Ed Solomon said it isn’t that simple. When a robot, sent from the future to kill Bill and Ted, accidentally kills their daughters (and Ted’s dad, and Kid Cudi, and a bunch of historical figures) instead, Bill and Ted demand that the robot kill them, too, so that they can go to Hell and save their kids.

Bill and Ted have been to Hell once before, remember: in Bill and Ted’s Bogus Journey, a future zealot named DeNomolos (Joss Ackland) had sent killer robots, designed to look like Bill and Ted, back in time to murder their counterparts, take over their lives, and torpedo their first chance at a global audience for the band. Bill and Ted met Death (essentially the Grim Reaper, a la Bergman’s The Seventh Seal and played by William Sadler, who they bested at a number of games, forcing him to bring them back to Earth. He would later join the Wyld Stallyns as their bassist and, thanks to some attempted sabotage by DeNomolos, the Wyld Stallyns suddenly had a massive global audience, putting them on the road to saving the world.

Bill and Ted’s second trip to Hell, where they once again met Death, saved their daughters (and a number of musical luminaries), and headed back to Earth, was key to the pair saving the world, as it put all of the right pieces in place for the film’s conclusion. Once back on Earth, Bill and Ted realized that they didn’t have to write the song: the musical luminaries assembled by their daughters could do most of the heavy lifting, and their daughters could produce and arrange the performance, with Bill and Ted playing guitar and doing some last-minute legwork to ensure everything happened the way it was supposed to.

“It turned out that both interpretations are correct and so it’s probably arguably whether it’s viewed as prophecy or settled history,” Ed Solomon, one of the film’s writers and co-creator of Bill and Ted, told ComicBook.com.

Solomon explained that the reasoning behind throwing the Wyld Stallyns’ destiny into a bit of doubt was deceptively simple: since the movie spent more time in the future, and seeing events from the point of view of the 28th Century, than had the previous installments, he and co-writer Chris Matheson thought that it would be “interesting to present it as prophecy.”

That also presented more story potential because it presents The Great Leader’s acts not as irrational and anger-driven, but as a desperate act born out of a crisis of faith.

The notion that Bill and Ted’s daughters would be the key — that it isn’t “their song” so much as their actions, their band, and their hope in the future, that saves the universe — was always a part of the story, according to Solomon and Matheson.

“We knew that this was what it was going to be about,” Solomon told ComicBook.com. “In fact, in our earliest drafts of it, it was much more about that, specifically on a personal level and not even as much about the whole fate of the universe.”

“Right,” Solomon said. “I think Chris and I both feel like it’s meant to be a surprise to Bill and Ted, but I don’t think we expected it to be a giant surprise for a moviegoing audience to see where it’s headed. We didn’t think there was a way we could truly make it a legit, full-on surprise. I just hope for people that it lands as they watch it empathically through Bill and Ted’s eyes.”

“If it works out, it will feel inexorably correct,” Matheson added. “Like, ‘Right. Of course that’s how it had to end,’ because from our standpoint, from the very start that had to be the ending. We knew that. We knew that the first time we got together with Alex and Keanu, to just run ideas around. That idea was there from the very start, and there was no version of this that we wanted to tell that wasn’t that.”

How, exactly, does it all work, though?

The time-travel mechanics of the Bill and Ted movies have always been a little seat-of-your-pants. From the beginning, Rufus never actually introduced himself to the pair; the only reason they know his name in Excellent Adventure is that a future version of themselves call him “Rufus.” That version, though, only knows because when they were younger, the future version said it to them, and so on.

In that same, film, the pair are able to do things — steal a set of keys, set booby traps — by agreeing, and remembering, to do so using time-travel, after their history report is already over and they have succeeded. That those things were necessary to succeed to begin with doesn’t make much difference — after all, it worked!

The events of Bill and Ted’s Excellent Adventure are necessary to keep the band together, and save the world — not just because Rufus helped them pass their history report, but because they first met Princesses Joanna and Elizabeth there, and Rufus brings them to the future to join the band and, ultimately, to give birth to the daughters who would help Bill and Ted save the world in Face the Music. If you pay close attention, in that movie, Rufus says that “Wyld Stallyns music” has become the basis for the future. He does say that “your music” will change the world, but it could be argued that even in the original telling, Bill and Ted would have had a band behind them to help. Rufus remains equally enigmatic in Bogus Journey, leaving a lot of room for interpretation by the audience (or, apparently, his wife and daughter).

In Bogus Journey, when DeNomolos presents his plans to Rufus, and Rufus tells him it won’t work, DeNomolos tells him “time will tell.” Rufus fires back, “time has told. What at least DeNomolos, and possibly both men, don’t know is that since DeNomolos is the one who will ultimately give Bill and Ted their first big platform (as well as access to a time machine at just the right moment to leave, learn to play guitar, and have their daughters, then come back in time for the rest of the concert), it’s arguable that DeNomolos’s attack on the Wyld Stallyns was as necessary as anything else that happens in the trilogy to help them meet their destiny. Certainly their meeting with Death, setting the stage for his helping them in Face the Music, was key.

There’s an element of that predestination in Face the Music, even before the ending proper. After all, speaking logically, if reality were to collapse in on itself in 2020, there would be no far future to sent Kelly back from — and really, not even any of the much shorter-term futures where Bill and Ted visit 2- and 5- and 20-years-older versions of themselves. That, along with the way Excellent Adventure and Bogus Journey played out, gives you the logical basis for how the Face the Music ending works: it works because, essentially, it works — and it worked in the first place becuase Rufus’s, and Kelly’s (and even Dennis’s, the murder robot played by Anthony Carrigan) future is shaped by their own actions, which in turn inform their past, and shape Bill and Ted’s future.

Bill and Ted Face the Music is available on digital and on-demand now. You can also catch it in hundreds of theaters around the country.