Today&#039;s X-Factor #3 From Marvel Comics Has A Fortnite Crossover Too

Bleeding Cool was the first to tell you that the Marvel/Fortnite crossover takes place between panels in Thor #4. We were also the first to tell you that Wolverine #5 also featured a Fortnite crossover with Logan being snatched by Sif and the Bifrost Gate, before being returned seconds later. Well, it seems that today’s X-Factor #3 wants to join in as well. Concluding with a bunch of mutants sitting round playing poker. 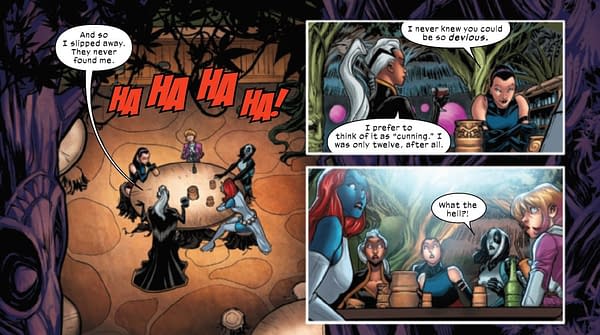 Only for them all (aside from Gwenpool) to be snatched by the rainbow bridge. 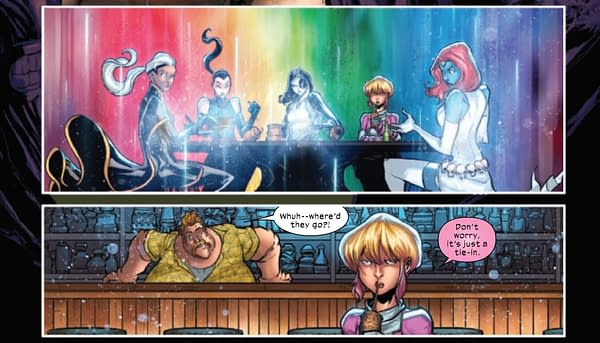 And then returned second later. I note that the taken include Storm and Mystique – but also Psylocke/Kwannon and Domino, though I don’t think they have been featured as appearing in the game. Yet. Gwenpool knows she is a comic book character and can see the strings, hence her knowledge of what’s going on – not that she’ll tell any of the others. She wants to maintain her poker face after all.

But for those collecting the Marvel Fortnite tie-ins, that’s Thor #4, Wolverine #5, X-Factor #3, the upcoming variant covers and…one other as-yet-unidentified reference, which I am told may only have been in dialogue…

X-FACTOR #3
MARVEL COMICS
(W) Leah Williams (A) David Baldeon (CA) Ivan Shavrin
DROWNING IN THE STREAM! Every streamer in the Mojoverse is desperate to get a little of the X-magic on their channel, but all X-Factor wants to do is figure out who murdered a Krakoan citizen. Rated T+ In Shops: Sep 09, 2020 SRP: $3.99

After the Island and the world of Marvel collided, powerful abilities are now at your command. During battle, adopt super-powers like Doctor Doom’s Arcane Gauntlets, Groot’s Bramble Shield, Silver Surfer’s Board, and more arriving later in the Season. In addition to new super-powers, take action with the Stark Industries Energy Rifle, a distinct weapon from Stark Labs that has a different benefit depending on how you aim. Bring your weapons and powers with you as you explore iconic locations both current and upcoming, such as Doom’s Domain, Sentinel Graveyard, and more. With the new Season comes the Chapter 2 – Season 4 Battle Pass, with 100 unlockable rewards and a collection of outfit from Marvel Heroes and Villains: Thor, Iron Man, Storm, Doctor Doom, She-Hulk, Mystique, Groot, and Wolverine. Complete each Legend’s special quest to bring out their awakening, a built-in Emote that reveals the Hero or Villain within.

X-Factor #3 published from today from Marvel. I bought mine from Piranha Comics in Kingston-Upon-Thames. Piranha Comics is a small south London comic store chain with a small south-east store in Kingston-Upon Thames’s market centre, which runs Magic The Gathering nights on Fridays, and a larger south-west store in Bromley, which also runs Magic nights and has an extensive back issue collection and online store. If you are in the neighbourhood, check them out.