Batman and the Outsiders #16

Dangling subplots war with powerful performances as it’s Black Lightning vs. Ra’s Al Ghul with the fate of the world in the balance!

As the long-standing storyline of Batman And The Outsiders draws nearer to its denouement, two costumed heroes make all-star showings as Batman plays the background. They face the immortal eco-terrorist Ra’s Al Ghul, who has acquired an energy weapon that could get him closer to his Thanos-esque goal of population reduction. 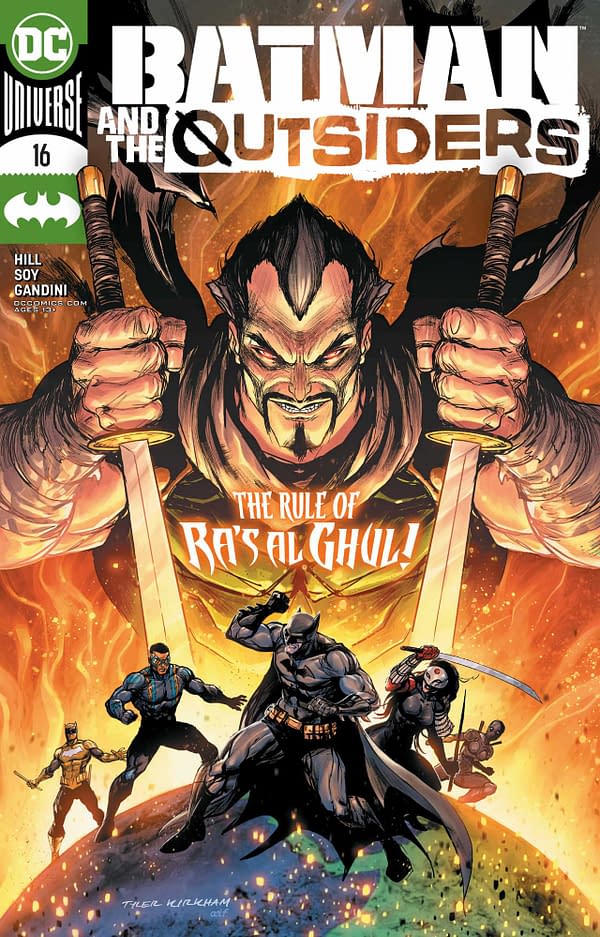 The cover of Batman And The Outsiders #16. Credit: DC Comics

The best parts about this issue are the star turns for Black Lightning and the erstwhile Batgirl called Orphan. The former shows remarkable restraint before forcibly showing that he’s possibly the most powerful person in this series, much like his television counterpart did when popping up in a crossover. The latter, courtesy of dazzling visuals from Dexter Soy and Veronica Gandini, puts on a delightful display of martial arts prowess with even her storied mother Lady Shiva taking a back seat.

In that this is a team book, however, there were a lot of team members sitting around doing nothing. There was a subplot about Lady Shiva swaying Orphan and Signal towards morally dubious methods, but there was no room in the page count to fit any of that in. Likewise, the stalling that the Demon’s Head does in an attempt to sway Black Lightning has a great set of dialogue but drags the pacing a little. These deficits hold this issue back from truly shining.

That said, Batman has two refreshing admissions that are very logical from a narrative standpoint but still manage to surprise, given his widely noted ego in regards to his own infallibility (see Brother Eye, Tower of Babel, et cetera). The character interplay in Bryan Hill’s script is top-notch and his skill in crafting these moments is undeniable.

Overall, this series often felt like it should have been one beefy original graphic novel and not a set of split up periodicals, but there is definitely something worth seeing here. RATING: HONORABLE MENTION.

Batman and the Outsiders #16

By Bryan Hill, Gleb Melnikov, Tyler Kirkham
It’s the last chance for the team to save the world—and to save Orphan and Signal from giving their allegiance to Lady Shiva! Plus, will Katana’s soultaker sword finally break for good? Will Black Lightning give off his last spark? And will Batman be able to destroy Ra’s al Ghul’s weapon?

Hannibal Tabu is a writer, journalist, DJ, poet and designer living in south Los Angeles with his wife and children. He’s a winner of the 2012 Top Cow Talent Hunt, winner of the 2018-2019 Cultural Trailblazer award from the City of Los Angeles Department of Cultural Affairs, his weekly comic book review column THE BUY PILE can be found on iHeartRadio’s Nerd-O-Rama podcast, his reviews can be found on BleedingCool.com, and more information can be found at his website, www.hannibaltabu.com.
Plus, get free weekly web comics on the Operative Network at http://bit.ly/combatshaman.

Where to find Gatherer Drones in Fortnite