PS5 Standard vs. Digital Edition price, specs, features, and which to buy

Sony may have revealed the PlayStation 5 Digital Edition alongside the overall design during the June 2020 showcase, but the company said little else about the alternate next-gen console since. But that’s all changed as of the September 16, 2020 showcase. Now, the company has finally confirmed the price, release date, and specifications for both consoles. Here’s everything you need to know.

This corroborates a rumor reported on by Spanish publication Vandal Tuesday, which reported that listings for the PS5 consoles went live on the website for Spanish retailer El Corte Ingles. The two devices were listed for the cost of $499 and $399.

Just a day ahead of the official announcement, the price was leaked by a Spanish storefront. As was spotted by and Tom’s Guide, the PS5 and PS5 Digital Edition showed up in the internal systems of major Spain retailer El Corte Ingles. The prices were $399 for PS5 Digital Edition and $499 for PS5, which both turned out to be right. 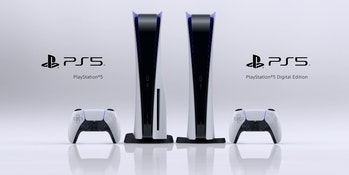 The only real difference between the PS5 Standard and Digital Editions is the disc drive.Sony

Even before the September 16 presentation, we more or less already knew that under the hood, the Digital Edition would be virtually indistinguishable from the standard edition.

Shortly after the June reveal, PlayStation’s Head of Global Marketing and Consumer Experience Eric Lempel all but confirmed as much in a PS Blog interview. “It’s a discless version [of PS5],” he said. “It’s important to note that, it’s essentially the same product. You’re not talking about any change to features, or any change to power. It’s the same product, with slight cosmetic differences, and no disc drive. So it’s all digital.”

Therefore, the only key difference we’ll see between the two consoles is the last of the disc drive in the Digital Edition. This explains why the console look almost identical, which is a totally different approach to Microsoft’s Xbox Series X and Series S.

Here’s another look at the PS5 specifications:

Is the PS5 Standard or Digital Edition better? 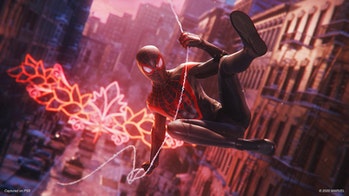 ‘Marvel’s Spider-Man: Miles Morales’ is easily the biggest launch title to get hyped for, regardless of which PS5 you get.Insomniac Games / Sony Entertainment

Particularly if you’re a fan of Sony-exclusive franchises like Marvel’s Spider-Man, God of War, The Last of Us, Uncharted, and Ratchet & Clank, then getting one of the two PS5 systems is a must. But depending on what types of games you play the most and what your favorite games are, a Digital Edition may be for you.

For any ongoing games you might be playing, you’ll want to investigate how Sony’s smart delivery equivalent works for it. With Call of Duty: Black Ops Cold War, for instance, it’s cheaper to buy a cross-gen digital version as opposed to the physical PS4 copy that you can then leverage to buy a PS5 digital version.

But here’s a closer look at some of the biggest deciding factors:

Who should get the PS5 Digital Edition — If you only play a handful of games a year, and especially if you’re dedicated to a single (or just a few) live-service games like Call of Duty, Destiny, Fortnite, Overwatch, or Marvel’s Avengers, then a PS5 Digital Edition may be the best option.

Call of Duty: Warzone (with some Modern Warfare pieces mixed in) comes in at around 156 GB whereas games like Marvel’s Avengers (58 GB) and Ghost of Tsushima (40 GB) are a bit more modest. But if you had these three games on your console with something like Red Dead Redemption 2 that comes in around 200 GB, then that’s about half of your total memory. The PlayStation 4’s operating system takes up about 93 GB of space, and that figure might be even greater with the PS5.

Which is to say that going all-in on the PS5 Digital Edition could quickly become cumbersome if you play a variety of games, and the cheaper price tag won’t be worth it in the long run if you just have to invest in external storage. You can expand your storage space with SSDs, but most 1 TB external hard drives run at least $100, so you could lose money in the long run. If running out of space on your hard drive has been an ongoing problem with your PS4, then that could be an even bigger problem on the PS5 Digital Edition.

One other important benefit, however, is that you’ll never have to worry about receiving a physical copy of a game on launch day because you can just order it directly from the PS Store. On the flip side, if you like collecting and displaying physical copies, that won’t really be an option.

If you’re a Sony diehard who plays a lot of different video games, particularly a mix of big-budget AAA games and staples like Call of Duty: Warzone that eat up a lot of hard drive space, then you should spend the little bit of extra money on the PlayStation 5 Standard Edition. Your hard drive will fill up very quickly if you go all-digital, so you’ll want the version of the console that lets you play a mix of physical and digital games.

Particularly if you have a slow internet connection, then downloading huge next-gen video games could take a long time. But if you’re playing mostly physical copies of games, then you have much less to worry about.