Fortnite Will Debut The New BTS Music Video For “Dynamite”

Epic Games is teaming with K-Pop sensation group BTS to debut a brand new music video in Fortnite this coming Friday. Much like the company has been doing with their special weekend events hosted by DJs and other artists to give players a bit of an escape, the singing group will be taking over the game on all of its servers simultaneously to present a brand new music video for you to chill out to and enjoy. The video is for their song “Dynamite”, which has had an official version released this week, but this will be the choreographed version music video version from the group. Here’s a quick quote from the company on trhe event. 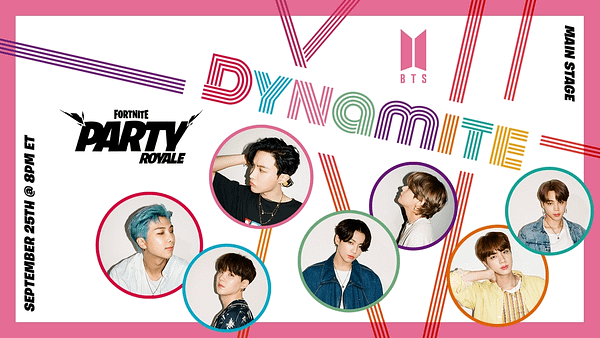 A new version of “Dynamite” will debut in Fortnite this Friday, courtesy of Epic Games.

“We’re always looking to partner with talented artists who are interested in pushing boundaries and finding innovative ways to reach fans,” said Nate Nanzer, Head of Global Partnerships at Epic Games. “BTS is not only incredibly popular worldwide, but their talent, creativity, and forward-thinking attitude made them a perfect match. We’re honored to host their premiere.”

“Dynamite” is BTS’ latest English-sung single, which hit #1 on Billboard Hot 100 for two weeks, a first for a Korean pop act. The official music video also became YouTube’s most viewed music video in its first 24 hours with 101.1 million views, so basically everyone is looking to capitalize on this one. This vieo will have never-before-seen choreography performed by the group, as it will premiere on Friday, September 25th at 8pm EDT. The premiere will take place in Fortnite’s Party Royale mode where you and your fellow players can hang out, interact, and chill to music being played in the background. Which will basically be a bunch of BTS songs. Following the premiere, players can enjoy “Dynamite (Tropical Remix)” listening party with karaoke graphics to sing and dance along. Here’s the music video that debuted yesterday.