Serious Sam 4: Say something once, why say it again?

Where did the joy go?

Serious Sam 4 is almost a carbon copy of the previous games in the series, with a little extra emphasis on story, and some technical magic tricks that allow the developer to show a huge number of enemies on screen at once. None of these things really makes a difference in the experience of playing the game itself, however.

I have so many fond memories of playing the past games. Serious Sam releases have always been simple affairs with a lot of guns and a lot of enemies, and they’re at their best when played with fast music pumping in the background.

The franchise used to deliver an even sillier take on the action of fast-paced first-person shooters like the Doom and Quake series, without any of the self-serious aesthetics or even basic nods to realism. I can’t think of many other games that operated as such effective stress relievers, even in short bursts. The Serious Sam franchise has always been a little bit of an underdog in that way, but without any meaningful improvements to that basic idea, why did we suddenly need a new one in 2020?

The last mainline Serious Sam game was Serious Sam 3: BFE, released back in 2011. That game introduced iron sights and running to the formula, which were barely incremental improvements, but the new game doesn’t even go that far. Serious Sam 4 is just more of what I already expected from developer Croteam, created with an updated version of the Serious Engine.

The past games in the series weren’t broke, and their design certainly hasn’t been fixed with Serious Sam 4. Aliens have taken over the planet, and Sam Stone is here to crack one-liners and to send them all back to hell. Like the other games in the franchise, this one is another first-person shooter with large environments, hordes of enemies to kill, and a variety of weapons, each suited to a specific tactical need, all of which should be used in turn when the action calls for them. I spent most of my time running backward in the game’s large, open areas, twisting side to side to avoid being shot, and keeping an eye on my ammo while also scanning the level for healing items and armor.

Serious Sam 4 forces me to keep multiple things in my head at once, along with a willingness to change tactics once another wave of enemies warps in to keep me busy. There are skeleton beasts that throw bones and gallop at me, diving to slash at my face with their claws. There are the infamous headless enemies who scream (through their neck-holes, I guess) while running toward me, holding explosives to make sure I don’t get comfortable in one spot for too long; belching, vomiting beasts covered with pustules; and much more.

So why do we need another Serious Sam game now? I don’t know

The enemy design has always been one of Croteam’s strong suits. Each type of enemy is easy to identify, even at a distance, and each one gives hints about their numbers, direction, and attacks through sound as well as visuals. Juggling each enemy threat without making myself vulnerable to the next is a big part of the Serious Sam magic, and that challenge comes through in this game as well.

There is very little real-world logic at play here. Instead, the game operates according to the rule of cool: Sam can carry all these guns at once because it’s cool to have an arsenal. Enemies can warp into wherever Sam is, in whatever numbers they want, because he’s meant to be overwhelmed. The story has Sam trying to find the literal Ark of the Covenant to save the world.

The problem is that I’ve played this game already, multiple times. The effect of being nearly overwhelmed, while usually just barely staying in control, is wearing off through repetition. The engine can’t quite keep up with the situations that unfold in the game or the increased emphasis on secondary characters and conversation. That’s especially apparent when there’s a pause for conversations and everyone’s face looks a little off, or when enemies seem confused by their own numbers and stand around, waiting to be picked off. 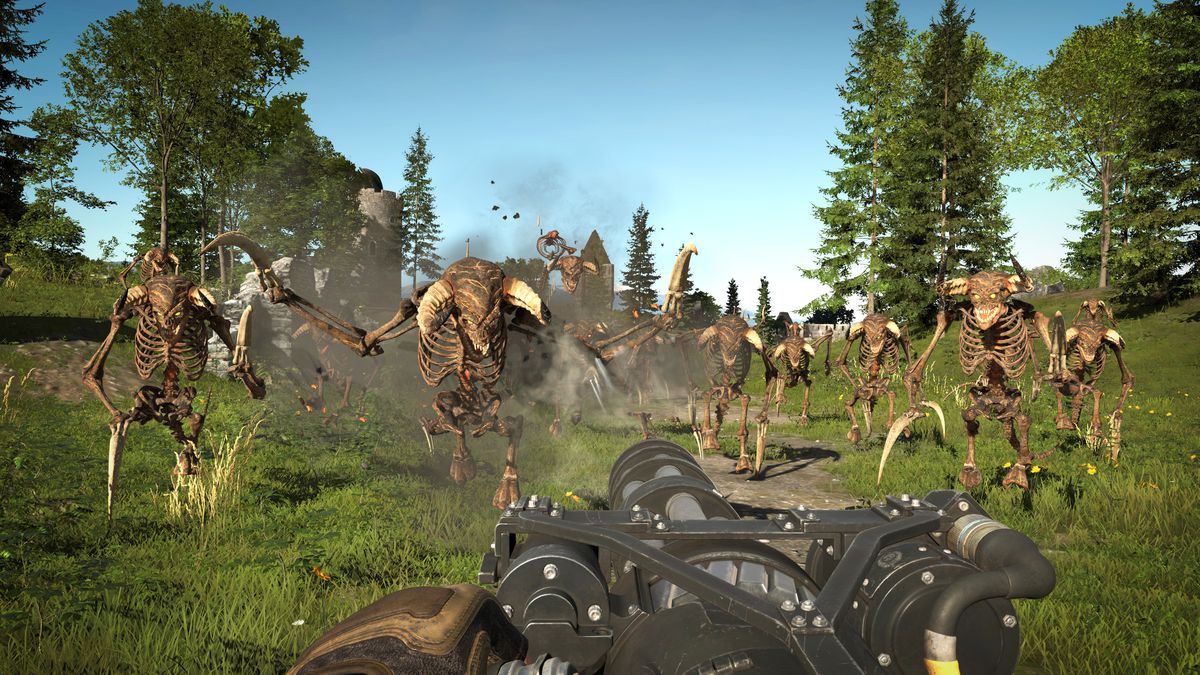 So why do we need another Serious Sam game now? I don’t know, and Croteam didn’t seem to have a good answer to offer, either. While id Software found ways to keep the tone and ideas behind the Doom series intact while branching out in play and design with Doom (2016) and Doom Eternal, Croteam seems too fond of the base Serious Sam experience to try anything as daring. So we’re left with a retread of past games, with some impressive vistas filled with enemies and not much else.

It’s not bad, but again, the joy of the old games feels like it has been squeezed out through repetition and a lack of forward motion. There’s just not enough here to allow Serious Sam 4 to compete with the other big first-person shooters of the year. Still, maybe hardcore fans will be comforted by the return of a series that barely changes, even after almost a decade away.

Serious Sam 4 is out now on Windows PC and Stadia, and is coming to PlayStation 4 and Xbox One in 2021. The game was played on PC using a download code provided by Devolver Digital. Vox Media has affiliate partnerships. These do not influence editorial content, though Vox Media may earn commissions for products purchased via affiliate links. You can find additional information about Polygon’s ethics policy here.

Apple&#039;s battle with Epic over Fortnite could reach jury trial next July - CNET