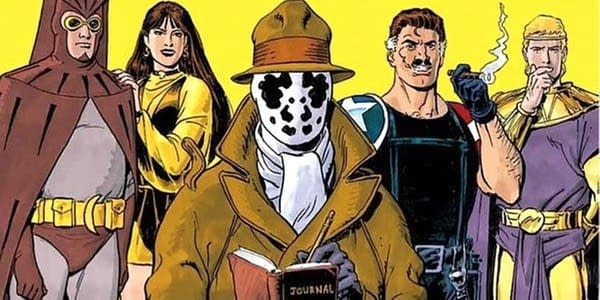 Posting on Backstage, looking for unpaid actors willing to volunteer their time in lockdown, he states “Adapting the unadaptable. Alan Moore was quoted stating his phenomenal work on ‘Watchmen’ could and should never be adapted. Movies and television have tried with varying degrees of success, and while performing over Zoom has its drawbacks, it carries with it equal benefit–Zoom’s panel view. One not dissimilar from Moore’s original intent of telling a story restricted to a 9-panel page. This story is not a flashy, gore and sex filled extravaganza of super heroics. My personal favorite description of Watchmen is, ‘a murder mystery turned global conspiracy, with the backdrop of retired superheroes.’ This story is all about the themes it’s conveying, and next to nothing about the characters driving these themes home. We make no claim of ownership of ‘Watchmen’ or affiliated characters.” Which makes a nice change. :

The last operating vigilante. Highly unstable and uncompromising in his black-and-white viewpoints. Likely hasn’t bathed in months, and stands unnaturally still most of the time. He speaks in a growl, with broken sentence structure. Attempts to destroy what he sees as moral corruption in the heart of New York. Must be a good physical actor, and comfortable wearing a full face mask.
Ethnicity: All Ethnicities

READ  Have you taken down Shadow Midas yet? Or have you become one of his Shadows instead?#Fortnitemares https://t.co/jb8mDQoXAC

Blank expression. Imbued with god-like power after a nuclear accident, he’s grown to no longer care for humanity. After walking across the sun, what allure can human beings have? He never quite looks at people–always looking right through them, as if they were nothing but shadows in the fog. Views past, present, and future all at once, and cares for none of them. Must be okay with wearing blue face paint and a bald cap.
Ethnicity: All Ethnicities

A patriotic government operative who delights in the vice and villainy that his symbolic status allows him. A cruel, large body to fit the excess horrors he deals out to others. Needs someone else to get the joke that morality is a sham and unfettered chaos is the only answer to life’s question.
Ethnicity: All Ethnicities

A retired adventurer desperately missing the old life, unconfident and uncomfortable in his now impotent body. He’s not in terrific shape, and carries himself unconfidently because of this. Desperately searching for another person to validate his nostalgia.
Ethnicity: All Ethnicities

Incessantly bitter. Retired and dismissive of her embarrassing past as essentially a child pageant superhero. She shares both her mother’s thinly veiled nostalgia and something darker, a violent cynicism that she must have gotten from her father. Sarcastic, and laughing in the face of everything she claims to care about.
Ethnicity: All Ethnicities

Trustworthy face. Self made millionaire and world’s smartest man who brands his hero image. The important part of Adrian is that you shouldn’t want him to be the villain, since he seems like the only well put together person out of the watchmen bunch. Appears charming, kind, and truly wants more than anything to save the world.
Ethnicity: All Ethnicities

Laurie’s mother, clinging to a past she refuses to believe is anything but spotless. Older, but still looking like a movie star.
Ethnicity: All Ethnicities

The first masked adventurer. Drowning in nostalgia, with a story for everything. Hollis is an older man who has amazingly kept his form all these years.
Ethnicity: All Ethnicities

A dying “supervillain” of the past. Older, sickly looking, and excessively theatrical.
Ethnicity: All Ethnicities

An absolute nobody journalist working for a conspiracy theory publisher. Complete slob, the lowest of the low in humanity.

New York citizens, prison inmates, etc. Ensemble will be used in most scenes, and some will be used for minor speaking roles if permitted.
Ethnicity: All Ethnicities

Mid-range personality. Political talk show host. Not too bombastic, but not unengaging to watch either. Reports on politics throughout the story.
Ethnicity: All Ethnicities

Whiny rich kid playing around with someone else’s game. One of the four original Minutemen who fails horribly in trying to start a new superhero group. Thinks he looks charming, but really just looks insecure.
Ethnicity: All Ethnicities

Bitter and dying of cancer. Janey was Jon/Doctor Manhattan’s first love, before and (for a short time) after the intrinsic field accident. Working for Ozymandias.
Ethnicity: All Ethnicities

READ  Among Us: Everything to know about the game everyone is obsessing over - CNET

Blind boy who loves comic books. Innocent, and hangs out with a News Vendor for most of the story. More than annoyed that comic issues end without proper resolution.
Ethnicity: Black / African Descent

Tristan states “Rehearses and films Nov. 2020-Jan. 2021 (Tues. and Thurs.) over online Zoom calls.’Watchmen’ will be posted episodically over the course of several months, due to how darn long this story is.” Here are the roles he is recruiting for and what he wants

The undead have something new to fear. Grab the Blade Set before it rotates out of the Shop! https://t.co/YGSUNHuTYy

Fortnite&#039;s First Next-Gen Bundle Is Up For Preorder At Amazon