Mezco Con is almost here and for the preview day, they released their NYCC exclusive, the Bodega Box. Just like SDCC, they release a special swag box, and hidden inside is another one of Mezco Toyz’s original Gomez figures. Hazard Square Gomez is back and unlike his 5 Points counterpart, this one will be a One: 12 Collective figure. The figure is packed with a huge assortment of weapons from an included Hazard Squad weapons pack and unique weapons just for this Gomez. The wrist comm is an exclusive attachment to this figure and will have swappable parts like a grappling gun, zip line hook, and even a HUD projection. Unlike most Gomez figure, this one will have three interchangeable heads that are all the same design. On top of that, there will be a special light-up feature that is a first for the Gomez series. This box does not just include a One: 12 figure but other goodies like a comic book, subway token, 1/12 pizza, mini Rumble Society bat, and more. One of the best things from this box set is that the box of the Hazard Squad Gomez can transform into a display center diorama. This will add plenty of extra playtime for this figure and will be a great addition to your Mezco Toyz One:12 Collective collection.

Mezco Toyz knows how to deliver for their convention and this one is no different. Packed with accessories, goodies, and a truly unique One:12 figure this is a box fans will not want to miss. The Mezco Con 2020: Fall Editi5on Bodega Box is priced at $150. It is limited to 2 per person and pre-orders are already live and can be found located here. Hazard Squad Gomez and the Box are expected to release between December 2020 and January 2021. Get yours before it is too late and reunite the Hazard Squad and save the world once again. 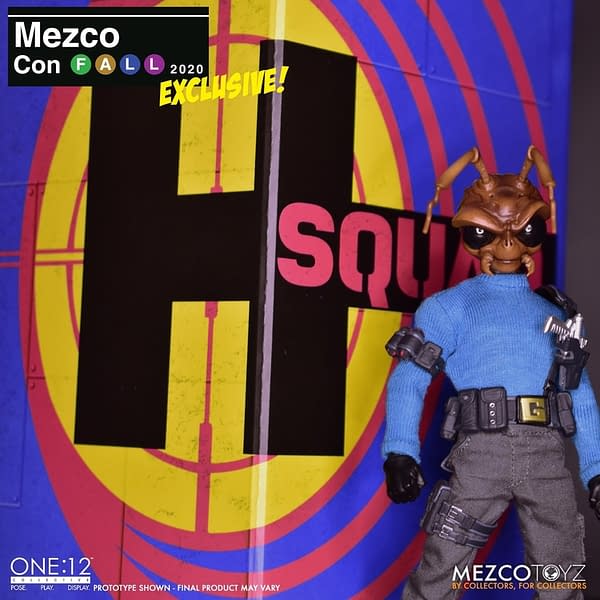 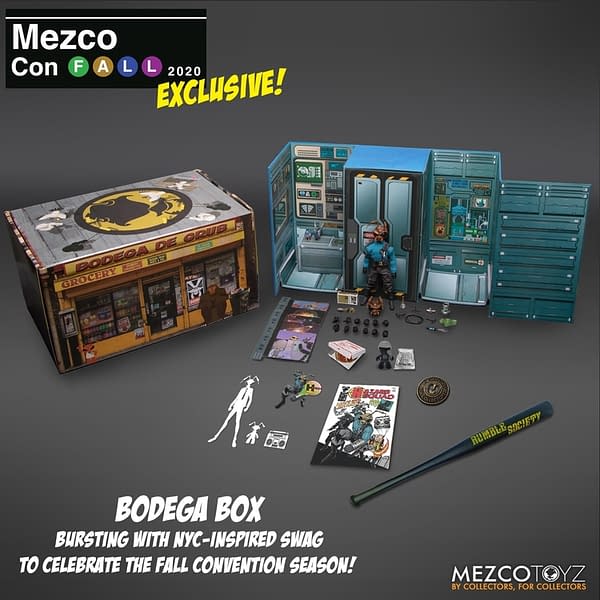 “Mezco Con’s exclusive ‘Bodega Box’ reeks of our home, New York City, more than the East River does in the heat of the summer. Bursting with NYC-inspired graphics, the box itself depicts the gritty, bustling city streets populated with some familiar faces. Inside, you will find a Hazard Squad Commander Gomez complete with the Hazard Squad Command Center – a four-room stronghold packed with features and goodies. Also included is a special weapons pack to arm the Command Center, as well as a Hazard Squad mini comic.”

Hazard Squad is a nostalgic nod to the great toys of yesteryear! But hey, that’s not all you’re gonna get here! Included in the Bodega Box is a wooden Rumble Society mini baseball bat replica, a Stinkle Crew Mez-Itz, a 1:12 scale Pizza Pie from the Sucker Punch Pizzeria, a Mezco Grubway token, a Hazard Squad Commander Gomez sticker, and a Gomez & Friends Window Cling.”

“When the going gets too tough for the tough to get going, there’s only one thing left to do…call in the HAZARD SQUAD! Hazard Squad Commander Gomez comes packaged in the Hazard Squad Command Center – a state-of-the-art science and weapons compound consisting of a Communications and Hazard Watch Control Room, The Void Chamber, a Quantum Dimensional Laboratory, and a Weapons Armory. Build your own weapons rack with the included hooks that attach to the walls of the armory, hook up Boom Boom to the communications console, change out the viewer screen on the Multi-Verse Monitor, and get your next mission instructions in The Void Chamber – all this is included in the Hazard Squad Command Center!

Gomez comes with three head portraits: one with light-up “sight-light” eyes giving him enhanced vision and the ability to signal his squad, a teeth-gritting portrait with a magnet to hold his “3rd Antenna” – a remote correspondence device used to communicate in The Void Chamber, and a standard all-business portrait. Gomez is outfitted in his mission sweater, cargo pants, utility belt with ‘G’ insignia and gun and knife holsters, and mid-calf boots. He wears a shoulder holster to hold his side arm, a removable utility pouch and grenade holster on his bicep, and a utility pouch on his thigh.”

THE ONE:12 COLLECTIVE GOMEZ FIGURE FEATURES:

Each One:12 Collective Gomez – Hazard Squad Commander figure is packaged in a collector friendly box, designed with collectors in mind.

The Minecraft Smash Bros. character does as much mining as fighting

Get two free games worth $35 from Epic this week - CNET