Marvel Infinity Warps Characters Get Their Own from Funko

faIn 2018, Marvel Comics released a story arc called Infinity Wars. The arc showcased another story of the Infinity Stones as heroes and villains get their hands on them once again. While the story is not that memorable, it did give us one fantastic concept in issue #3. Issue #3 dealt with the use of the Mind Stone, which sent multiple heroes to the pocket dimension called Warp World. While heroes were being transported, the Infinity Warps story took place, and these heroes fused together to create mash-up heroes unlike we have ever seen before. These mash-up Marvel heroes show off unique backstories with combined histories of each character, and three of them got their own Funko Pop collectible. The Infinity Warps creations come to life with some brand new Glow-in-the-Dark Pops that are exclusive to Walgreens. We were very excited to get our hands on these, so let’s show them off.

Star-spangled and magical, our first hero arises with the combination of Marvel Comics legends Captain America and Doctor Strange. Soldier Supreme is here to save the world from Nazis and wizards alike, and Funko beautifully sculpts him. He is shown in his combined hero costume with the colors of Captain America but the look of Doctor Strange. In his hands, he is wielding the mystic arts with a spell in his right, and a spell summoned shield in his left. He is shown hovering with magic below him as he wears a stunning mustache that could stop anyone. Iron Hammer comes in next that fuses Iron Man, and Thor is a kickass design. Wearing enhanced armor and wielding his trusty hammer, Iron Hammer is not messing around. His armor is nicely detailed on his body, and the red and silver color scheme is badass. This figure is simplistic but it but with no other collectibles out there like him, he will be a worthy figure for any Marvel or Funko Pop collector. 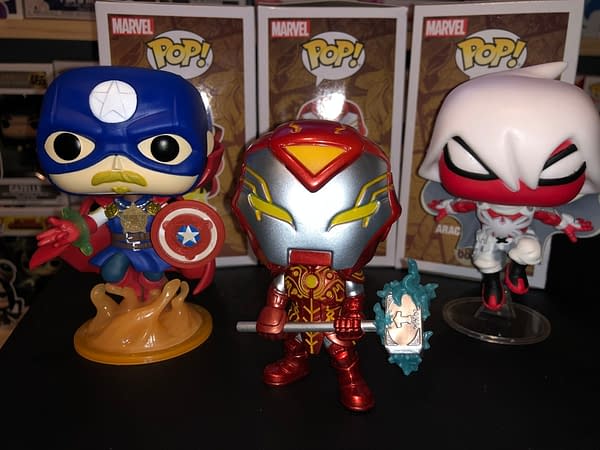 Coming in last is the mysterious Arach-Knight, who is fashioned after Spider-Man and Moon Knight. This one is the strangest of all and my least favorite of the three Infinity Warps Pops. His detail is pretty impressive, with the white and red blending perfectly and the great detail on the suit. His cloak does have a spider on the back, which is pretty cool for a trademark of the hero. Arach-Knight is posed in a jumping position giving fans that trusty spidey pose with the elegance of Moon Knight’s cloak. All of these figures are very well done and were fun to unbox and take a close look at. The Infinity Warps story arc was fun to read, and if you were a fan then these are for you. No one else has captured these fusion figures before so it’s great that Funko is going into the comic world for some great ideas. All of these Infinity Warps Marvel Pops is already out now and exclusively found at Walgreens here.