Captain Toonhead Vs The Punks From Outer Space Announced

Teravision Games revealed their first self-published game this morning with the VR title Captain Toonhead Vs The Punks From Outer Space. The game looks as insane as the title sounds as you will be playing a gun-toting superhero in this FPS Tower Defense adventure title, presented entirely in VR. There’s a lot of crazy enemies but just as crazy weapons as this feels like a 10-year-old’s fever dream of what defending a fort would be. Which makes it totally awesome to us. The game will be coming to Steam, the Oculus Store, and PSVR sometime in the first half of 2021. But no word yet on whether or not the game will work with next-gen consoles yet. You can read more about it below and check out the announcement trailer. 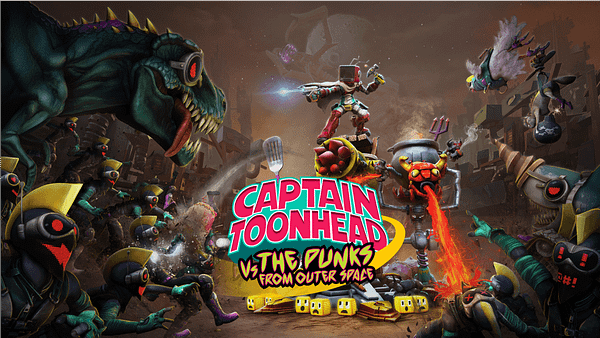 Fight your way through the insane monsters of Captain Toonhead Vs The Punks From Outer Space, courtesy of Teravision Games.

After the entire defense squad sent by the World Treaty for Freedom (WTF) got fried by a burrito-related explosion, the fate of humanity is at stake. Elliot Salazar, the cartoon-obsessed spaceship technician and only survivor, is now Earth’s only hope. Join Elliot and suit up as the heroic Captain Toonhead to save the world from Earth’s last dictator, Nikolas Voorhees, and his devious army of cyberpunk minions. Battle through diverse stages against relentless waves of punks and technologically-enhanced creatures like copter cats, T-Rexes, and merciless cyberchickens. Experiment with Captain Toonhead’s armory of upgradable blasters, an overpowered chancla that never misses its mark, and placeable towers that can be manually controlled for maximum destruction. Combine combat skills and strategy to defend your base and stop punks from stealing Enercubes. Rescued Enercubes can be taken back to Elliot’s ship and be spent on permanent upgrades for weapons, turrets, and bases. Clash, protect, and piñata blitz through outer space to stop Voorhees and save humanity!