Trine 4: The Nightmare Prince Is Getting New Storyline DLC

Modus Games revealed today they are releasing new storyline DLC content later this month for Trine 4: The Nightmare Prince. The new DLC addition will be called Melody of Mystery, and it will be adding an extra six levels to the game that will further expand on the story you already know in the game while also offering totally new content for players to explore. This includes the addition of powerful skills, new puzzles, and a mysterious enchanted slumber for you to unravel. Unfortunately, the team didn’t reveal just when the new content would be coming to the game for PC, only that it would later arrive in March 2021 for all three major consoles. No word on next-gen versions either. You can read more about it below and check out the latest trailer to see the content in action. 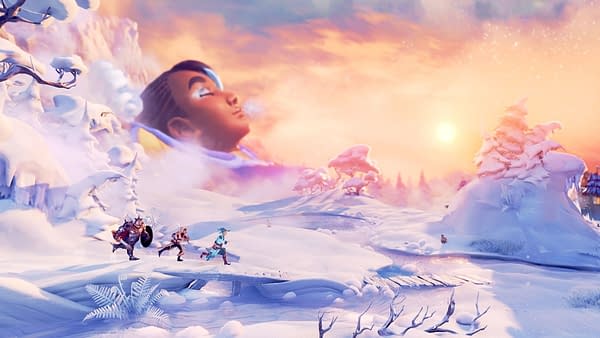 Well, that’s something you don’t see every day in the background. Courtesy of Modus Games.

Melody of Mystery beckons the series’ endearing trio of heroes back to the Astral Academy to investigate an enchanted slumber which has enveloped the academy’s students. With a suspicious and mistakenly freed spirit on the loose, Amadeus, Pontius, and Zoya’s encore journey will lead them through six all-new levels, where they’ll master upgraded abilities while solving fresh puzzles incorporating new elements like sheets of ice, torches, magnets, and crystals. Trine 4: The Nightmare Prince returns the classic side-scrolling platforming series to its roots, smartly shifting its puzzle designs to accommodate solo players or parties of up to four heroes. Players must cleverly combine the distinct abilities of a crafty wizard, hearty knight, and mischievous thief in and out of combat as they explore a fantastical fairytale landscape, dashing to save the world from the troubled Nightmare Prince’s shadowy threats.

TimeSplitters 2 Easter Egg "Just A Joke" According To THQ Nordic