DC Comics and Epic Games are officially releasing the Last Laugh Bundle into Fortnite today as players will bring Joker and more to the fray. The Clown Prince of Crime will finally arrive in the game with this pack along with Poison Ivy and Midas, bringing a bit of Gotham’s evil presence to the island. The bundle was announced back in August and, at the time, no one beyond the parties involved could have foreseen the massive amounts of content we have been seeing since with the company’s interaction with Marvel. So in a very rare circumstance, you can now have a team made up of Marvel and DC villains working together. Or have your own fantasy fight as The Joker takes on Iron Man or Wolverine. Here’s more info on the pack which you can purchase today. 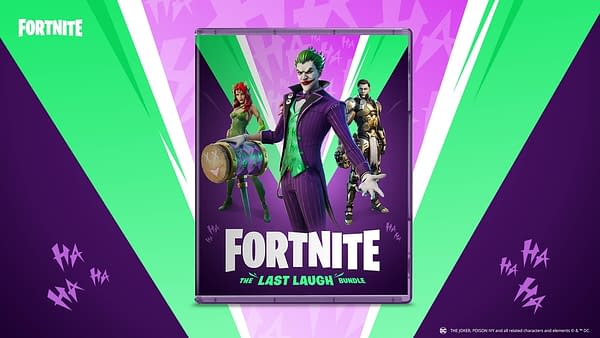 Following the return of Batman, Catwoman, and Harley Quinn to Fortnite, we need to shine the Bat-Signal once again for big news coming this Fall! Batman’s archnemesis, The Joker, arrives in Fortnite via The Last Laugh Bundle releasing on November 17. Check out all of The Joker offerings below including The Joker Outfit, Laugh Riot Back Bling, Bad Joke Pickaxe, The Joker’s Revenge Pickaxe, and the Pick a Card Contrail. A mastermind of chaos, The Joker is joined by adversaries old and new. Gotham City’s floral femme fatale Poison Ivy is ready to plant her roots on the Island, while Midas returns with the new Midas Rex Outfit. The Last Laugh Bundle is available for digital or physical purchase and includes 1,000 V-Bucks. The retail version is available on PlayStation 4, Nintendo Switch, and Xbox One. It will also arrive in time for the release of the PlayStation 5 and Xbox Series X next-generation consoles. For players on mobile and PC platforms, we’ve got you covered.

How to get FREE Venom Outfit, Symbiote Slasher Pickaxe, Built-In Emote & his Back Bling in Fortnite