Galactus Finally Arrives On Fortnite On The 1st of December, 2020

As my youngest has been telling me all day, Galactus is coming to Fortnite islands. It has been set up ever since Fortnite Season 4 went live and all Marvel-ified earlier this year, as the comic books by Donny Cates and Greg Land showed the arrival of Marvel characters in the Fortnite world, with crossovers all over Marvel titles, and the Fortnite game was transformed by Doom’s Domain, Wolverine in the woods, Tony Stark’s Industries on the raised plateau, Stark robots defending the crashed quinjets and Galactus-themed killer robots roaming the plains. But the arrival of Galactus, the world devoured himself, potentially followed by Black Winter, will make this an entirely different game. Apparently. 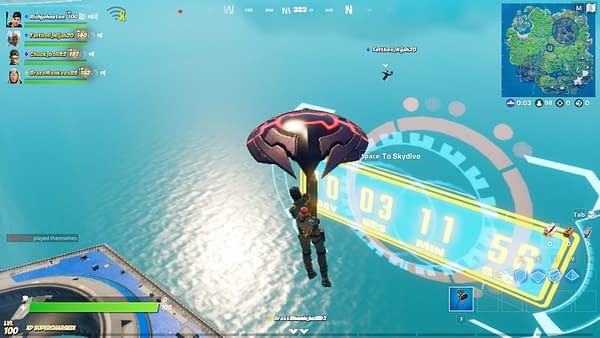 The staging area of Fortnite has a large countdown on display and Epic Games themselves give the following blurb. 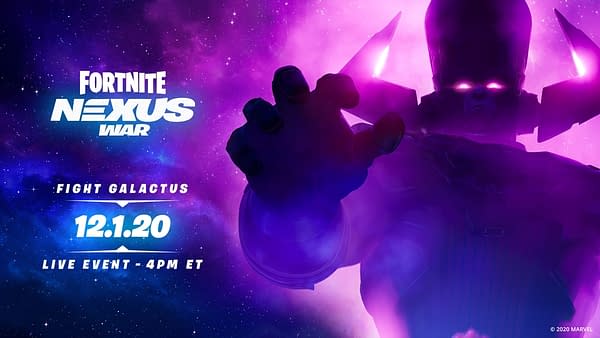 GALACTUS ARRIVES IN FORTNITE! JOIN THE FIGHT ON DECEMBER 1

Uhhh… is that the Devourer of Worlds on the horizon? That’s not good!

It was only a matter of time. Galactus is closing in on the Island and the fate of all Reality lies in the balance. Join the ultimate fight against Galactus in the one-time only Nexus War finale event on Tuesday, December 1 at 4 PM ET.

With everything in the balance, this is an event you don’t want to miss. To prepare for Galactus, we recommend taking the following steps:

DOWNLOAD THE LATEST UPDATE
If you haven’t already downloaded the 14.60 update, load the game on your preferred device and download today.

DOWNLOAD HOUSEPARTY
Fortnite’s new integration with Houseparty means you can have live video chat in Fortnite (PC, PS4/PS5) while attending the event.

ATTENTION CONTENT CREATORS
Here are some helpful tips for content creators to have the best possible experience.

Review the Fortnite Content Guidelines.
We’re working with partners to ensure that content creators can share this unforgettable event with their communities. We’ll be updating this post with added details regarding copyright claims prior to the event. Stay tuned.
For content on other platforms, refer to your channel’s platform policies for tips on how to avoid copyright strikes.
Replays will not be available at the conclusion of the event. To share your experience with other players, capture the event locally or via streaming.

Galactus, created by Jack Kirby with Stan Lee for the Fantastic Four was, basically, a god. Who travels from world to world, to devour their energy, killing all life as he does so. It is pretty much only the Fantastic Four who have been able to hold him back, In the time that Fortnite x Marvel: The Legacy War is set, Thor is playing the role of his herald rather than the Silver Surfer, hence his variant design in the game…