Having a great headset is crucial to an immersive gaming experience. Modern headsets have surround sound so you can hear the direction of footsteps and gunshots to give you the edge. They also have crisp, clear sound and are perfect for movies and music.

Most gaming headsets also have microphones to communicate with your team in real-time and strategize on the move. The microphone should filter out background noise, and it’s an advantage if it can be removed or folded to keep it out of the way when you don’t need it.

Headsets come in different shapes and colors, so you can easily get one that stands out from the crowd and compliments your style. Here are some of the best pink gaming headsets. 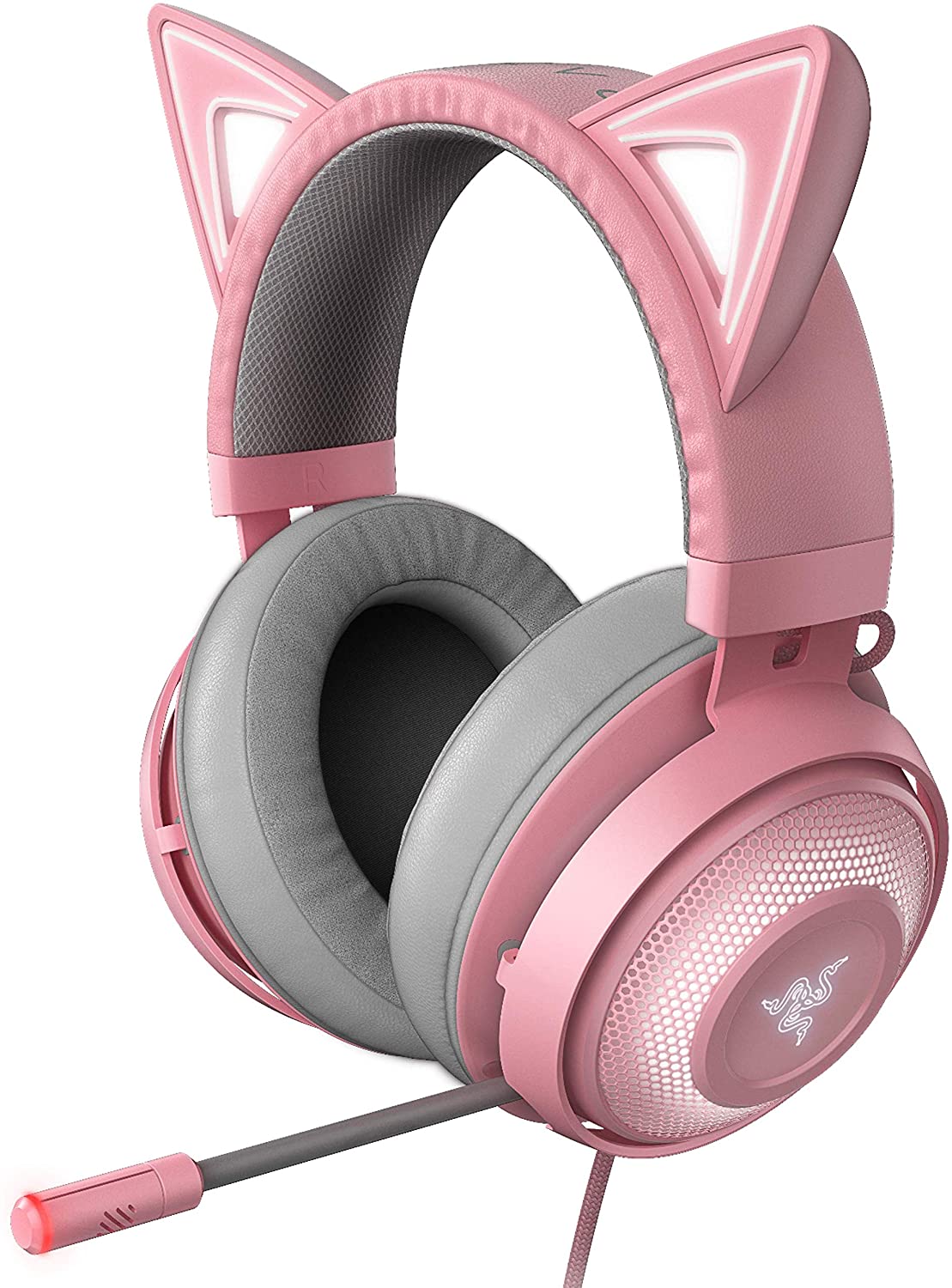 The regular Kraken is already legendary, but the Kraken Kitty takes things a step further by coming in pink and adding cute cat ears with addressable RGB lighting. The cat ears have triangular-shaped LEDs that light up and they can sync with your gaming case or mouse using the Chroma app. You can even configure each ear to display a different color.

The Kraken Kitty isn’t just about looks. It has incredible sound quality with THX 7.1 surround sound and a noise-canceling mic. Gamers will appreciate that the mic is fully retractable and can be stored in the earcup when not in use. The Kraken is the best pink gaming headset you can get, but it doesn’t come cheap. 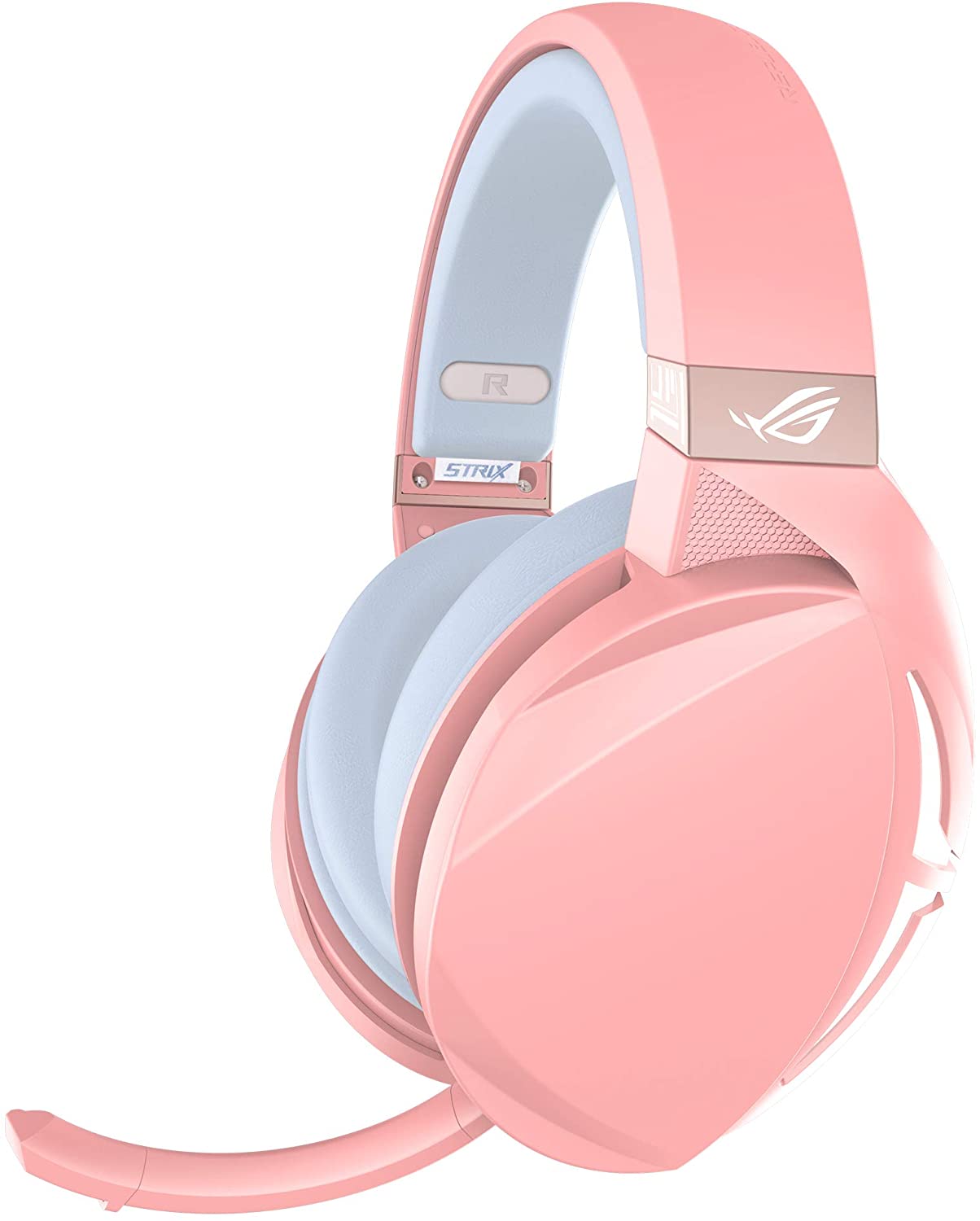 The Asus ROG Strix Fusion 300 PNK is another tremendous-looking pink headset with performance to match. This headset has large, comfortable ear cushions with soft padding, and they are hinged so you can adjust them for a perfect fit. The virtual 7.1 surround sound is fantastic, and it’s a pleasure playing Dota 2 and Genshin Impact. Just like on the Kraken, the microphone can be retracted when not in use.

Another neat feature of the Fusion 300 PNK is that it can work on any platform. It comes with a USB adapter for PCs, and there’s also a 3.5mm connector for consoles. Asus has released a matching pink keyboard, mouse, and mouse pad so you can have a pink theme running through all your peripherals if you like. 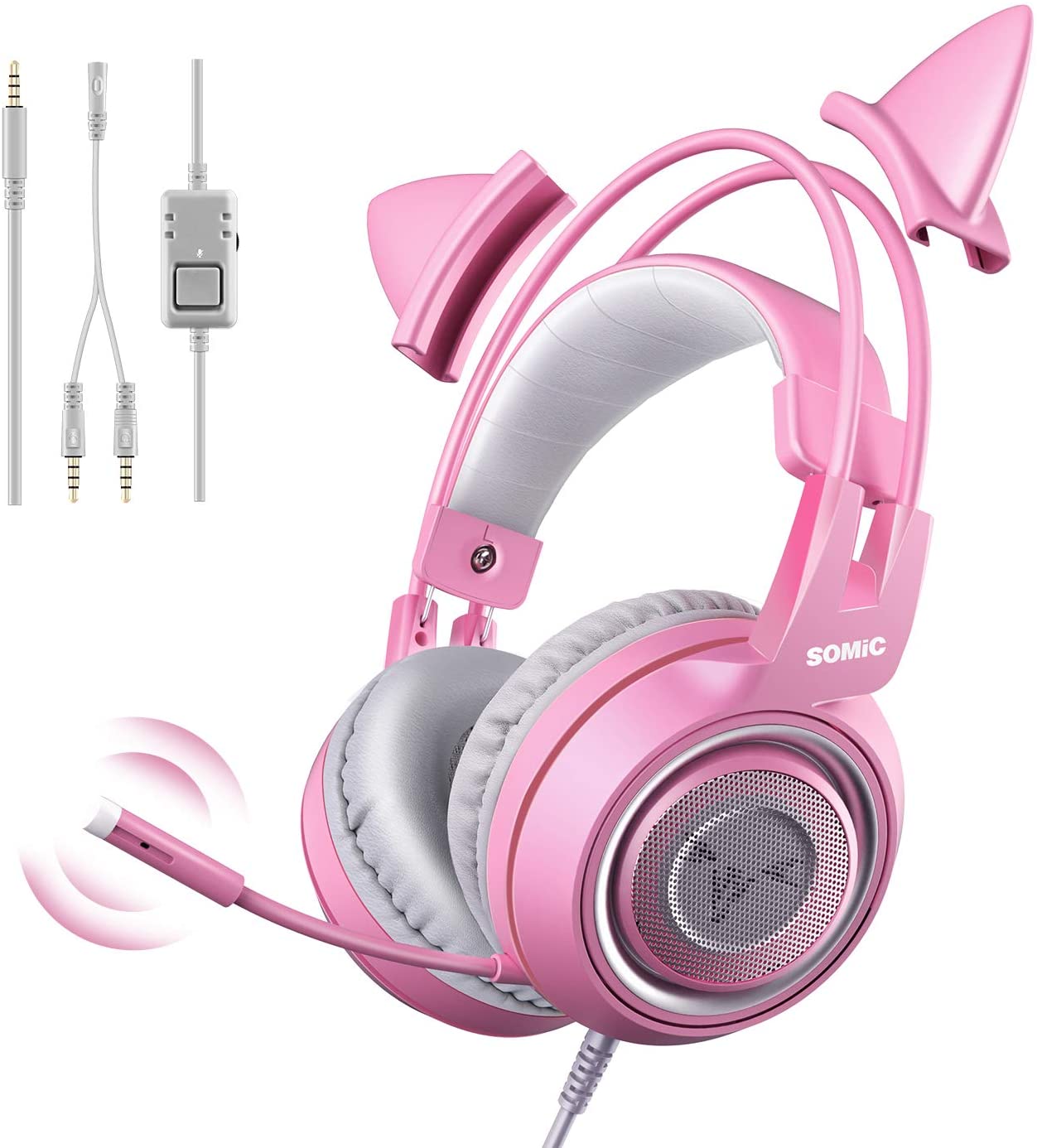 The Somic G95s is quite affordable but still has impressive sound quality. This headset comes in a glossy pink color with thick padding and an adjustable headband. Completing the look is an LED logo on the outer ear cups and detachable cat ears. The volume, microphone, and LED switch sit on the right ear cup for easy access, and there’s even a vibrate function you don’t get on many rivals.

This headset has virtual 7.1 surround sound, and while it’s not the loudest, you can hear the distinct sound of every gun in Apex Legends. The noise-canceling mic isn’t retractable, but it’s still clear and loud. The Somic G95s offers exceptional value, and there’s also a cheaper version with stereo sound only. 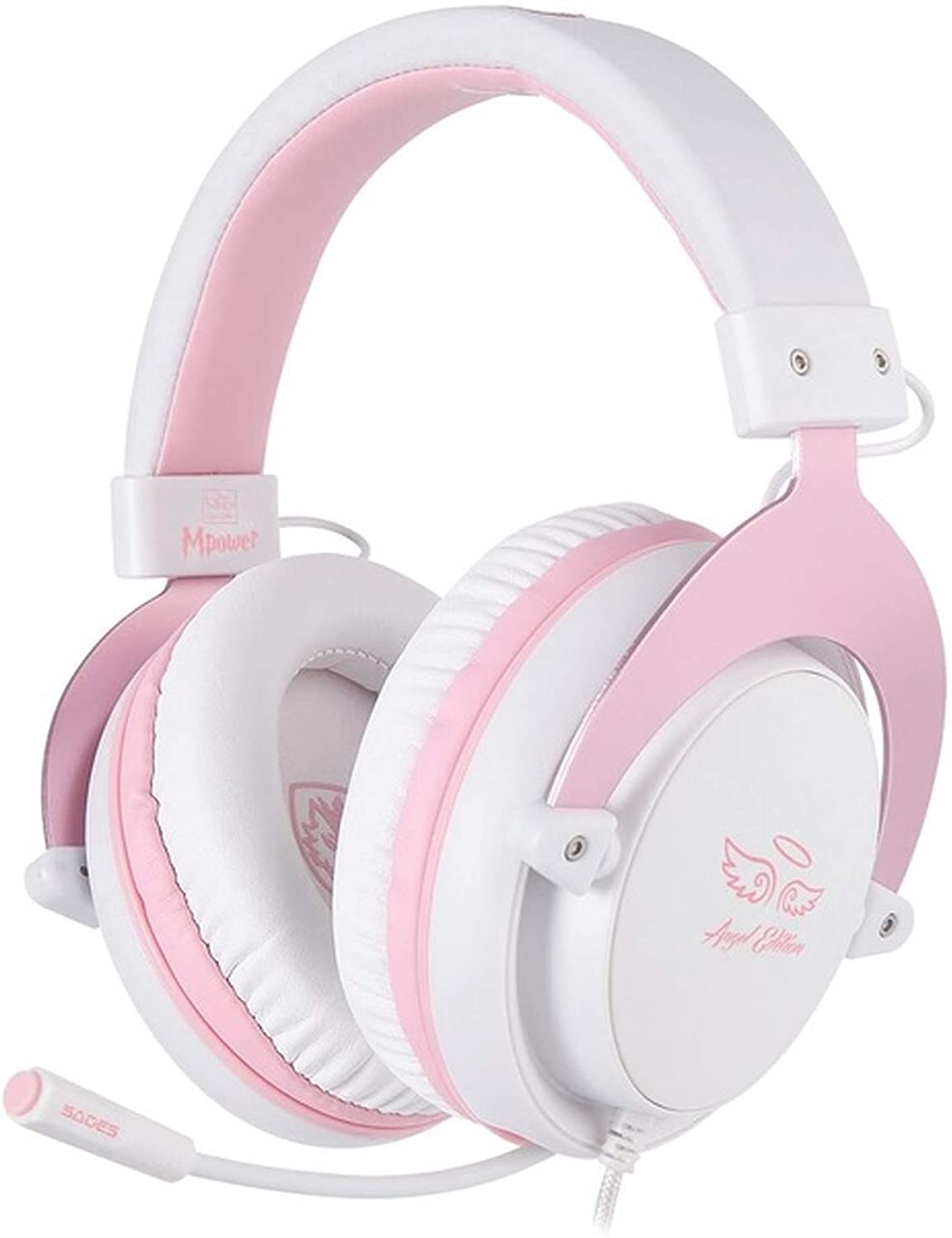 The Sades Mpower Headset is worth a look if you want a stylish pink headset that doesn’t cost much. This headset features a mix of white and pink coloring, and the contrast is quite attractive. Despite the low price, it’s strong comfortable with thick padding. The microphone is retractable and is surprisingly clear for this price point.

There’s no 7.1 surround sound, but the Sades Mpower still performs admirably, delivering clear stereo sound. The bass isn’t overpowering, and explosions in Call of Duty are loud and vivid. The Sades Mpower also keeps things simple by having a standard 3.5mm cable to fit most devices. This no-frills headset does what it’s supposed to without any advanced features. 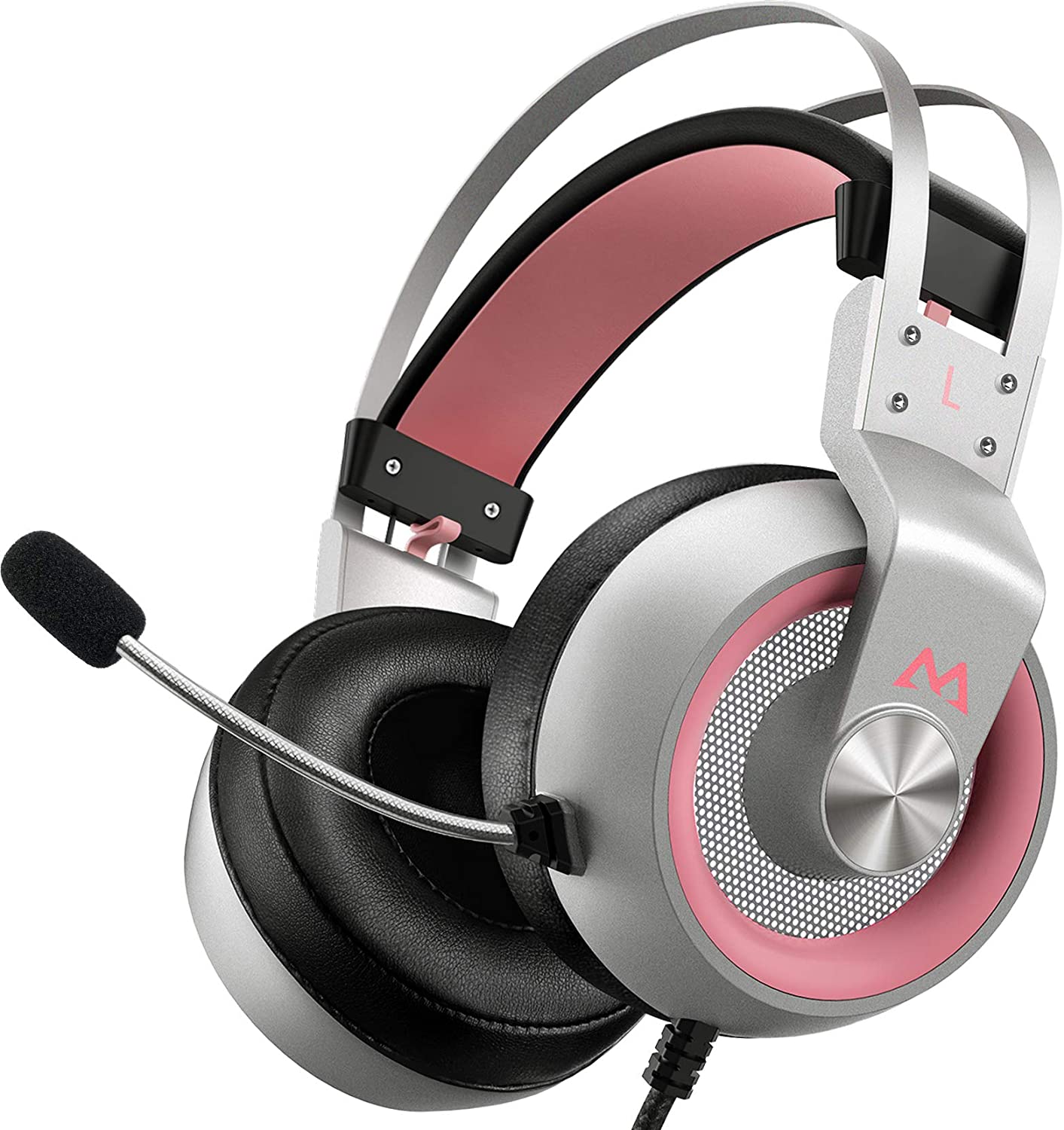 The Mpow EG3 Pro is another surprisingly durable budget headset. It doesn’t go overboard with pink and instead uses it to accentuate the metallic headband and black padding. The result is an eye-catching headset with a heavy-duty look. This headset has a sturdy metal headband with a smaller adjustable one underneath. It uses soft foam padding for the ear cushions, but it’s a bit thin compared to the others on this list.

There’s an inline mic and volume control with a second volume control on the ear cup. The Mpow EG3 Pro doesn’t have surround sound, but the stereo sound is clear with no distortion or crackling. You can rotate the mic 360-degrees, but it’s not retractable. This headset has fantastic value and is a worthwhile option if you won’t need advanced features. 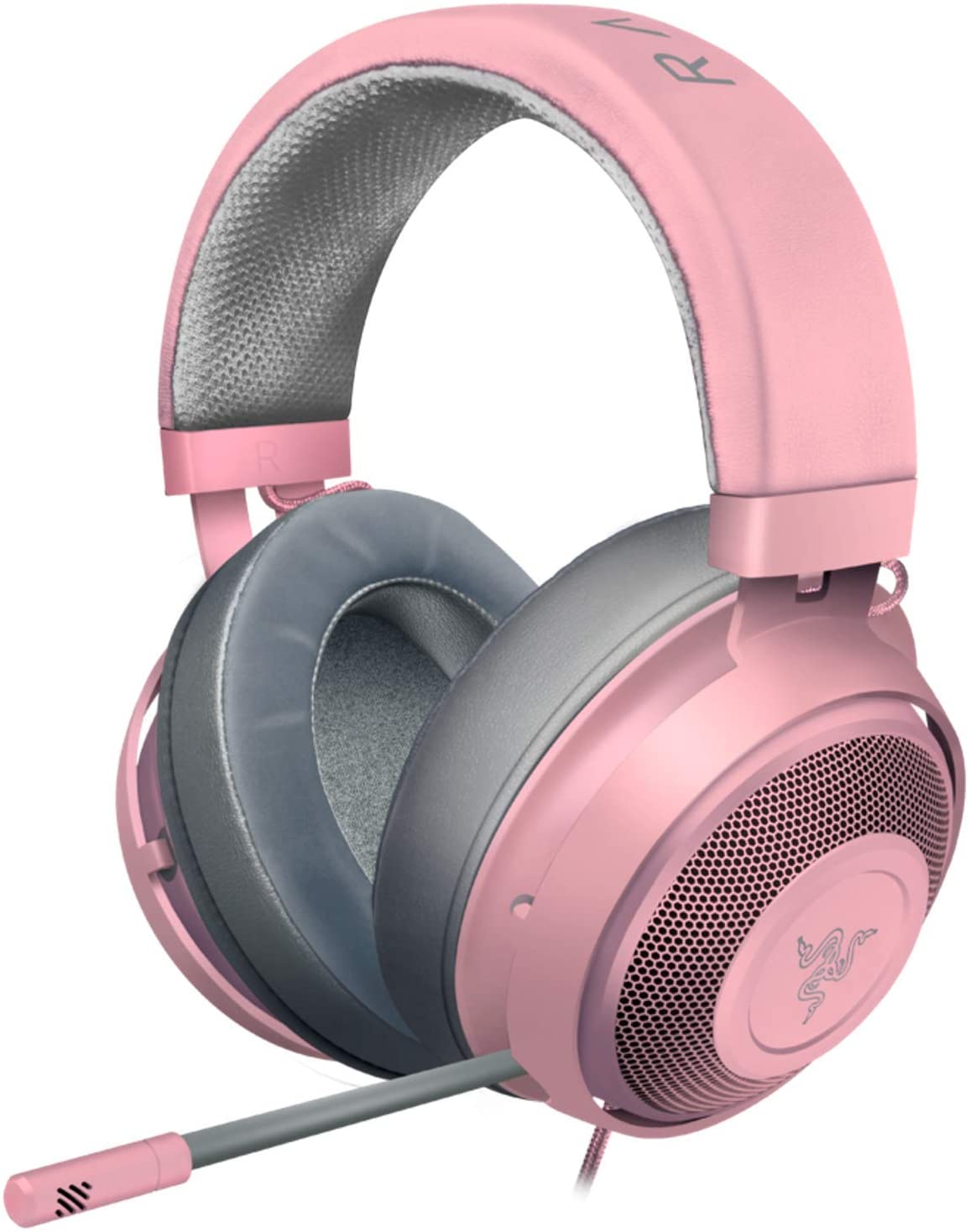 The regular Razer Kraken Quartz is much cheaper than the Kitty edition but has the same high-quality design and sound quality. It still comes in pink, and the main difference is the lack of RGB cat ears. It won’t be a big deal for some people because of the cost savings, and you still get plastic detachable ears. All the other features, like software-enabled 7.1 surround sound and RGB logo, are still there. It also has ear cushions filled with cooling gel to keep you comfortable during long Fortnite sessions.

Razer also has a matching pink keyboard, mouse, and speakers in its lineup so you can have matching equipment. You can’t go wrong with the Razer Kraken in any iteration, and it’s always a brilliant choice for gaming. 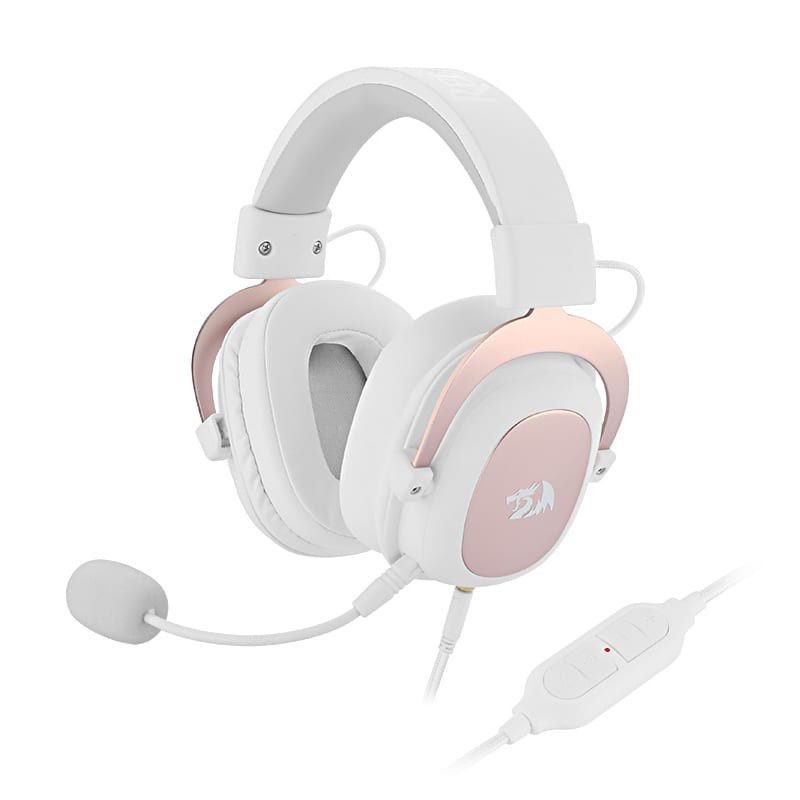 The Redragon H510 Zeus White has an outstanding balance between price and performance. It’s predominantly white with a pink frame and pink panels on the ear cups. This headset is versatile and can work with either USB or a 3.5mm jack. It even comes with a USB-A to 3.5mm adapter with inline controls for the volume, mic, and mute function. Another excellent feature is the detachable mic that can be removed and stored separately if you don’t need it.

The H510 Zeus White has a comfortable fit with swiveling ear cups and thick 2.5mm cushioning. It comes with 7.1 surround sound, and you can change the equalizer setting to your taste using the Redragon app. This headset has everything you need at a reasonable price.

Gear up with #SavetheWorld&#039;s newest Vindertech Hero, Powerhouse! Included in the Pack: -Access to Save the World -Powerhouse Hero and Back Bling -Lectro Shock Weapon Schematic -Powerhouse Challenges with up to 1,000 V-Bucks and more in rewards. https://t.co/IIMp0ghg6v