DC Comics To Kill Off Billy Batson? All Part Of Future State…

Yesterday, Bleeding Cool listed a bunch of titles being collection by DC Comics alongside the release of the upcoming Suicide Squad movie. One of which was for the Future State: Suicide Squad which listed a number of Future State titles with some brand new information. 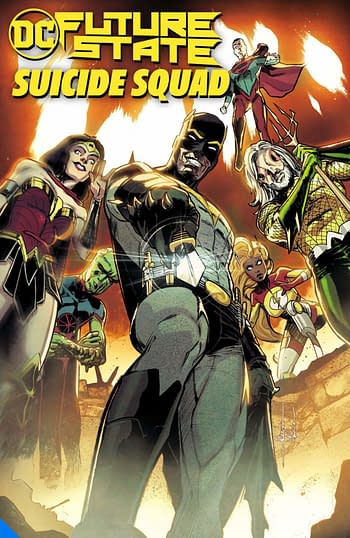 Such as the Shazam title which, in DC’s solicitations is described thus, for #1 and #2.

No one’s seen Billy Batson in years—not since the incident known as the Final Battle of Titans Island. Now leading a small band of heroes, even his allies have begun to ask who’s controlling Earth’s Mightiest Mortal. In a story set years after the events of Future State: Teen Titans, learn the truth behind the sacrifice Billy made to imprison an ultimate evil even he couldn’t destroy.

Shazam’s soul is laid bare as he’s confronted by one of the most powerful beings in the DC Universe! Revealing shocking secrets and the final fate of Billy Batson, the boy who was Earth’s Mightiest Mortal, this issue introduces a deadly new threat born from the ashes of the Teen Titans Academy: Raven!

In a world devoid of superheroes and ravaged by extinction, the stakes are high, dire consequences are imminent, and several questions remain unanswered. Billy Batson made a deal with the devil and has to uncover who is now controlling the Mightiest Mortal’s power to wreak havoc.

There are titles for other books too. Future State: Teen Titans #1-2 is originally described thus;

Red X returns to the Teen Titans! The mysterious former Teen Titans Academy student joins the surviving Titans in a final fight to stop the threat unleashed by one of the school’s students. Nightwing, Raven, Crush, Shazam, Starfire, Cybeast, and Red Arrow face their demons as one of these heroes must make the ultimate sacrifice to save their world!

It is now Future State: Teen Titans: Dead of the Class #1-2 and described;

As for Future State: Swamp Thing #1-2

From the ashes of a terrible war, life blooms anew in Swamp Thing’s image. The remnants of humanity lie in hiding, forever in the shadow of the green god who now rules the planet. When the new avatar of the Green uncovers a stray human, a rebellion is revealed! But this Swamp Thing is no stranger to violent ends, and neither are his creations. If it’s war humanity wants, it will be at their doorstep—and Swamp Thing will never be the same!

Humanity strikes back! The shadow of Swamp Thing Supreme stretches across the globe as it has for centuries. The world is at peace, until a rebellious faction of humanity ignites their terrible plan, fueled by Woodrue Wilson’s appetite for power. But Swamp Thing, too, harbors a secret—one he must reveal in order to restore peace to the planet once again. But it will cost him everything he has.

Swamp Thing made a treacherous choice in the past that may doom his future.

The Suicide Squad enters the Future State era as Amanda Waller uses Task Force X to save the world and remake it in her image—but what happens when the team shows up to stop her?

Peacemaker attacks! Assigned to bring Amanda Waller back to Earth-1 at all costs, the Suicide Squad battles Waller’s private Justice League on Earth-3. As lives are lost and blood is spilled, the fate of the Multiverse will be decided by Superman!

And now, looks like she’s gone further than the world.

Questions remain after Amanda Waller and her Justice Squad instill peace in the future of the DC Universe.