Yesterday, Bleeding Cool reported on the controversy surrounding the Spanish version of Supernatural episode “Despair” in which Castiel’s (Misha Collins) declaration of love to Dean (Jensen Ackles) was met with the response, “And I you, Cas” (as opposed to the U.S. version: “Don’t do this, Cas”). Accusations of corporate pressure along with arguments that the way the entire Castiel/Dean wrap-up was handled fed into the “bury your gays’ trope began making their across social media, so much so that Collins called a meeting of the SPN Family on Instagram to express his thoughts and put some rumors to rest. 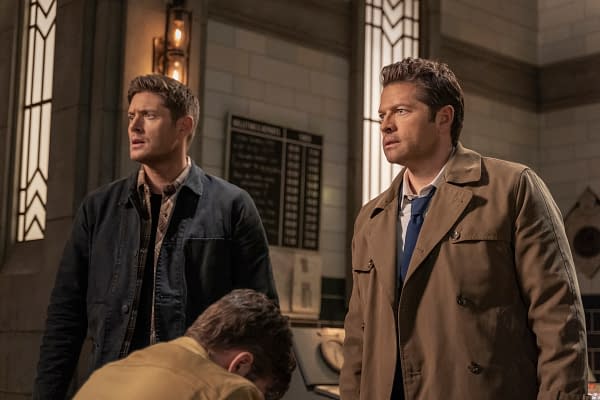 Over the course of the clip (which you can check out below, followed by a transcript), Collins says there was “no conspiracy” on anyone’s part “to minimize or erase” LGBTQ representation, and that there was no alternate ending to the episode. Collins believes that Dean was “too stunned in the moment” to offer a proper response, and that the words contained in the Spanish version were the result of a “rogue translator” going with a personal interpretation. As for the “bury your gays” accusation, Collins pushed back by saying that Castiel’s declaration of love not only proved powerful enough to save Dean, and by extension all of humanity. Also, he points to Dean’s trip to “new Heaven” in the series finale as another sign that the top tag doesn’t apply: not only is Castiel still alive, he helped Jack (Alexander Calvert) rebuild Heaven.

“I’m seeing a lot of commentary on the ending of SPN & the recent Spanish dub, and disheartened to see there are a lot of misconceptions that are making many in our family feel unheard & unsupported, so I’m calling a #SPNFamilyMeeting to sort a few things out for the record:

There was no conspiracy within the network, staff, or cast of SPN to minimize or erase representation from the narrative & there was no alternate ending to 1518. Dean was always too stunned in the moment to reply. (Apparently a rogue translator penned their own dialogue.)

Also, in my opinion Cas doesn’t play into the “bury your gays” trope. His declaration of love saves Dean, enabling Sam and Dean to save all of humanity. And Cas doesn’t die! He actually goes on to rebuild Heaven!

Was the show perfect? No. Could Cas’ departure have had more resonance in the final episodes? Sure. But I’m confident you guys can sort that part out as your writing and art and imaginations play the story out past the last frames we filmed.

And I’m especially proud that my character’s parting message was, “expressing your true self, letting yourself love who you truly want to love, openly & honestly, can literally save the world… & in the end, good things do happen — & they’re worth fighting for.” I love you all.”

“Supernatural” Cast on The Journey Coming to An End

Though news of the series’ was announced in March 2019 (with Collins via Instagram post, which you check out below), Ackles and Padalecki did their part to get viewers through the grieving process a month later, taking the stage at VegasCon 2019 to explain that the decision to end the series was a “community decision” and not influenced by the network or the studio. In the video below, Ackles wanted the crowd to know that the decision was one they had discussed for quite some time now, saying, “It wasn’t an easy decision. It was months and months, if not years, of discussion between he and I, between the rest of the cast, between the crew, between our writers, between our producers, between the studio, between the network. Nobody wanted to see this show fizzle out.”

For the Supernatural team, it was a matter of knowing when the right time was to leave. Ackles says it was important to find that right balance between not staying around too long and giving yourself enough time to tell the story that fans deserve: “I think that it was everyone wanting to do the biggest service to the show that we could by going out strong. It just seemed like the writing was kind of on the wall as to when that was happening. Everybody kind of felt that it was coming soon, and so it was just taking that leap of faith of going like, ‘Well guys, let’s get out the paint and paint that finish line because what we’ve accomplished is unlike any other.'”

How to activate crossplay on Rainbow Six Siege

Mudrunner&#039;s filthy motoring is free on the Epic Games Store this week