As Bleeding Cool told you last year, in the world of the DC Future State, that Jason Todd is working with the Magistrate – taking down masks like Vigilante and involved with Ravager, Rose Wilson, daughter of Deathstroke. That Nightwing was placed in Arkham Asylum on “A-Day” but escaped, is leading a Resistance against the Magistrate. And that after hanging up her mask, Stephanie Brown returns as Spoiler – but is later believed to have betrayed the Batfamily to the Magistrate. Oh and that Darcy of We Are Robin is working at Gotham Customs. How much of that has come to fruition today? Some, not all, let’s check in with Future State: Robin Eternal from DC Comics. 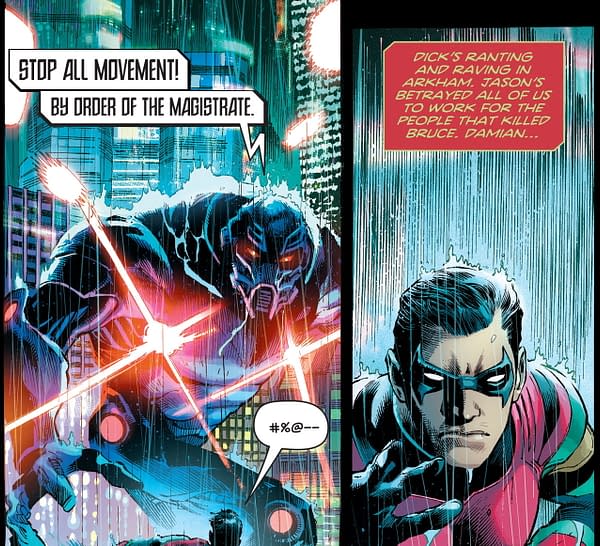 Dick in Arkham, no news on Damian, Jason Todd is the great betrayer. As for Stephanie Brown, Spoiler? 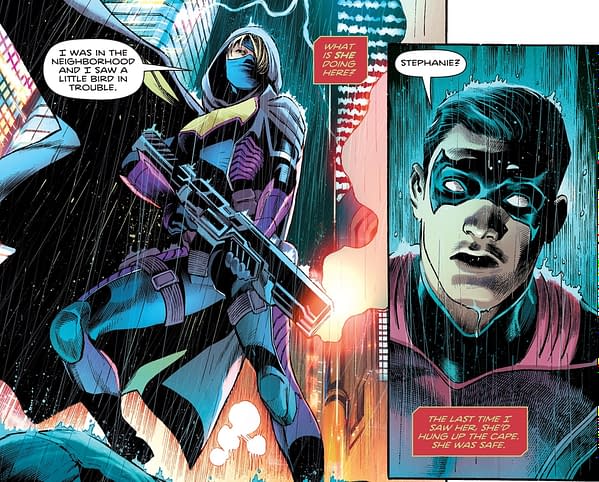 Not betraying anyone… yet. But, yes, there is word on whatever happened to Darcy from We Are Robin. And she just may be Jason Todd’s way in to dealing with The Magistrate.

But given that Tim Fox, The Next Batman, is meant to save Gotham, it’s not so hot for Nightwing over in today’s Future State: Teen Titans – when you let him use that word. Still, at least he’s not in Arkham any more… but how so?

FUTURE STATE TEEN TITANS #1 (OF 2) CVR A RAFA SANDOVAL
(W) Tim Sheridan (A/CA) Rafa Sandoval
When the original New Teen Titans formed a school to mentor and train young heroes, they wanted to help save the world. Years later, Titans Tower is a monument to a graveyard of pupils lost in a terrible battle. Returning to the site of their greatest failure, Nightwing, Starfire, Beast Boy, and Cyborg join Raven to plot a course to face off against the evil that destroyed their team and school. Loyalties are questioned and motives are suspect as the former teen heroes must turn to the mysterious Red X—a former student—for help. Don’t miss the first comics appearance of this Red X, previously seen only in the hit animated TV series Teen Titans Go! This title is fully returnable at a later date.
Retail: $3.99

FUTURE STATE ROBIN ETERNAL #1 (OF 2) CVR A EMANUELA LUPACCHINO & IRVIN RODRIGUEZ
(W) Meghan Fitzmartin (A) Eddy Barrows (CA) Emanuela Lupacchino – Irvin Rodriguez
Lazarus Resin is on its way to Gotham City, and the Magistrate intends to use this regenerative super drug to make its forces immortal! That is, unless Tim Drake has anything to say about it! Join the ultimate heist at 20,000 feet as Robin and Spoiler hijack the sky convoy that could mean the end of freedom in Gotham forever—if the emotional baggage between Tim and Stephanie doesn’t do them in first! It’s the fist-flying, sky-diving, robot smashing, fascist-punching adventure that you cannot miss—from rising star writer Meghan Fitzmartin (Supernatural) and top artist Eddy Barrows (Detective Comics)! This title is fully returnable at a later date. Retail: $3.99

How to get FREE TheGrefg Skin, Pickaxe, Emote TheGrefg Floor is Lava Tournament Details in Fortnite