There’s been a lot of buzz around BBC America’s new series, The Watch, and sadly most critics immediately write it off as bad. But I’m here to make a case for it, and not because I’m a fantasy TV nerd, but because I am a fan of television and it’s my job to give every show a fair chance. Most of the reviews focus on comparing it to its source material, the “Discworld” series of books from Sir Terry Pratchett.

The Watch books are great…but adapting any highly visual (and rather conceptual at times) story is going to turn out wildly different from the source material, simply because of the inherent problems specific to it. For example, take the 2007 adaptation of The Hogfather – the Tooth Fairy’s castle and the land it resides in were described so abstractly and vaguely it makes cementing a single version of it a divisive matter. And that’s where I differ from other critics in this matter: I’m judging The Watch independently, without comparison to the source material. Is it different? Yes. Is that a good thing in this case? Also yes! 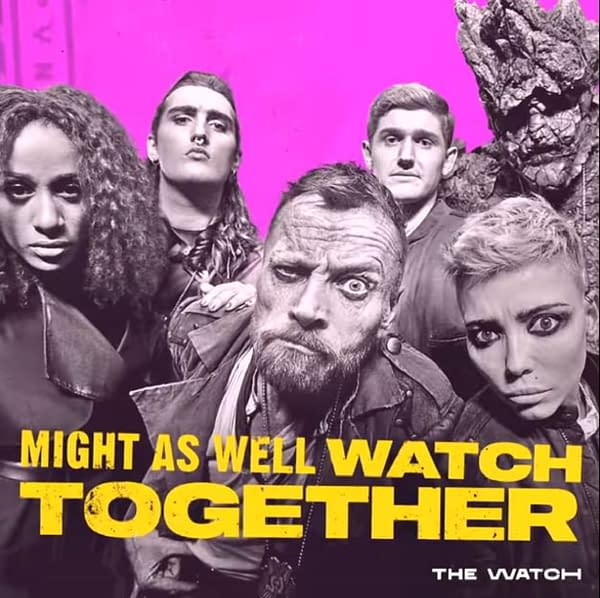 Honestly, that’s what you have to do with basically any interpretation of novels like that that make their own highly visual world. The characters are going to be so very unique to each person because that’s how the books are designed to be read; that makes it so there’s no pleasing everyone (or nearly anyone in this case) with bringing the world and characters to life. In writing school, I took a class about adaptation; the main thing it taught us is that the heart of any adaptation lies in the spirit of the story, characters, and overall world. The plot points and characters don’t even have to be the same (see: The Walking Dead), but the real mark of a successful adaptation is whether or not it captures the same emotions as the original story.

That is what an adaptation should be judged on as it pertains to the original. Nothing else – not casting, not tiny details, but an overall feeling. Does this story elicit the same feelings? If the answer is yes, then it’s a successful adaptation. No, The Watch may not wear armor, but a reminder: versions before BBC America’s version were developed, we’ve seen stills from versions in which they did, and honestly? If nothing got released before now, there’s probably a good reason beyond, “they got the costumes just like the book”. Yes, the characters may be a bit different, and the world may not be exactly how you pictured it, but Sam Vines is a grumpy curmudgeon who believes in bacon sandwiches and a good pair of boots and not doing any work unless absolutely forced to. And I absolutely adore Cheery and Angua and even constable Carrot – they’re all doing a fantastic job of making me love and feel for those characters.

Carrot is sweet, naive, and always tries to do the right thing; Angua is all twisted up inside about the morality of who she is and turns it inward; Cheery is the opposite and buries her insecurities behind a lovable facade, and Vimes drowns any feelings that may possibly be skulking around with booze. These dynamic characters comprise The Watch, an antiquated organization trying to save the world whilst not running afoul of the guilds. Oh – and did I mention they make a pretty dope-ass punk band?

So it may be Brooklyn 99 set in the world of Game of Thrones, but it’s still satirical. Being a visual medium, television and film can be more subtle with their points as opposed to the solely written word. The tone is similar to that of Dirk Gentley’s Holistic Detective Agency – another BBC America program, which sadly never got a proper ending. It’s witty, hilariously deadpan, and full of absolute absurdity…but mostly believable absurd shenanigans within the context of the show’s world. Everything in the show, down to every little character nuance and set dressing, feels like it’s completely natural and creates a complete world of Ankh Morpork.

At the end of the day, you must be really fun at parties if an adaptation spends near a decade in development, then decide for completely fickle reasons that you just can’t get into the show because it’s different from the book. It is inspired by the characters and original novels – if you simply want the book acted out for you, I suggest a good children’s theater. Perhaps the fine thespians of Mitchell Brook Primary School could accommodate your request?

In the meantime, I suggest giving the show another chance with an open mind, letting go of any cynicism and not allowing yourself to say, “that’s not the right way to tell this story!” The truth of the matter is, there is no one right way to tell a story – even the same story you know and love. And who knows? It could actually turn out to be good and witty and interesting.

Having spent far too much time in front of the television growing up, Eden has lots of opinions about television (as well as movies and everything else). She puts this to good use along with her journalism degree and writing experience with by-lines over the years in many print publications, books, and online media outlets. You can find her on Twitter at @Edenhasopinions