Why Can&#039;t Justice League Kiss Each Other In DC Future State?

Today sees the launch of the new Future State: Justice League #1, combining all the future versions of the Justice Leaguers – who once upon a time when this was known as 5G would have been the Justice League going forward. And we get to see where they are all at in their respective timelines. 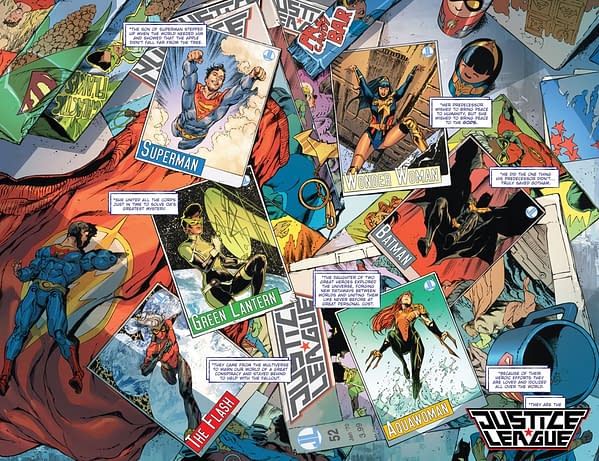 Previously, Bleeding Cool had stated “The original Justice League team got too big, brought in too many members, and so one betrayed them and spilt their secrets.” and that “Future versions of the Justice League maintain mandatory secret identities and no fraternisation between members.” But we also stated that “Yara Flor, Wonder Woman declare she will no longer be part of the Justice League while it is still associated with the United Planets. Stuff went down.” How do the two align? It seems, by being set in different times.

In Justice League, we learn of a great betrayal. No, not Stephanie Brown, that’s another (still unpublished) book. 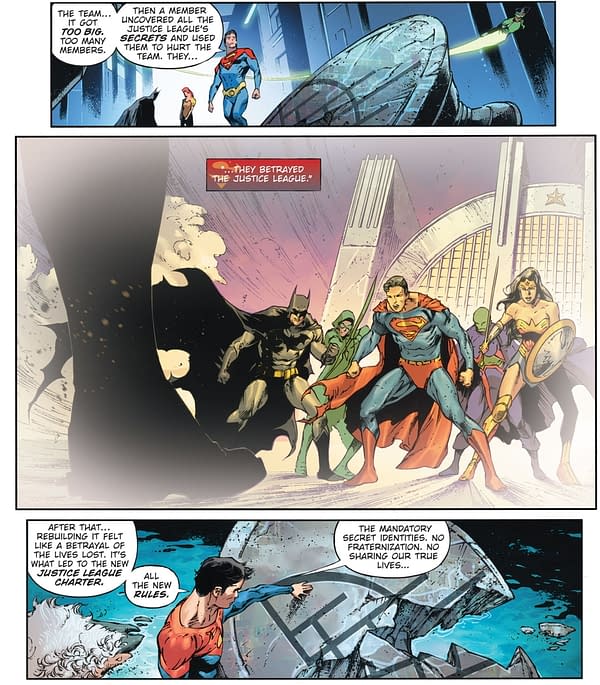 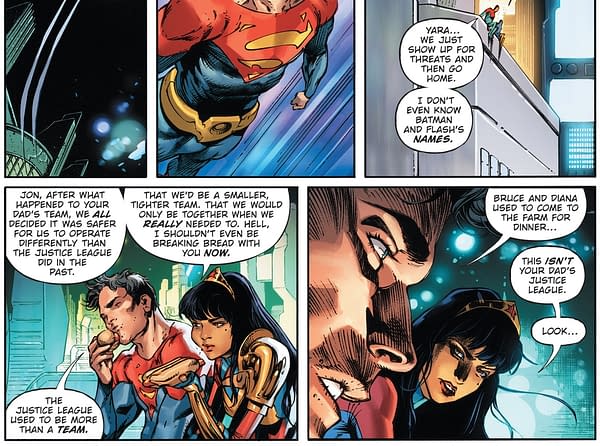 Of course, we do… 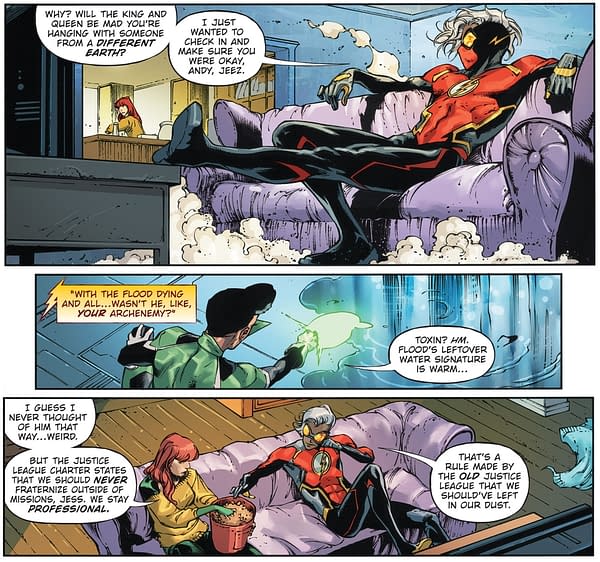 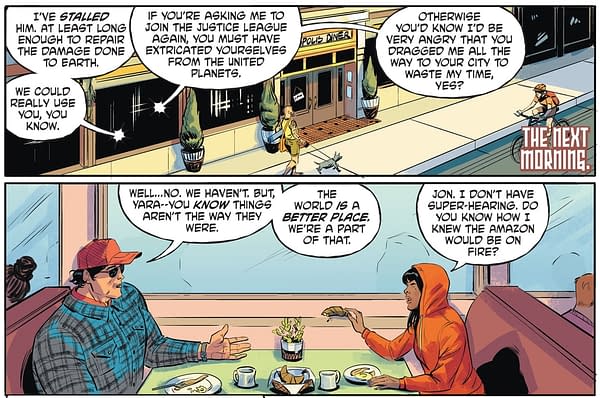 FUTURE STATE JUSTICE LEAGUE #1 (OF 2) CVR A DAN MORA
(W) Joshua Williamson – Ram V (A) Robson Rocha – Daniel Henriques – Marcio Takara (CA) Dan Mora
Witness the start of a new era for the Justice League starring Jonathan Kent as Superman, Yara Flor as Wonder Woman, Jo Mullein as Green Lantern, Andy Curry as Aquawoman, a new Flash from the Multiverse, and [REDACTED] as Batman! Together, they protect the future, yet apart, their identities are secret even from one another—but why? When their greatest adversaries wind up murdered in an abandoned Hall of Justice, all clues point to…the Justice League! The new team’s adventures begin here! And in a new tale of the Justice League Dark, a witch hunt across the DC Universe begins as magic users are harvested and executed—and the team is on the run! Zatanna and Detective Chimp (now possessed by Etrigan) must round up new and old teammates, including John Constantine, Ragman, and Madame Xanadu. Their mission? To battle the power-mad Crow King, Merlin, before his plans for magical domination destroy the fabric of reality. But where is Dr. Fate? And what led the team to disband in the first place? Discover the truth here! This title is fully returnable at a later date. Retail: $5.99

FUTURE STATE SUPERMAN WONDER WOMAN #1 (OF 2) CVR A LEE WEEKS
(W) Dan Watters (A) Leila Del Duca (CA) Lee Weeks
The sun has set on the heroes of the past, and a new age is dawning! As two arrogant gods challenge one another to a contest of strength, Superman and Wonder Woman are forced to take action to save their cities from the chaos. Together, Jonathan Kent and Yara Flor, man of science and woman of myth, have the potential to become something powerful, but that’s only if they can learn to get along! Can the two fledgling heroes put their differences aside long enough to save the world they have sworn to protect? This title is fully returnable at a later date. Retail: $3.99