In last week’s Future State: Wonder Woman, we met up with Yara Flor, the new Wonder Girl and future Wonder Woman, as she traipsed through the Brazilian rainforests meeting up with Brazilian mythical creatures and gods, and a trip to Hades in the fashion of a small city airport. It was a little wackier than some might have been expecting.

This week, the wackiness is maintained a little, because as well as a political adventure dealing with corrupt politicians in Brazil, we also get to see what else is up with Yara Flor and the Brazilian pantheon of gods she brings into the mix, alongside the Greek and Roman deities. The Future State Justice League defines her thus; 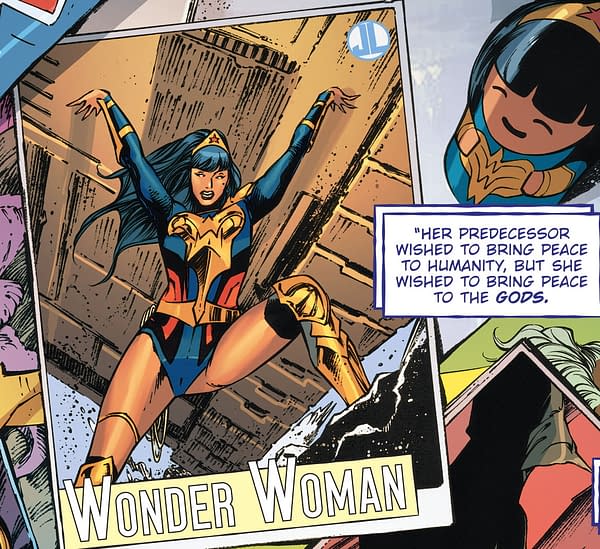 Someone who wants to bring peace to the Gods. Who will join the Caipora and the Boitatá on her journey? Future State: Superman/Wonder Woman #1 from DC Comics reveals all. 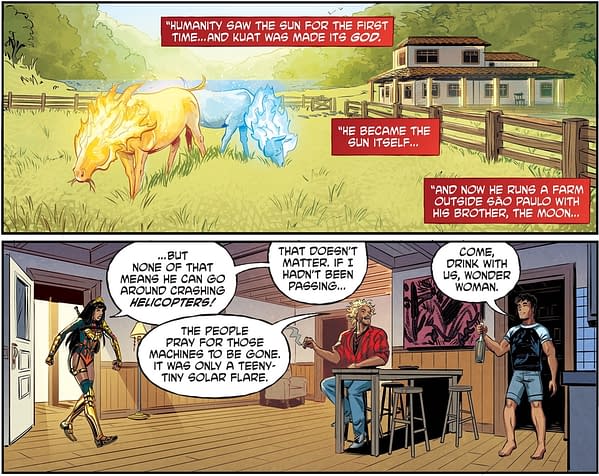 We have the Brazilian gods of the sun and the moon, Kuat and Ia, brothers running a farm together, and having to be dealt with by Yara Flor when they do stuff they shouldn’t be doing – like blinding the helicopter pilot of those corrupt politicians.

Kuat is the sun god and Iae is the moon god for the Mamaiurans, an Amazon Indian tribe that lives in Brazil. According to legend, at the beginning of time, there were so many birds in the sky that their wings prevented the daylight from being seen. It was always night and the people were forced to live in fear of attack from wild animals. Tired of the darkness, two Mamaiuran heroes, Iae and his brother Kuat, decided to force the king of the birds, Urubutsin, to give back some of the daylight. The two brothers hid inside a dead animal and waited until the birds approached. As soon as Urubutsin landed, Kuat grabbed Urubutsin’s leg. Unable to get away, Urubutsin was forced to make an agreement with the two brothers. The birds would share daylight with the Mamaiurans, and the day would alternate with the night. Kuat represented the Sun and Iae represented the Moon. And DC Future State gives them a farm and stallions. 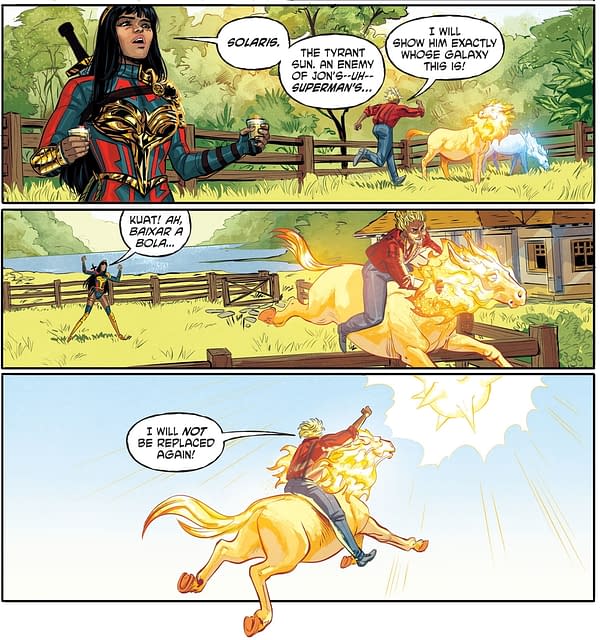 And an enemy to fight. Of course, Superman is also a bit of a sun-god – as is Apollo, who will be seen later in DC Future State. With Solaris in tow, there are suddenly more sun gods around than ever. 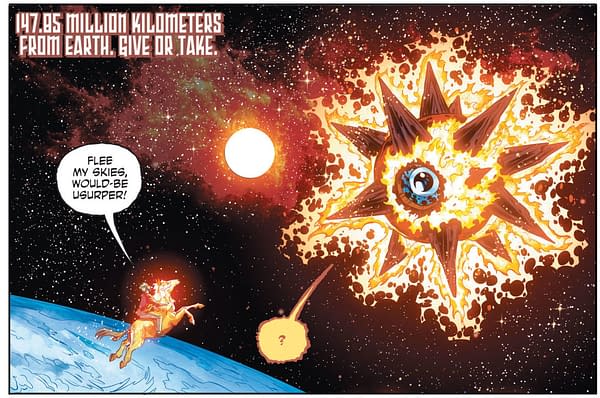 Though Jonathan Kent, the new Superman Of Metropolis may prefer a more mundane explanation. 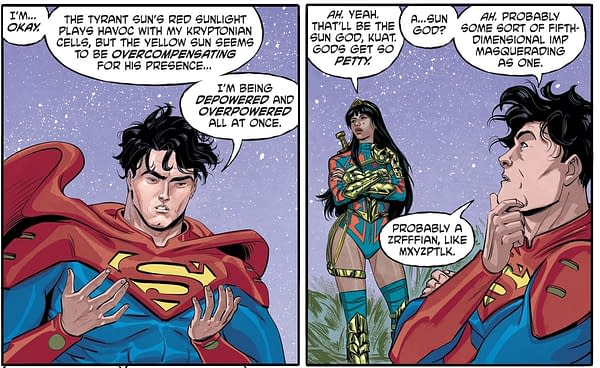 Given that fifth-dimensional imps are more mundane in the DC Universe than actual living gods walking around the place.

FUTURE STATE SUPERMAN WONDER WOMAN #1 (OF 2) CVR A LEE WEEKS
(W) Dan Watters (A) Leila Del Duca (CA) Lee Weeks
The sun has set on the heroes of the past, and a new age is dawning! As two arrogant gods challenge one another to a contest of strength, Superman and Wonder Woman are forced to take action to save their cities from the chaos. Together, Jonathan Kent and Yara Flor, man of science and woman of myth, have the potential to become something powerful, but that’s only if they can learn to get along! Can the two fledgling heroes put their differences aside long enough to save the world they have sworn to protect? This title is fully returnable at a later date. Retail: $3.99